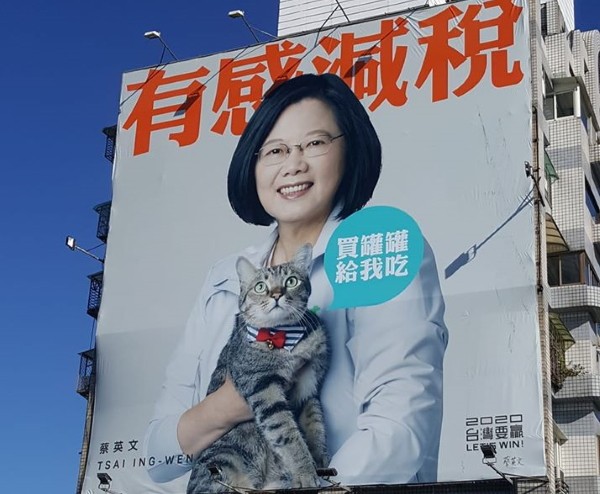 TAIPEI (Taiwan News) — As the Taiwan presidential race heats up, a massive billboard showing President Tsai Ing-wen (蔡英文) holding one of her cats has surfaced in Taipei.

On Saturday (Nov. 16), Tsai supporter Joey Gork captured this photo of the huge billboard on the east side of Taipei Bridge, just off the motorcycle on-ramp in the city's Datong District. Above Tsai's head in orange Chinese characters, the ad reads "Sensible tax cuts."

Below, Tsai can be seen holding her cat Think Think (想想), one of two pet cats, the other being Ah Tsai (阿才). A speech balloon next to her furry running mate reads, "Buy some canned food for me to eat."

On Sunday (Nov. 17), Gork posted the photo on the Facebook group Foreigners Society in Taiwan, where it received 129 likes and 18 comments. Many netizens found the ad cute, while others felt pets should be kept out of politics:

"All our cats belong to us."

"There are lots of voters who do not like pets or cats in particular ..."

"'I judge ability to effectively lead my country based on which pet my country's leader has' seems like a ridiculous way to choose a leader."