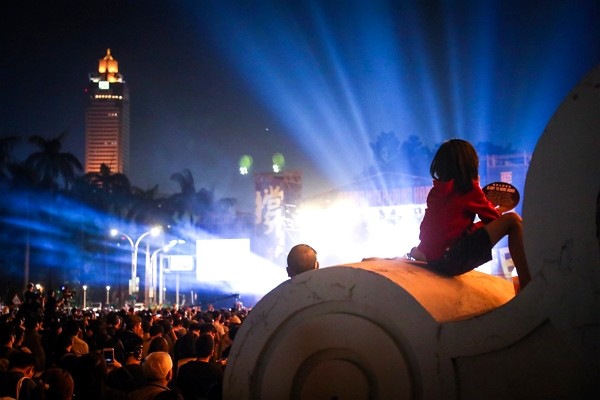 The concert, organized by the Defend Democracy Safeguard Taiwan Alliance, attracted thousands of Taiwanese dressed in black and holding large pro-Hong Kong banners the event organizers had distributed. Paper fans were also handed out to concert goers with the lyrics of the "Glory to Hong Kong" protest anthem printed on the back, reported UDN.

During the performance of "Island's Sunrise," a song Fire Ex. created for Taiwan's Sunflower Student Movement in 2014, Yang said it was unimaginable that a peaceful anti-extradition protest in March would escalate into the chaos of today. He then asked concert attendees to pray for the safety of Hong Kong's people, reported CNA.

Lin Xi (林夕), an award-winning Hong Kong lyricist, also made a surprise appearance, along with Hong Kong students living in Taiwan. Lin Xi said the situation in Hong Kong continued to worsen, and it is important for Taiwanese to remember that freedom has a price.

As the sky darkened and the concert came to a close, the crowd sang "Good night! Formosa!" and a version of "Glory to Hong Kong," in Taiwanese. A limited-edition album titled, "Stand with HK," which included all the songs at Sunday's concert, was sold at the event, with all proceeds going to the 612 Humanitarian Relief Fund in Hong Kong. Supporters of Hong Kong gather for the concert. (CNA photo)