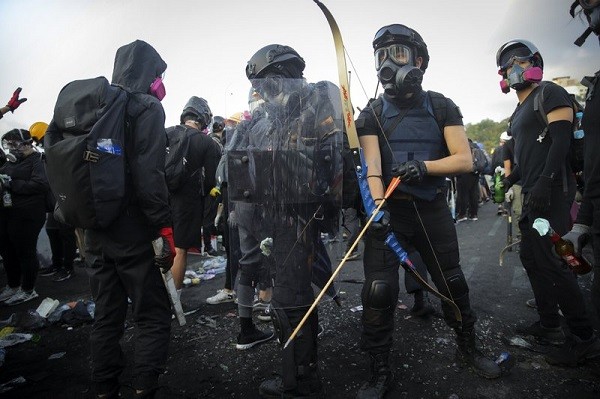 TAIPEI (Taiwan News) — In a moment reminiscent of medieval warfare, a Hong Kong police officer was shot with an arrow Sunday afternoon (Nov. 17) as police encroached on Polytechnic University (PolyU), where student protesters are digging in for the final assault to clear them out, reported South China Morning Post (SCMP).

Hong Kong police posted on Facebook that an officer belonging to the Force Media Liason Cadre had been struck by an arrow at around 2 p.m. near Kowloon Rosary Church, some 30 meters from the PolyU campus. The arrow pierced his calf, and he was promptly sent to Kwong Wa Hospital in southern Kowloon, wrote SCMP.

In their post, police condemned the "violent acts of all rioters" and said that "dispersal and arrest operations" were underway.

Shortly before the incident, two armored police vehicles and a pair of water cannons had been deployed to the campus, dowsing the brick buildings with blue dye, according to the report. Earlier that morning, protesters reportedly chased off people attempting to clear up roadblocks and police, in turn, continuously fired canisters of tear gas.

After riot police entered the Chinese University of Hong Kong on Tuesday, sparking clashes as students moved to fend them off, protesters across the city began fortifying universities with brick walls and barricades, defending their posts with Molotov cocktails, makeshift catapults, and college sports equipment, such as bows and arrows. One by one, the schools have been vacated, with PolyU reportedly the last still being occupied.