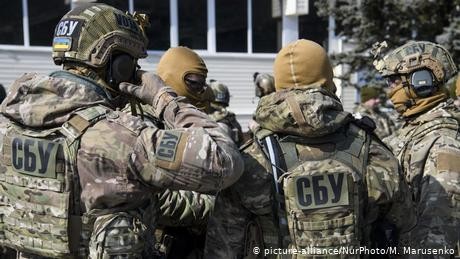 The Ukrainian Security Service (SBU) on Friday said it had arrested a Georgian national, Al-Bar Shishani, after he was identified in a photograph as a leading "Islamic State" (IS) commander.

Shishani was arrested in the Kyiv region near a private home where he lived, the service said in a statement without giving the date the arrest took place.

"A portrait examination has proved that the detained foreigner is indeed a wanted leader of the IS," the SBU said in a statement.

Ukrainian officials said Shishani was detained at the end of a joint operation with the US Central Intelligence Agency and the Georgian Interior Ministry.

Shishani, whose birth name was Cezar Tokhosashvili, joined IS in 2015. He became deputy to Abu Omar al-Shishahi, known to the Pentagon as the IS "minister of war," who was killed in combat in 2016.

Both men were born in the mountainous Pankisi region of Georgia home to most of Georgia's ethnic Chechens, known as Kists. Shishani is an Arabic transliteration of Chechen.

After Abu Omar al-Shishahi's death, Al Bara Shishani was said to have crossed into Turkey and crossed last year into Ukraine on a false passport. From there, he continued to coordinate the activities of Islamic State, the SBU said.

"Currently, the terrorist is under extradition arrest. His involvement in crimes committed on the territory of Ukraine is currently being verified," the SBU said, without verifying