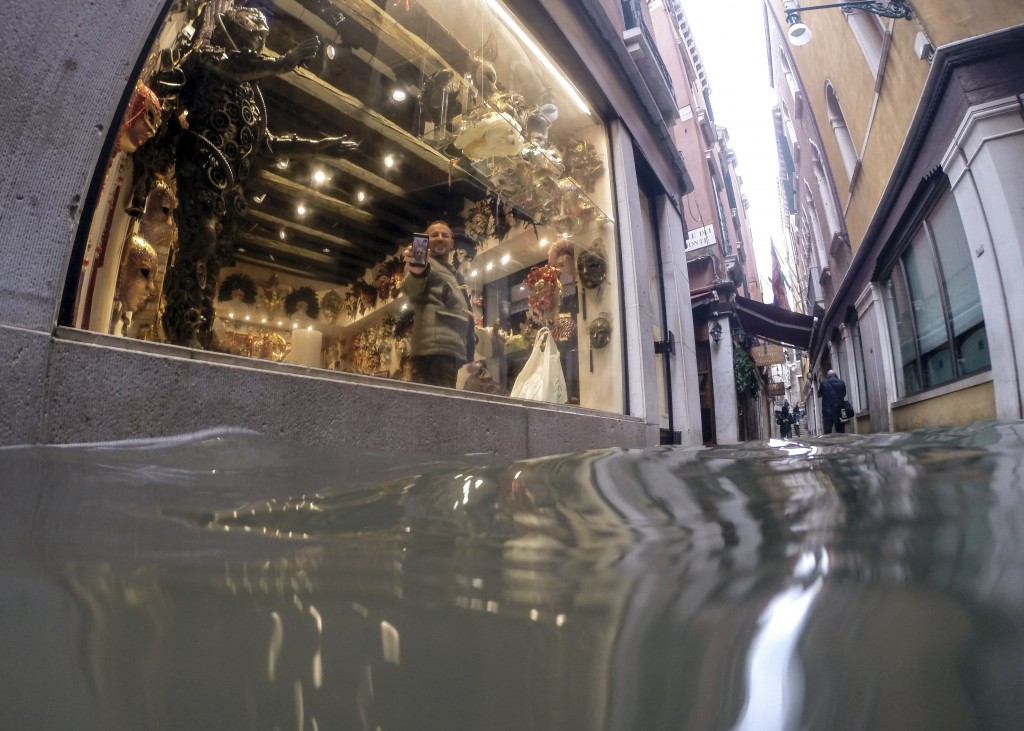 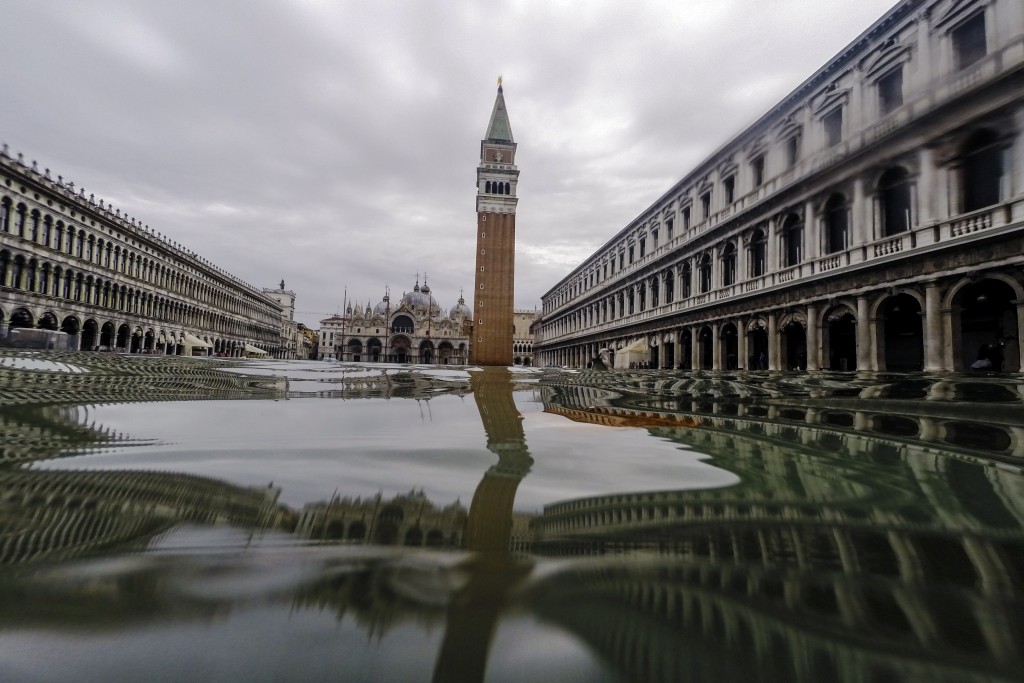 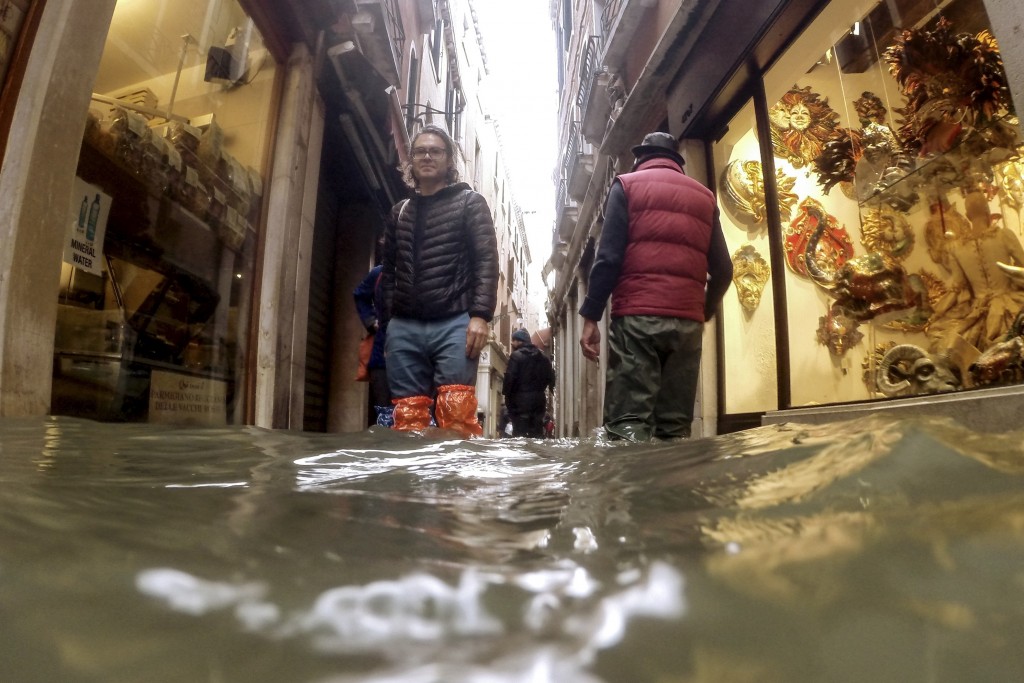 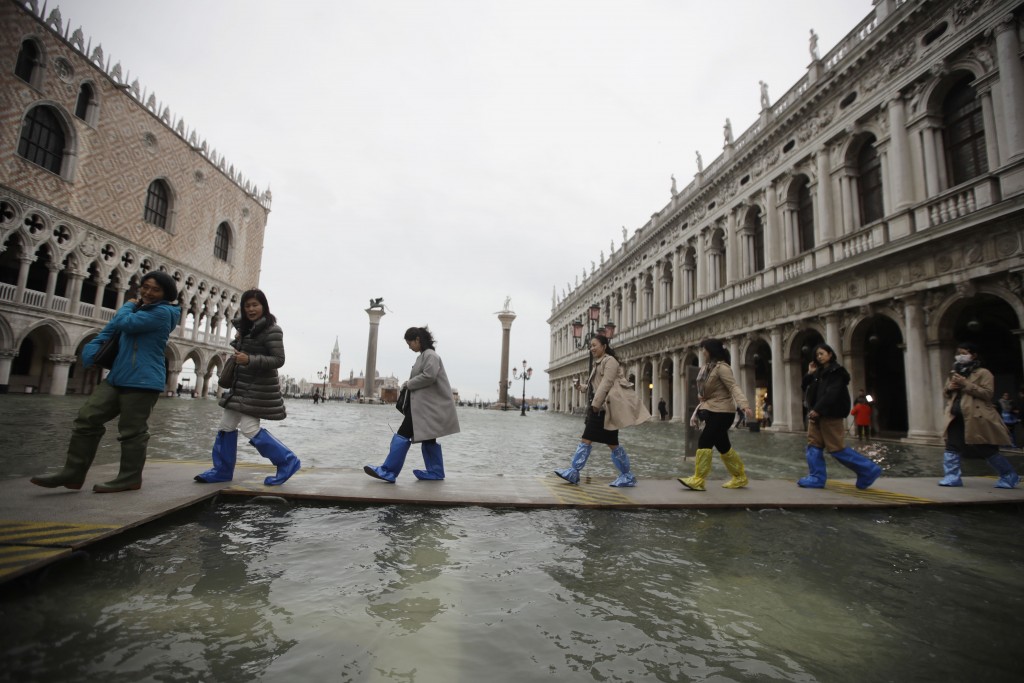 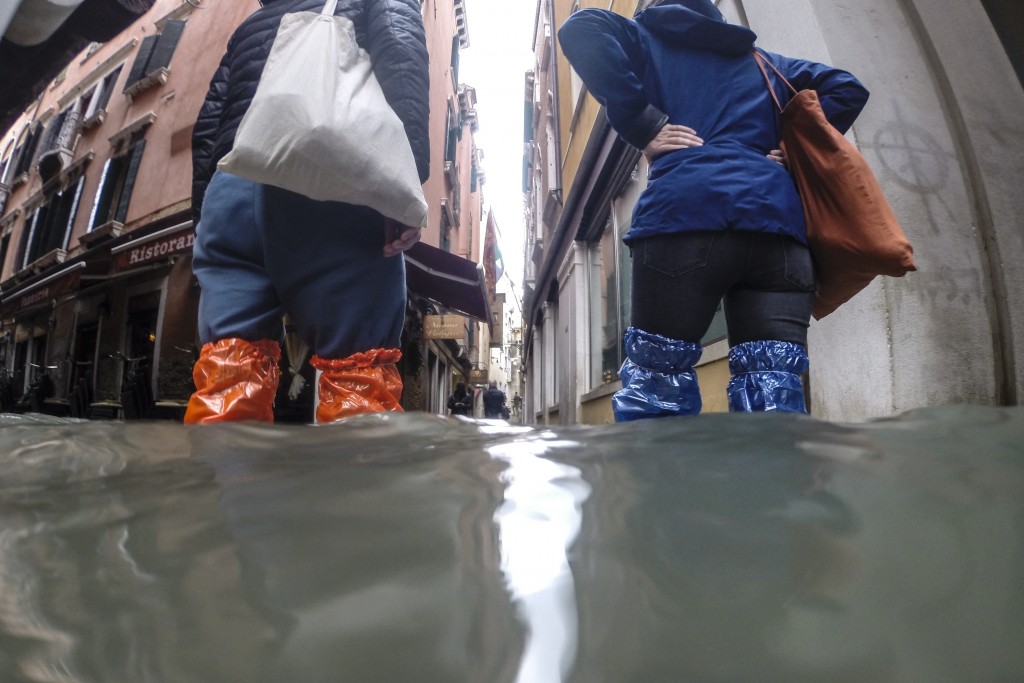 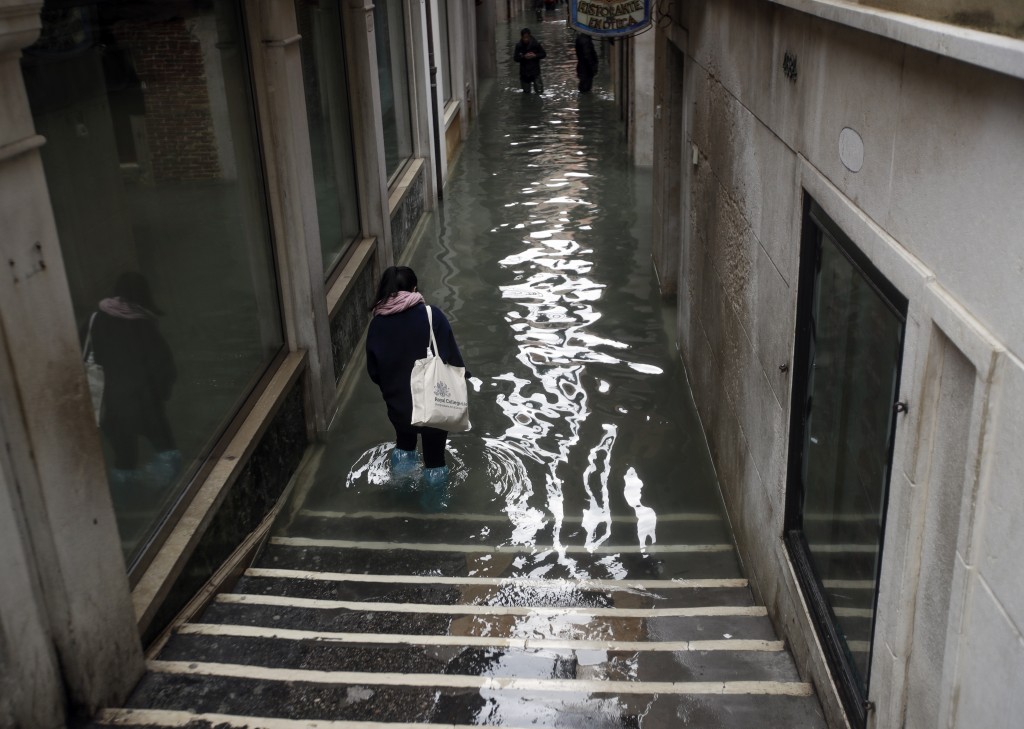 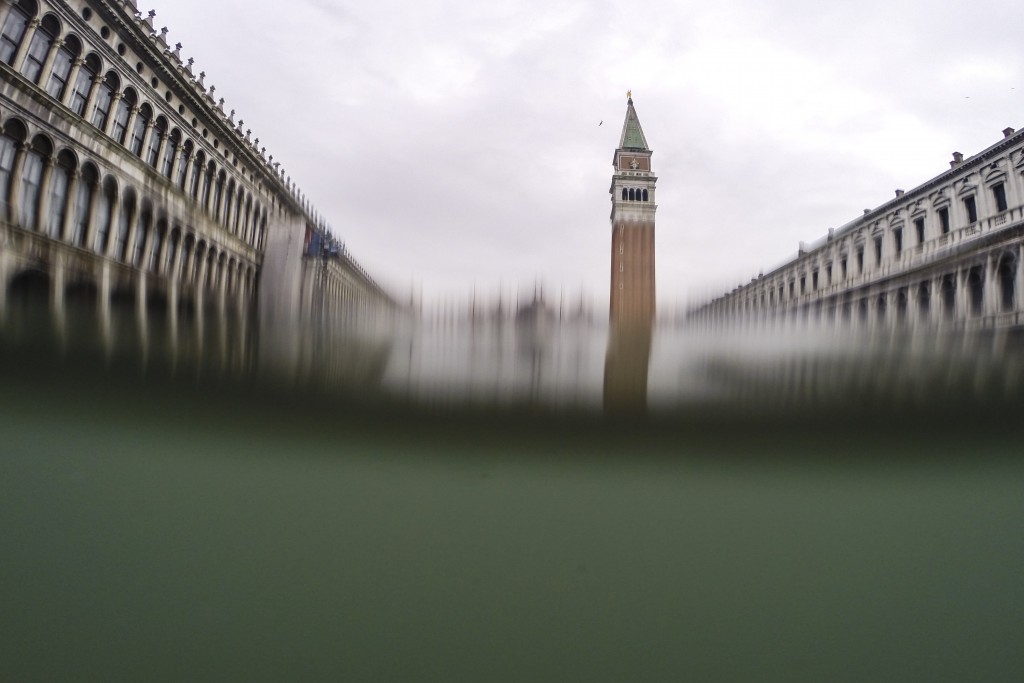 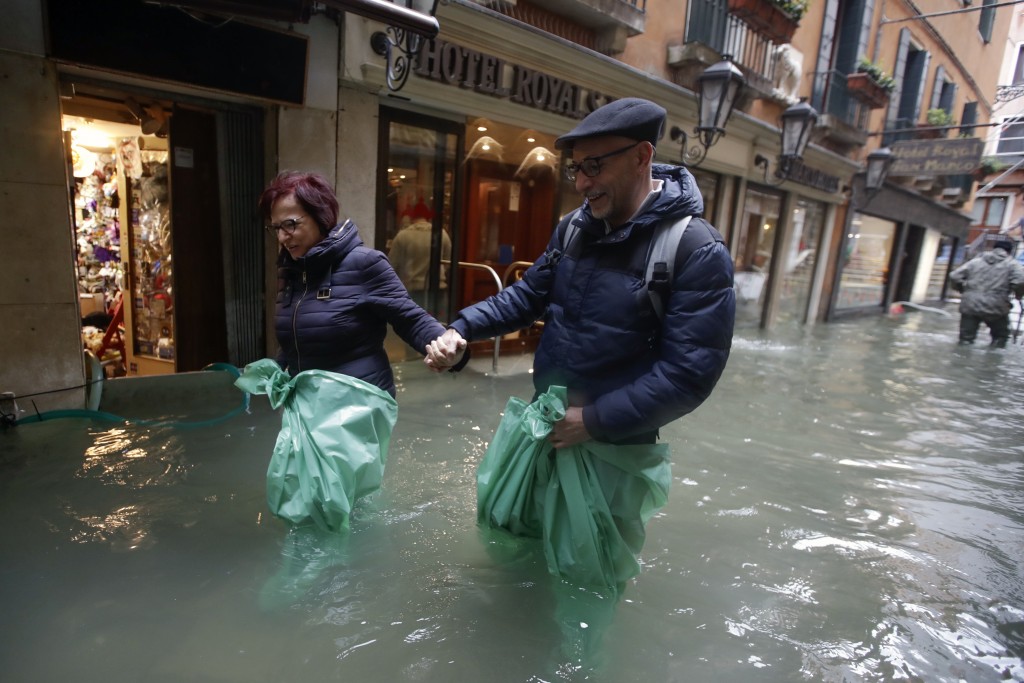 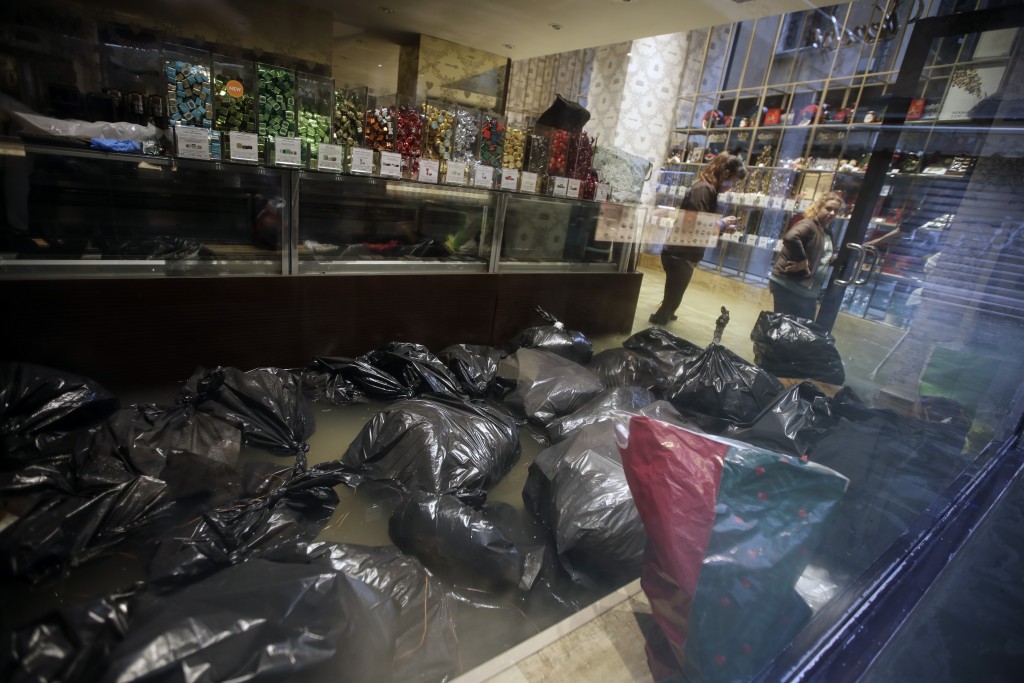 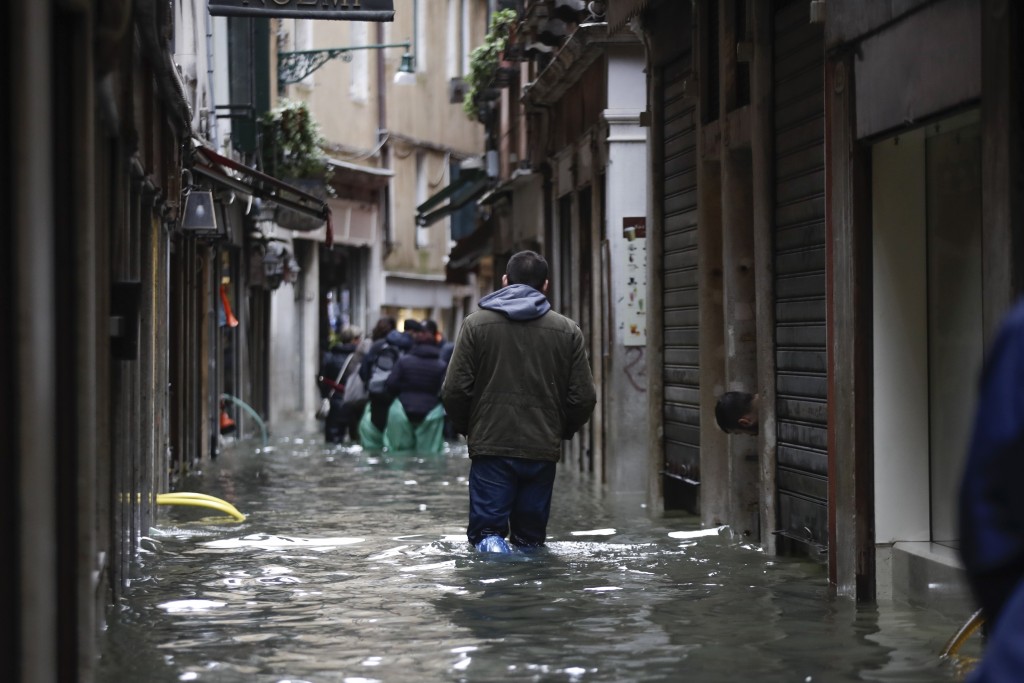 MILAN (AP) — The historic lagoon city of Venice exists on the edge of a double threat: As it sinks, the seas rise.

That reality became more stark this week when Venice was hit with its worst flood in over 50 years, caused by a nearly 1.9 meter (6-foot) tide that sent waist-high water flowing through St. Mark’s Square, cast the city’s world-famous gondolas onto walkways, and threatened its medieval, Baroque and Renaissance art and architecture.

Damage to the City of Canals from the second-worst flood ever recorded was put at hundreds of millions of euros (dollars).

Against the backdrop of the disaster, a corruption-riddled underwater barrier system that was supposed to protect the city still is not operational after more than 16 years of construction and at least 5 billion euros of public funds. It was supposed to be working by 2011.

“It has been a generation of panels and engineers that have been working on it. No one can actually tell if it will actually be operational,” said Mechtild Rossler, director of the UNESCO World Heritage Center in Paris, which lists Venice as one of its legally protected World Heritage sites because of its cultural and historical significance.

Called Moses — from the Italian acronym for experimental electromechanical modules, but also a nod to the biblical figure who parted the Red Sea — the system of 78 underwater barriers is designed to be raised as needed to block openings to the lagoon and hold back tides of 1.1 to 3 meters.

That would still leave exposed the lowest areas of the city, or about 12% of its area, including St. Mark’s Square.

Though nearly completed, the project still has not been even partially tested, and some parts have already started to corrode. It has also been marked by bribery scandals and overruns. Its initial costs were projected at 1.6 billion euros.

Even with the emergency, Moses won’t be operational before the end of next year.

At the same time, the threats to the city of a quarter-million people are growing.

While the latest round of flooding has been attributed mostly to a combination of high tides from a full moon and high winds pushing water from the shallow Adriatic Sea into Venice, climate scientists note that exceptional tides — those over 1.4 meters — have become much more frequent in the past two decades.

Of the 20 exceptional tides recorded from 1936 through Tuesday’s, more than half have occurred since 2000.

“It is a long-term issue. It is not the issue of one flood, we restore, and we go back to normal,” Rossler said.

Climate scientist Stefan Rahmstorf of the University of Potsdam estimates that one-third of Venice’s increasing vulnerability is due to global warming, which has raised the sea level.

“The rest is mostly man-made,” he said.

The 1,600-year-old city is built on uncompacted settlement, which is sinking. Venice’s Tide Office said the net effect of the sinking and the rising sea has been a 30-centimeter (12-inch) drop since record-keeping began in 1873. About 10 to 11 centimeters of that took place since the last big flood, in 1966.

Venice is being monitored for inclusion on a list of World Heritage sites in danger, which serves as a call to action to the international community.

Other problems threatening the city include large numbers of tourists, which put stress on a city where even something as simple of trash collection must be done by boat, and the passage of cruise ships through St. Mark’s Basin.

The vessels release pollution, displace water into the city and carry other safety risks. Over the summer a cruise ship crashed into a boat and a dock.

The historic flooding only underscores the urgency to resolve Venice’s problems.

Even opponents of Moses, who have complained that it is technically flawed, too costly and damaging to the environment, now see it as the only expedient solution.

“We have to be pragmatic. Moses is almost done,” said Toto Bergamo Rossi of Venice Heritage, a nonprofit focused on conservation.

“Maybe it is the wrong project, but we have spent 5 billion euros, a number I cannot count. They have to finish, they have to rush to finish,” he said. “I hope this kind of catastrophe will finally give the right attention to Venice, because this city needs to be treated in a different way.