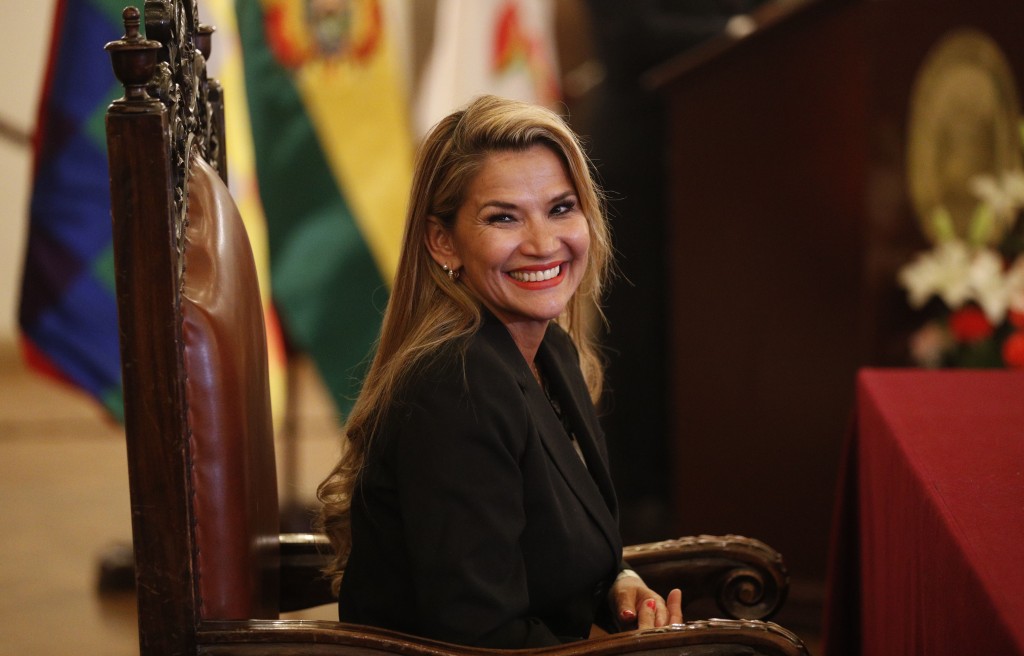 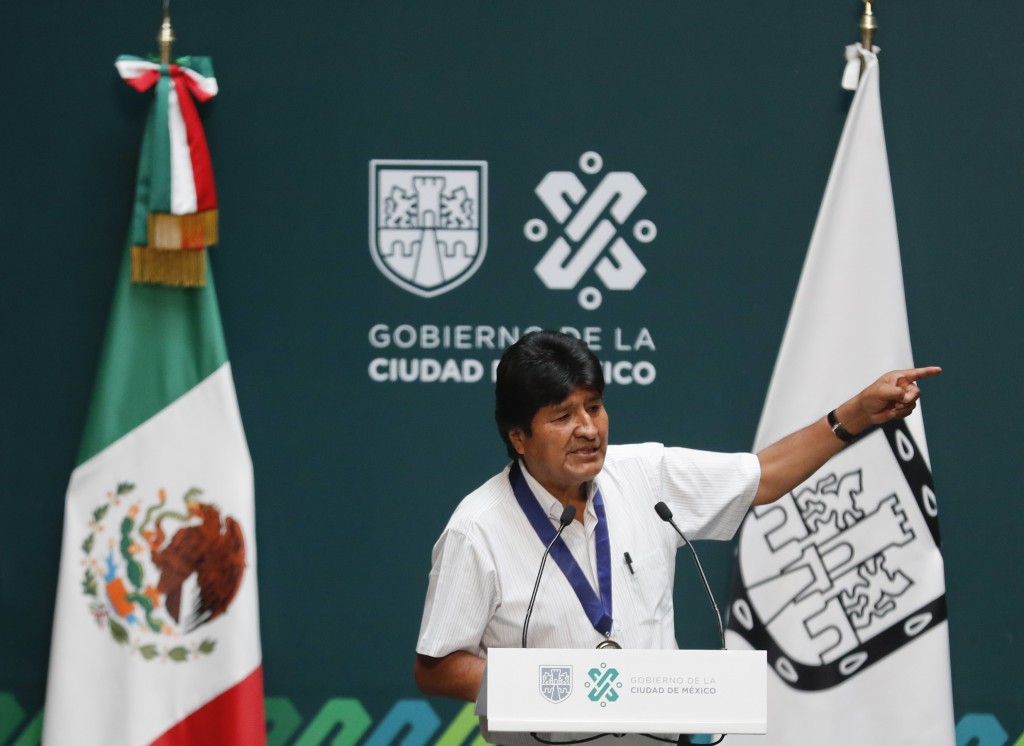 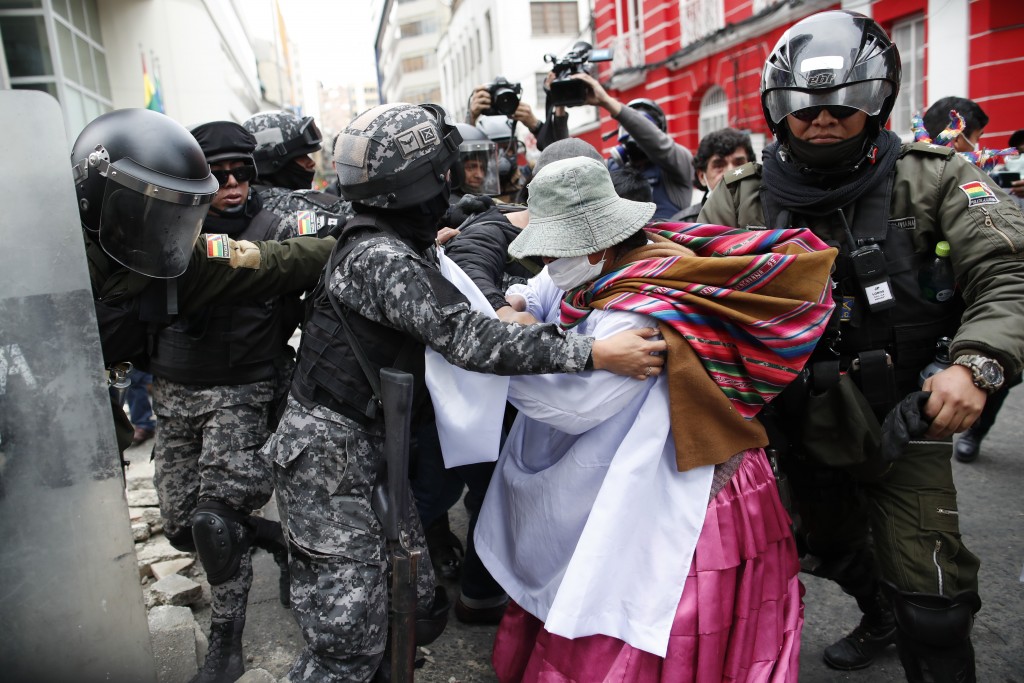 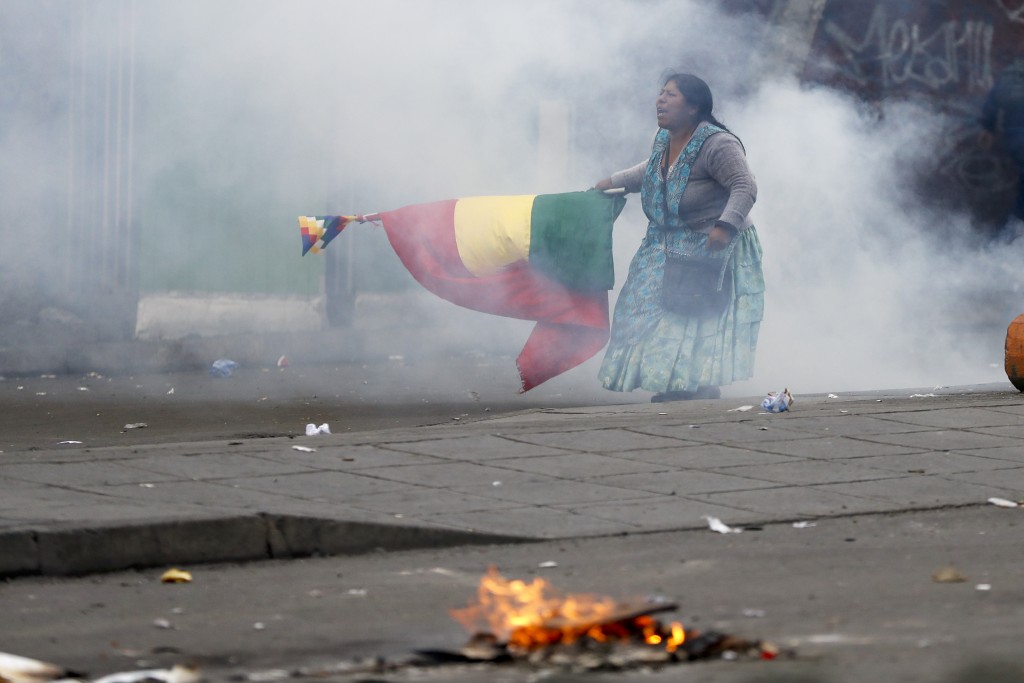 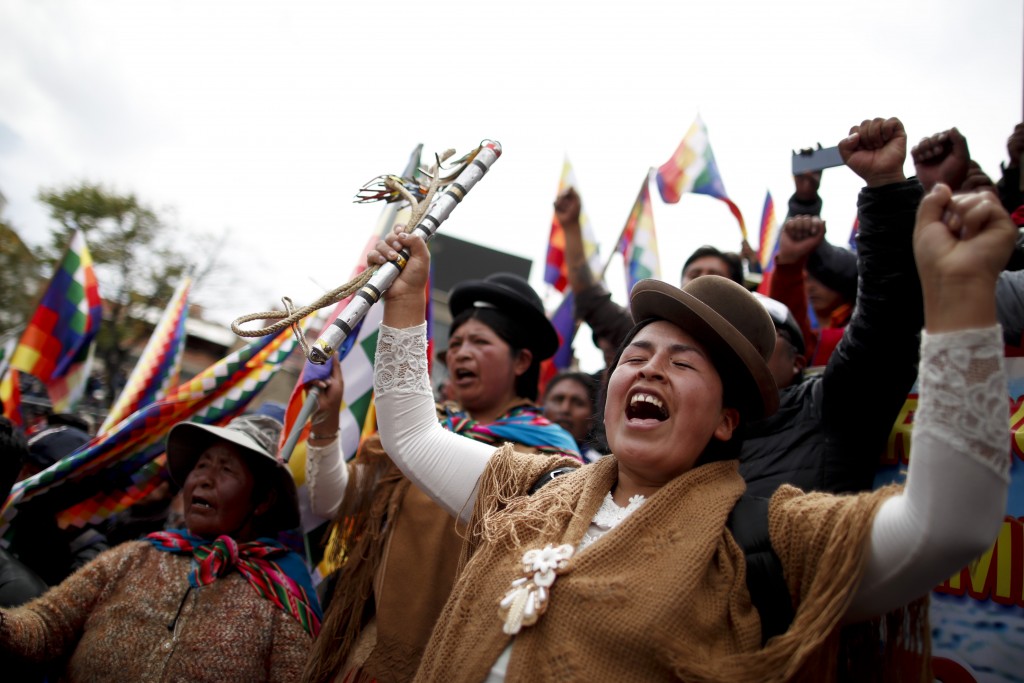 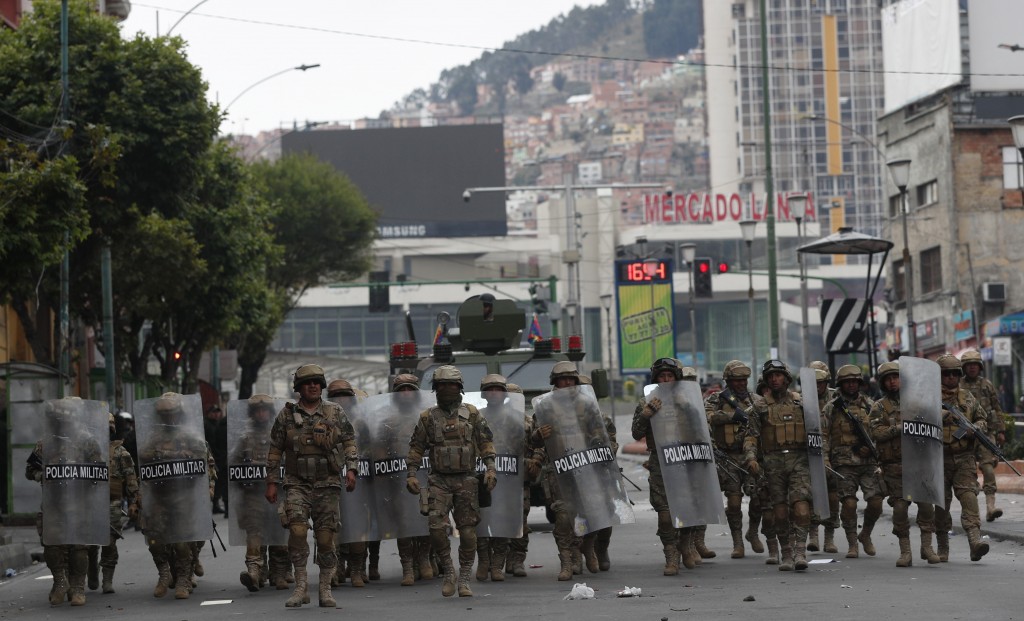 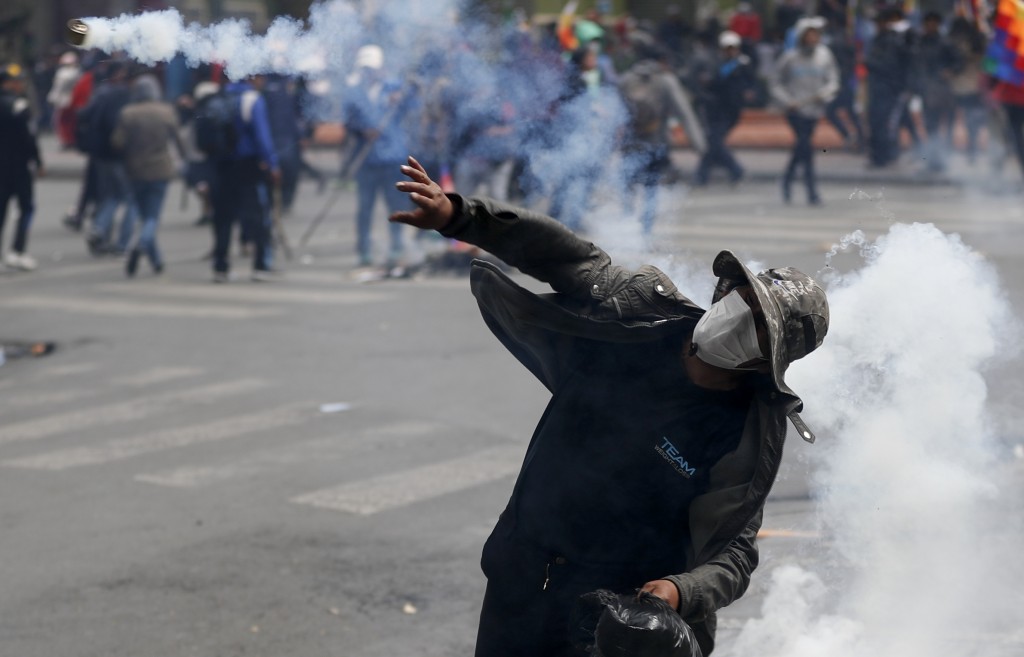 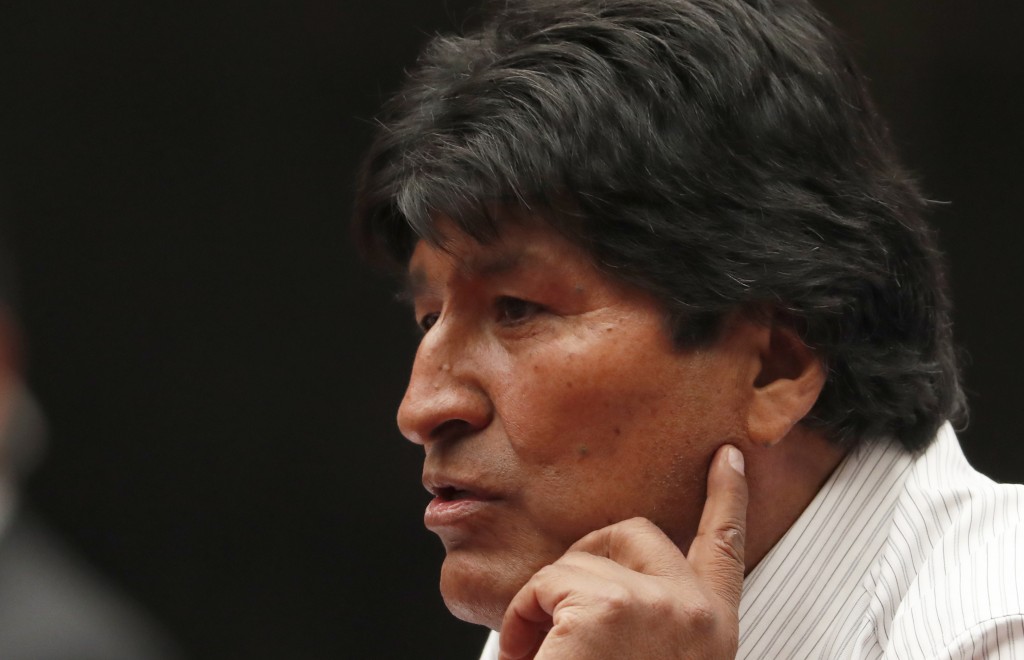 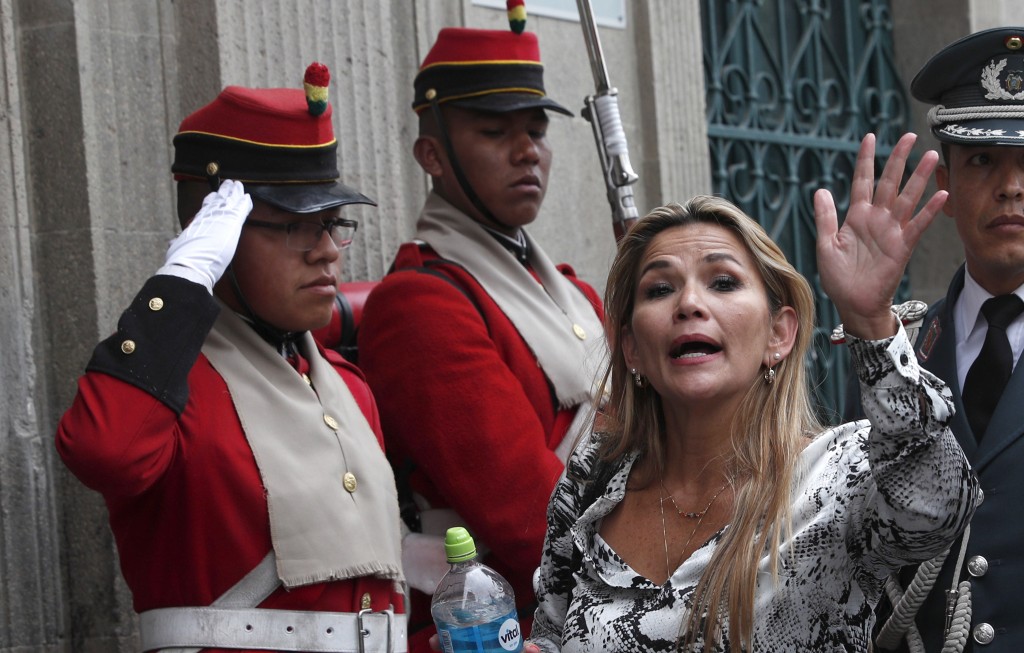 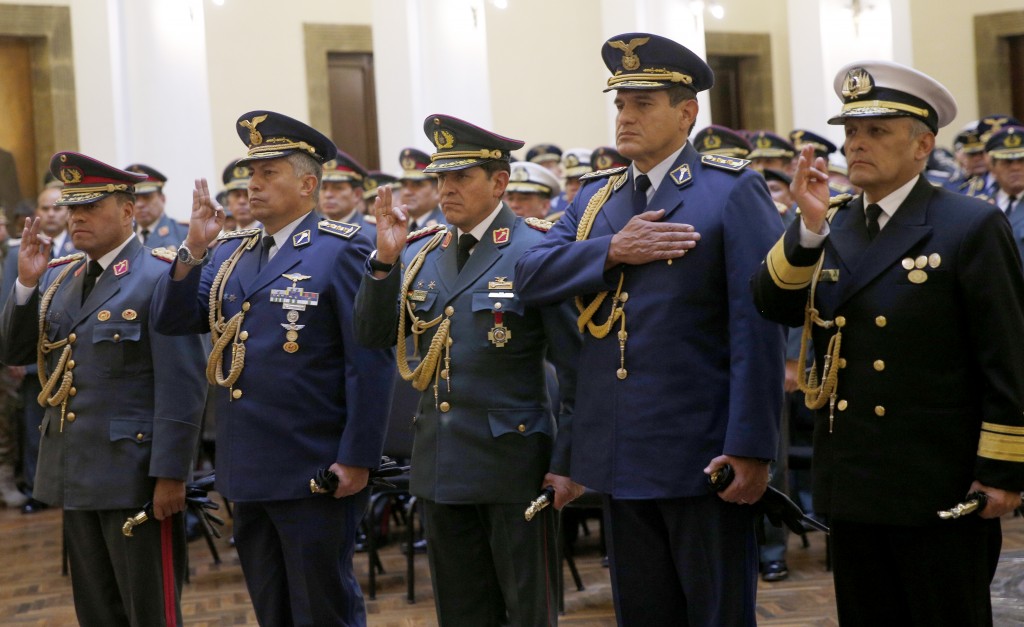 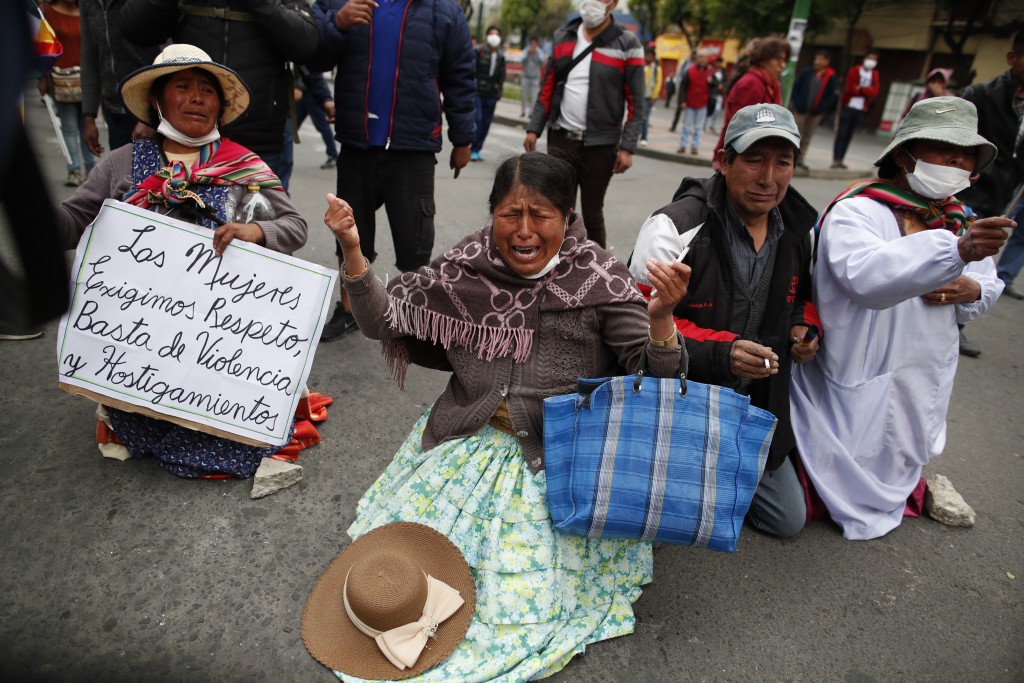 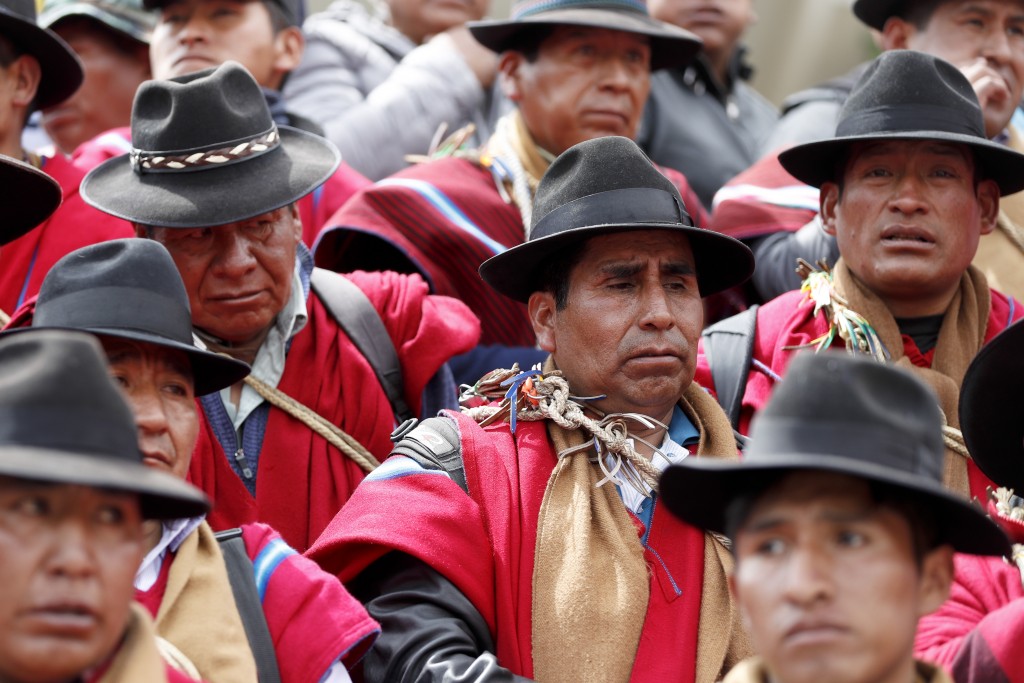 LA PAZ, Bolivia (AP) — Where does the power line stand in crisis-torn Bolivia?

Jeanine Añez, the Senate leader who has claimed the interim presidency of the Andean country, seems to have the backing of the police, the military and the Roman Catholic Church.

But even in self-exile in Mexico after resigning under pressure from the armed forces, former President Evo Morales says he would be willing to return to Bolivia, and his supporters are making a show of force in the streets while his party controls a majority in both houses of Congress.

Then, violent clashes erupted between Morales loyalists and police in Bolivia’s capital and raged well into the night. His supporters also flooded into the streets of La Paz’s sister city of El Alto, a Morales stronghold, waving the multicolored indigenous flag and chanting, “Now, civil war!”

Rock-throwing demonstrators in downtown La Paz tore off corrugated metal and wooden planks from construction sites to use as weapons, and some set off sticks of dynamite. Police in riot gear responded with volleys of tear gas as fighter jets roared low over the crowd in a show of force.

It is a sign of the challenges facing Añez, who was a second-tier lawmaker before she thrust herself into the presidency, citing the power vacuum created by Morales’ departure.

She needs to win recognition, stabilize the nation and organize new elections within 90 days, rebuilding after weeks of violent protests against Morales over his disputed claim to have won the Oct. 20 election amid claims of vote fraud. The upheaval, and an erosion in his support, led Bolivia’s first indigenous president to fly off to Mexico after nearly 14 years in power.

“If this is seen by the indigenous social movement as an effort by the old elite to restore the old order in Bolivian society, I think that is a recipe for tremendous political conflict,” said Kenneth Roberts, professor of government at Cornell University in Ithaca, New York.

Morales upended politics in this nation long ruled by light-skinned descendants of Europeans by reversing deep-rooted inequality. The economy grew strongly thanks to a boom in prices of commodities and he ushered through a new constitution that created a new Congress with seats reserved for Bolivia's smaller indigenous groups while also allowing self-rule for all indigenous communities.

Although some of his supporters had been disenchanted by his insistence on holding on to power, he remains popular, especially among other members of his native Aymara ethnic group. Many of them worry they might lose their gains, and they have been protesting reports that the multicolored Wiphala flag that represents them has been burned by people who sympathize with the opposition.

“More than 13 years of progress under Evo were lost in a minute when he resigned,” said Magenta Villamil, a demonstrator. “They have not only burnt a flag — it’s the indigenous peoples.”

Añez also faces a challenge in Congress, where lawmakers loyal to Morales began mounting a challenge to her legitimacy by trying to hold new sessions that would undermine her claim to the presidency. The sessions — dismissed as invalid by Añez’s faction — added to the political uncertainty.

Morales’ backers, who hold a two-thirds majority in Congress, boycotted the session that she called Tuesday night to formalize her claim to the presidency, preventing a quorum.

She claimed power anyway, saying the constitution did not specifically require congressional approval. Bolivia’s top constitutional court issued a statement laying out the legal justification for Añez taking the presidency — without mentioning her by name.

But other legal experts questioned the legal technicalities that led to her claim, saying at least some of the steps required Congress to meet.

Eduardo Gamarra, a Bolivian political scientist at Florida International University, said the constitution clearly states that Añez didn’t need a congressional vote to assume the presidency. Even so, the next months “are going to be extraordinarily difficult for President Añez,” he said.

She will need to form a new electoral court, find non-partisan staff for the electoral tribunal and get Congress, which is controlled by Morales’ Movement for Socialism Party, to vote on a new election.

Bolivia’s crisis escalated Sunday, when an Organization of American States audit reported widespread irregularities in the Oct. 20 election and called for a new election.

Morales said he agreed Bolivia should hold a new election, but a few hours later he resigned after Gen. Williams Kaliman, the armed forces commander, urged him to step down “for the good of Bolivia.” Kaliman had been a Morales loyalist, but the departed president and his backers have called the general’s action a coup d’etat.

Añez swore in a new Cabinet on Wednesday, and she named new commanders-in-chief for all branches of the military, including replacing Kaliman. The move was seen as an effort to build an alliance with the military.

She also met with dozens of police officers and assured them they would get the working conditions that they demanded and never got under Morales. Police officers outside Bolivia’s presidential palace abandoned their posts and in some cities declared mutinies a day before Morales resigned.

Añez has also received the backing of Morales’ main election rival, former President Carlos Mesa, who came in second in the Oct. 20 ballot. But it’s uncertain how much support she could count on from other Bolivian power centers.

There has been some international support, too.

Michael G. Kozak of the U.S. State Department's Bureau of Western Hemisphere Affairs welcomed her as “interim constitutional president.” Brazil, which is one of Bolivia’s top trading partners, congratulated her on her “constitutional” assumption of the presidency.

But in Argentina, where a large Bolivian population lives, lawmakers in both houses of Congress condemned what they called a coup.

And in Mexico, Morales himself looms.

He is promising to remain active in Bolivia’s politics and mayors loyal to him in Bolivia’s countryside have continued to mobilize large crowds.

At a Wednesday news conference in Mexico, Morales said, “If the people ask me, we are willing to return.”