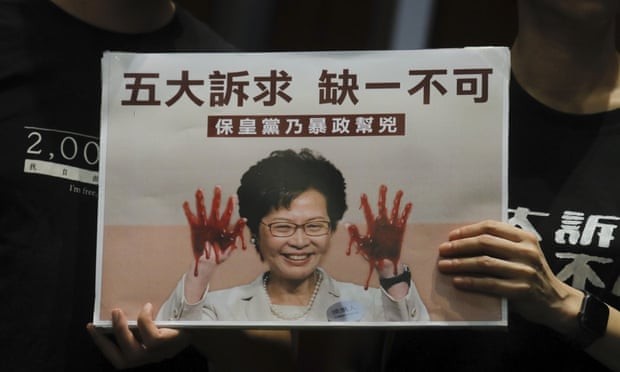 TAIPEI (Taiwan News) — As violence continues to erupt at the Chinese University of Hong Kong (CUHK) and other college campuses in Hong Kong, Taiwan President Tsai Ing-wen (蔡英文) on Wednesday (Nov. 13) said the blood of Hong Kong's youth should not be spilled to "decorate the faces of Beijing authorities" and called on the Hong Kong government to "stop acts of repression before it's too late."

In the wake of the shooting of a Hong Kong protester on Monday (Nov. 11) and violent clashes between police and students at Hong Kong universities starting on Tuesday (Nov. 12), Tsai took to Twitter to compare the atrocities being committed in Hong Kong to the White Terror period in Taiwan — and called for their end.

Tsai wrote that, much like the Hong Kong police have done this week on college campuses, military and police during the White Terror period in Taiwan "entered school campuses to arbitrarily arrest students and suppress their freedoms." She lamented that it was a painful period in Taiwan's history and admonished the Hong Kong government not to repeat the same mistakes.

She wrote that the scenes of police charging into Hong Kong college campuses to repress students harkens back to Taiwan's "dark past" and has become a "present reality in Hong Kong." She reminded Hong Kong leaders that law enforcement is meant to "protect the people," while government is in place to "serve the people," and when these two duties are not met, the people "lose their trust in government."

Tsai then called on the government of Hong Kong to "stop these acts of repression before it's too late." She asserted that the voices of the people should not be met with violence, and more ominously wrote that the "blood of young Hongkongers should not be sacrificed to decorate the faces of the Beijing authorities."

She pointed out that Hong Kong is on the frontline of the global war against the expansion of authoritarianism. She then called on the international community to stand with Hong Kong in the name of freedom and democracy.

Law enforcement exists to protect the people & government exists to serve the people. I call on the international community to take action & #StandWithHongKong against these acts of repression. Full statement: pic.twitter.com/Rdh8ggD9NV