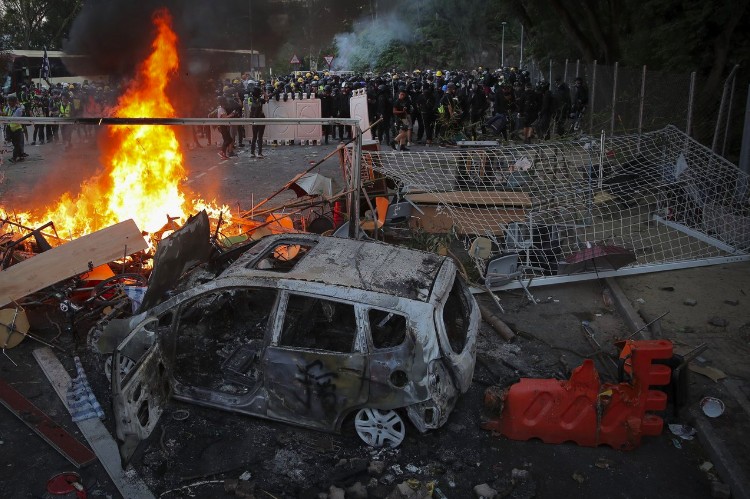 In the wake of the shooting of a Hong Kong protester on Monday (Nov. 11) and violent clashes between police and students at the city's universities starting on Tuesday (Nov. 12), Chiang took to Facebook on Wednesday to write:

"Students and young people in Hong Kong are not afraid of the forceful crackdown by the Hong Kong police. [To those who] raise a voice and shout to the world in order to defend freedom and democracy, I must pay the highest respect for such bravery."

As for the tattered "one country, two systems" framework being used and abused in Hong Kong, Chiang wrote:

"In Taiwan, there is no room for 'one country, two systems,' and the constitutional system of democracy and freedom cannot be damaged or compromised."

Chiang also called on Taiwan's government to assist Taiwanese students in Hong Kong. As of press time, 284 have already been evacuated.

Chiang added that humanitarian aid should also be provided to Hong Kong's people:

"In addition to paying close attention to and maintaining the personal safety of Taiwanese students studying and working in Hong Kong, the government should also provide Hong Kong people with humanitarian assistance when necessary."

In the 11 hours since Chiang's post went online, it has received 18,000 likes, 6,000 comments, and 1,000 shares. Many die-hard KMT supporters who follow the page were horrified at his stance on the "one country, two systems" framework and called for his resignation.

Many in the KMT party cling to the belief that "one country, two systems" is a viable roadmap to peaceful relations and potential unification with Communist China. However, the track record for the framework in Hong Kong has been less than stellar, with China reneging on a promise of true universal suffrage, leading to the 2104 Umbrella Movement and a proposed bill to extradite suspects to Beijing, which led to the current Hong Kong protests.