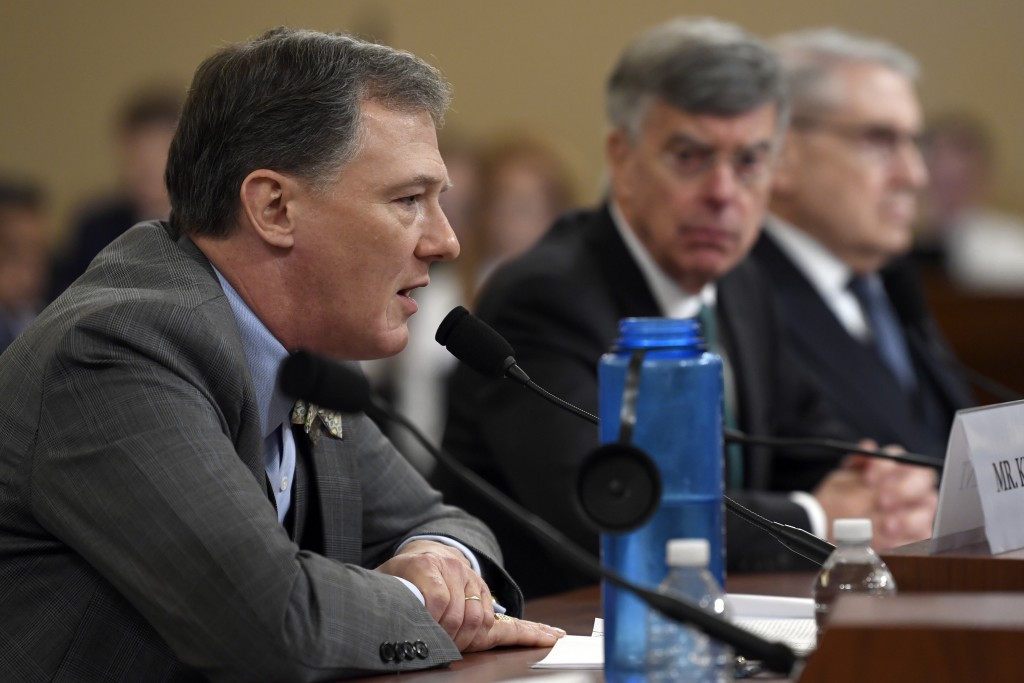 WASHINGTON (AP) — The start of public impeachment hearings unfolding in Congress marks the first time the American public can watch and listen to the witnesses at the heart of the matter.

In several hours of testimony, and even bickering among lawmakers, some memorable moments have emerged.

Hearings like this one can be scripted affairs. But on Wednesday, there was one early surprise.

William Taylor, the top diplomat in Ukraine, revealed for the first time that his staff members overheard the president speaking on the phone to another diplomat about investigations.

Taylor said some of his staff members were at a restaurant with Ambassador to the European Union Gordon Sondland on the day after the July 25 call between President Donald Trump and Ukraine's newly elected president, Volodymyr Zelenskiy.

Sondland used his cellphone to call Trump from the restaurant and the staff members could hear Trump on the phone asking about “the investigations.” Taylor took that to mean investigations into the Bidens and the Burisma Group, the Ukrainian firm that had hired Hunter Biden as a director in 2014, he told lawmakers.

Sondland told the president that the Ukrainians were ready to move forward, and after the call, one of Taylor’s staffers asked Sondland what Trump thought about Ukraine, he said.

“Ambassador Sondland responded that President Trump cares more about the investigations of Biden, which Giuliani was pressing for,” Taylor said in his opening statement.

“I take it the import of that is that he cares more about that than he does about Ukraine?” Schiff asked Taylor.

Taylor said he only learned about the call last Friday and didn’t know about it when he appeared for a closed-door deposition with House investigators conducting the impeachment inquiry.

The witnesses — one a Vietnam War veteran and West Point graduate, the other a career foreign service officer whose family has served the country for generations — nodded to the history of the moment with language both lofty and personal.

Their phrasing laid bare the stakes of the proceedings even as some Republicans sought to minimize them, and their intentional references to serving under presidents of both parties were aimed at pre-empting Republican attacks on them as political partisans. That didn’t stop Rep. Devin Nunes, the top Republican on the House intelligence committee, from deriding the witnesses as being part of a smear campaign, “star chamber” from within the civil service.

William Taylor, the top U.S. official in Ukraine, capped his opening statement with an ode to how Americans feel in their best moments about their country: "less concerned about what language we speak, what religion if any we practice, where our parents and grandparents came from; more concerned about building a new country."

For his part, George Kent singled out by first name and even nickname the impeachment witnesses who were born abroad, likening them to 20th century national security policy: Henry Kissinger and Zbigniew Brzezinski, both immigrants.

William Taylor was unsparing, and colorful, in his characterization of making military aid to Ukraine contingent on the country announcing investigations into the 2016 U.S. election and into Trump’s political rival Joe Biden.

He was presented with oversized images of a September text message exchange with two other envoys in which he said it would be “crazy” to not provide military assistance to the former Soviet republic for domestic political gain. Those text messages were the among the first documentary pieces of evidence to become public as part of the House impeachment inquiry, and established not only the possible contours of a quid pro quo but also laid bare diplomatic concerns about the Trump administration’s dealings with Ukraine.

Asked to elaborate, Taylor said, “It was counterproductive to all of what we had been trying to do. It was illogical, it could not be explained, it was crazy.”

Security assistance to Ukraine, he said, was not only critical to that country but also to America’s own national interests.