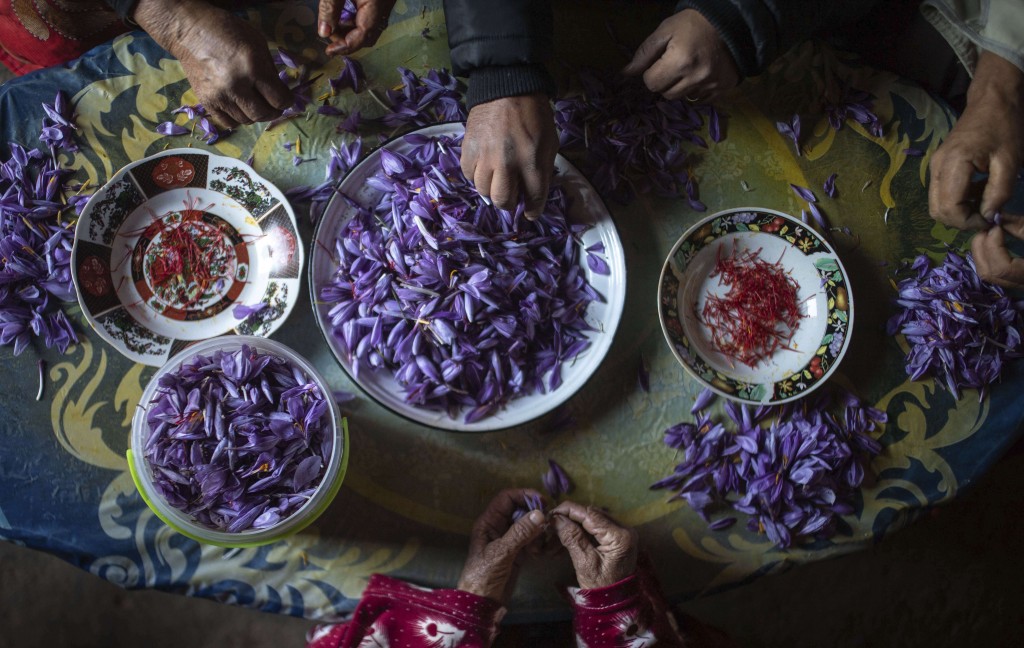 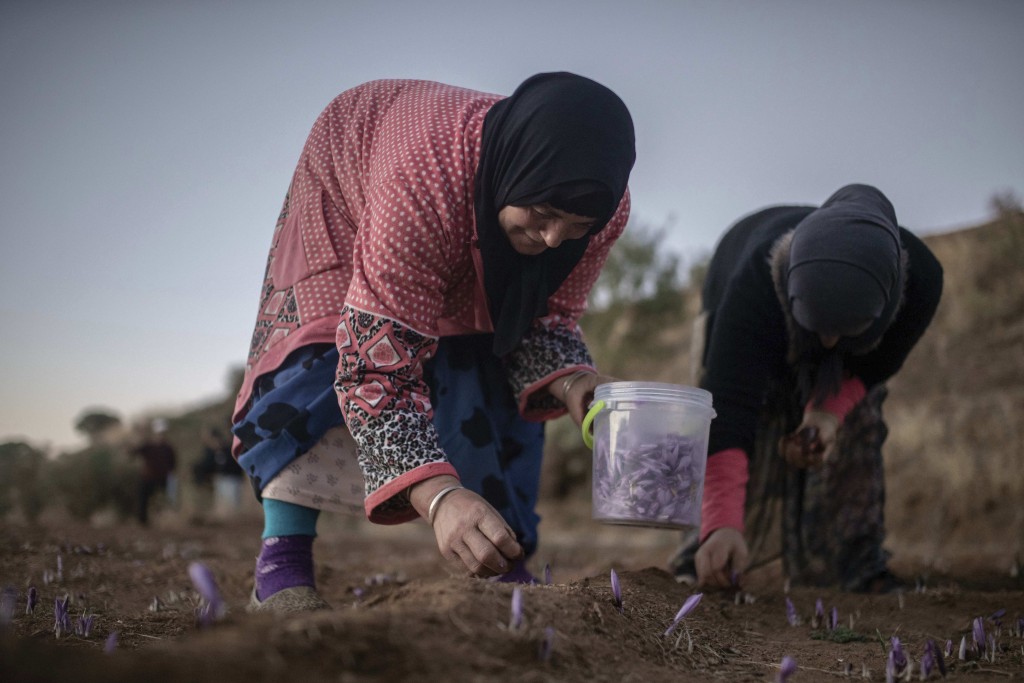 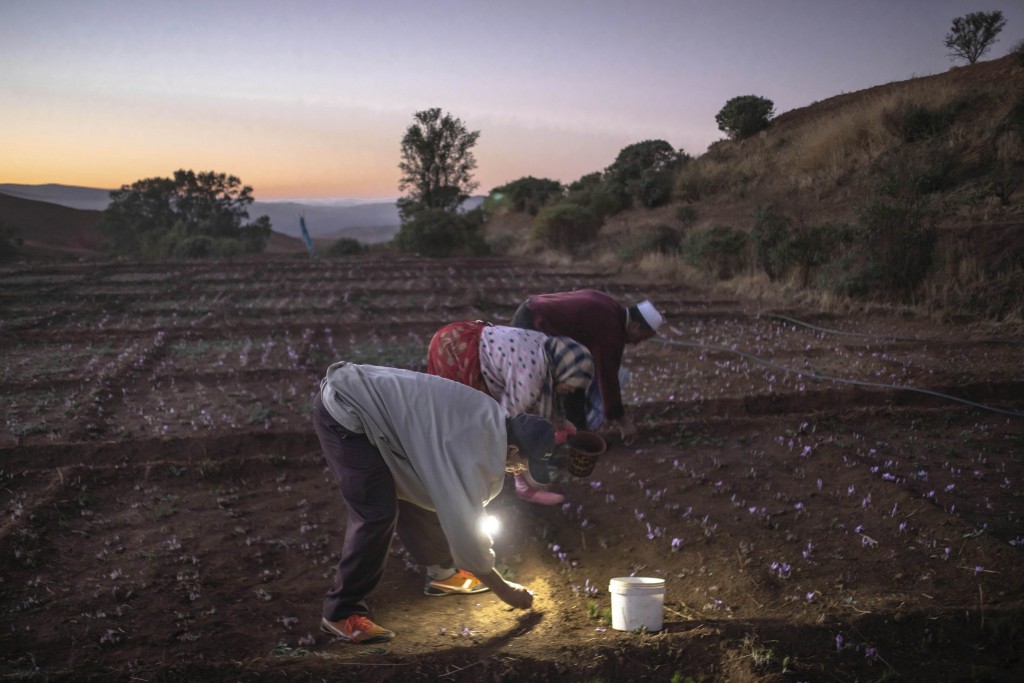 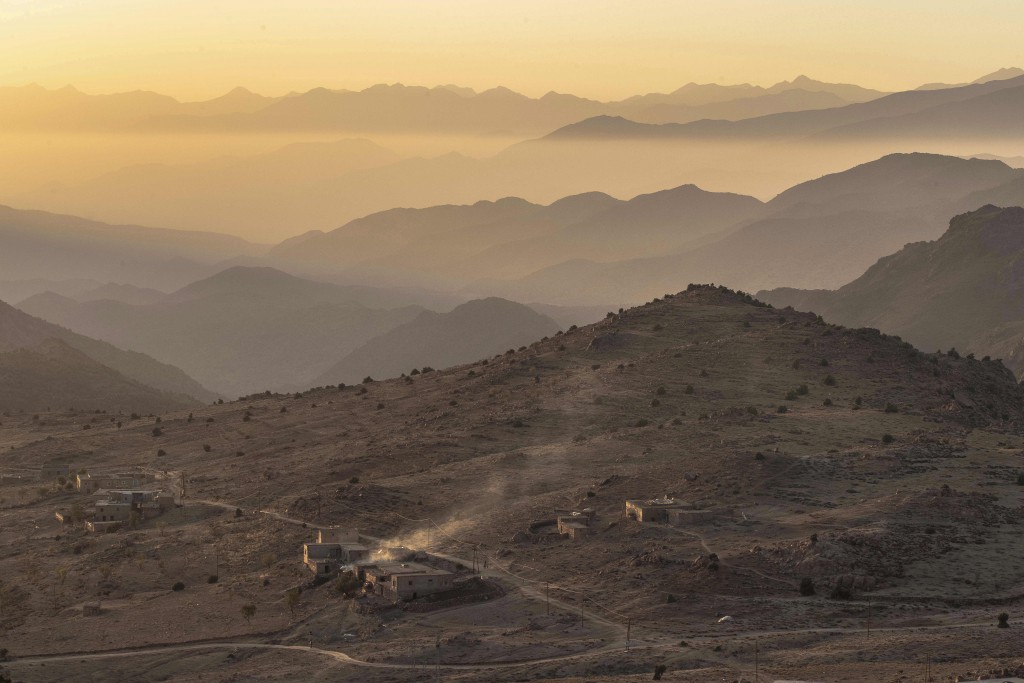 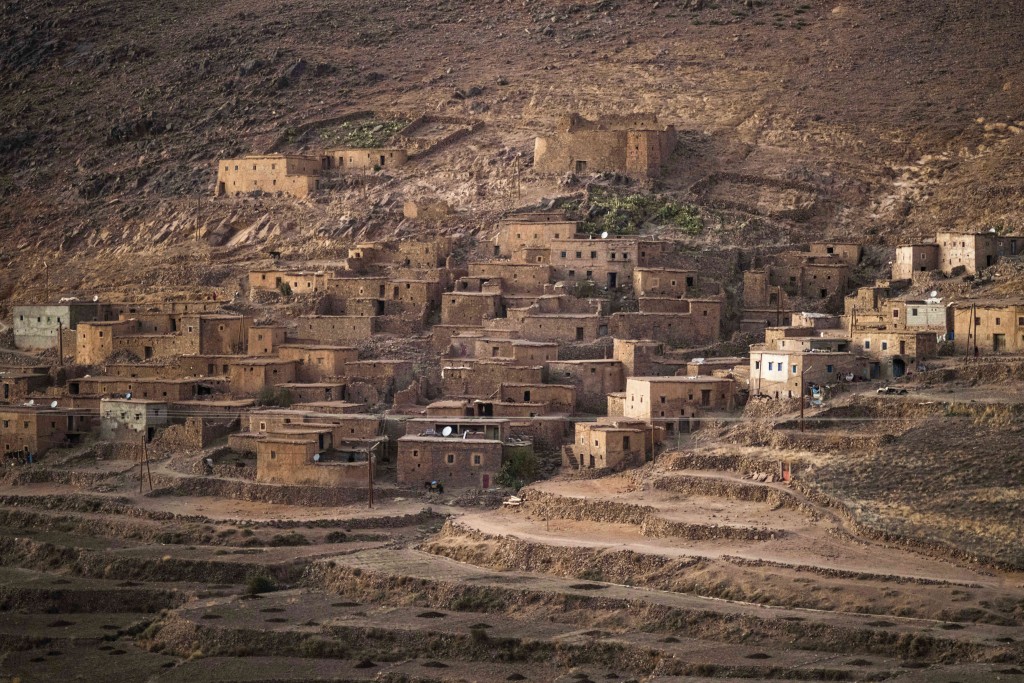 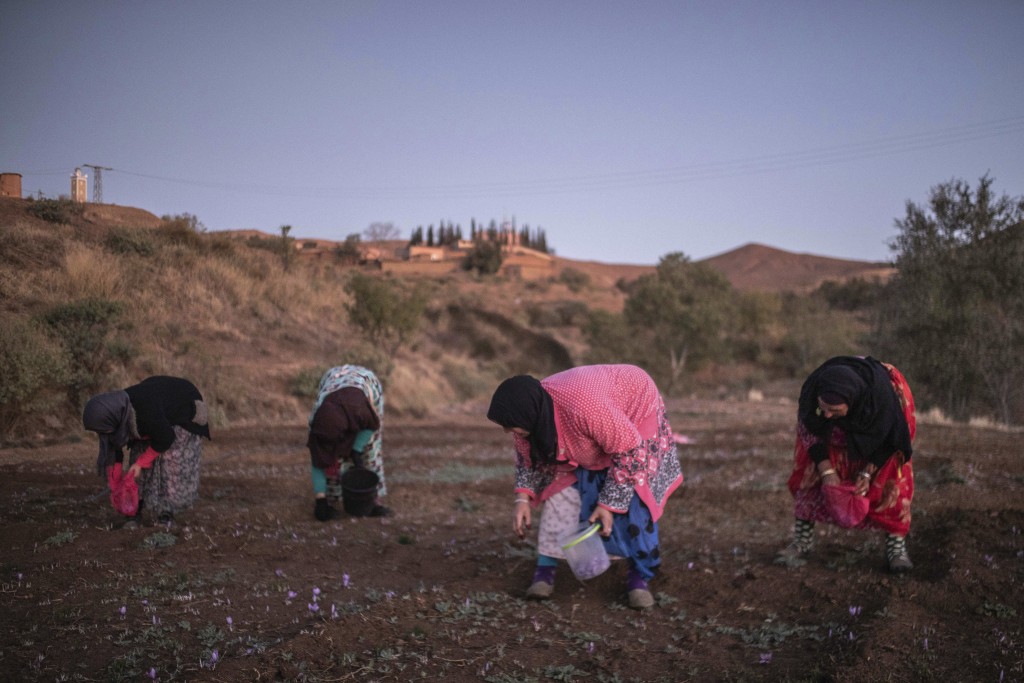 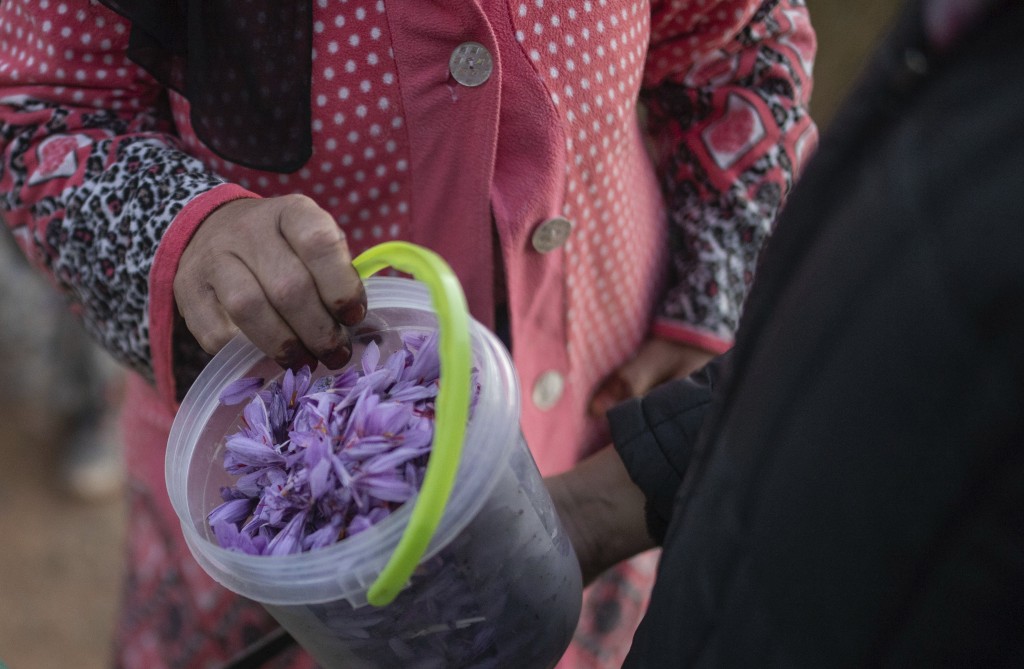 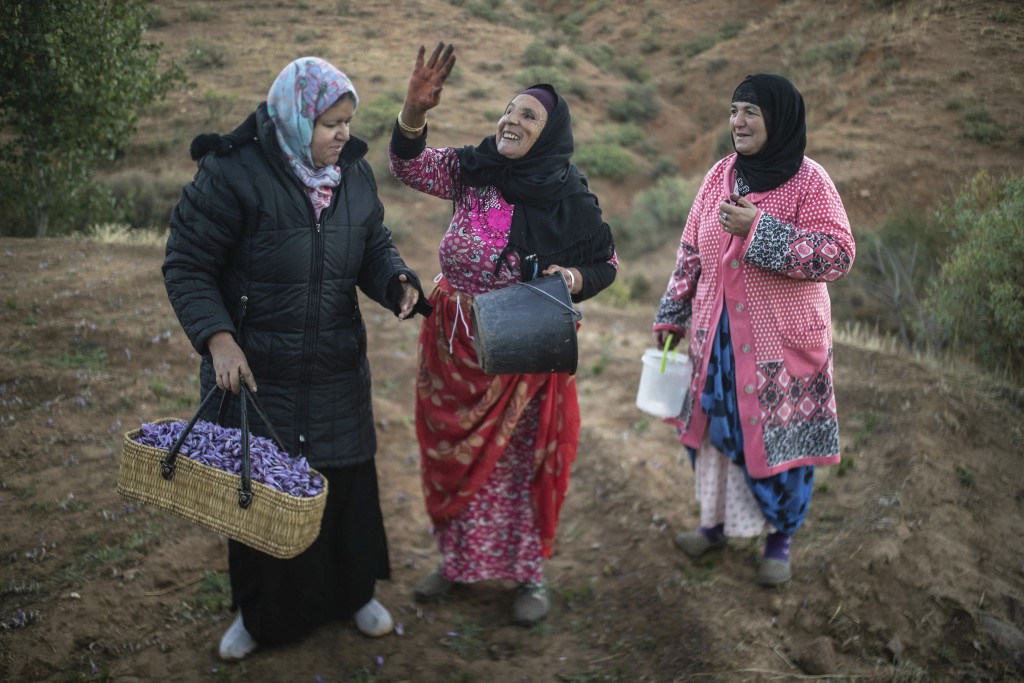 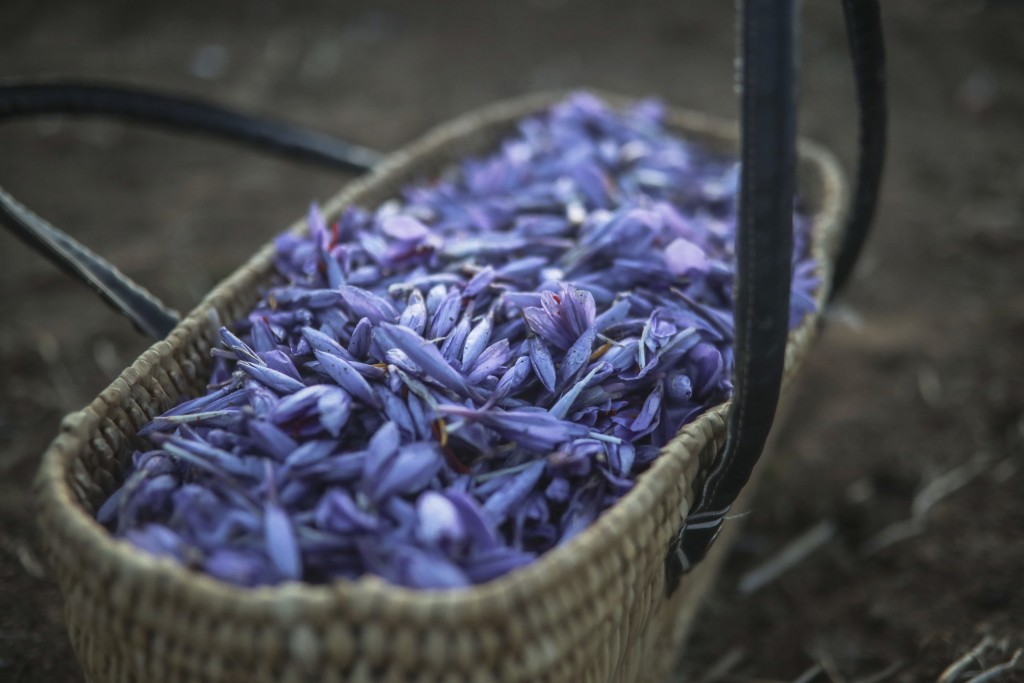 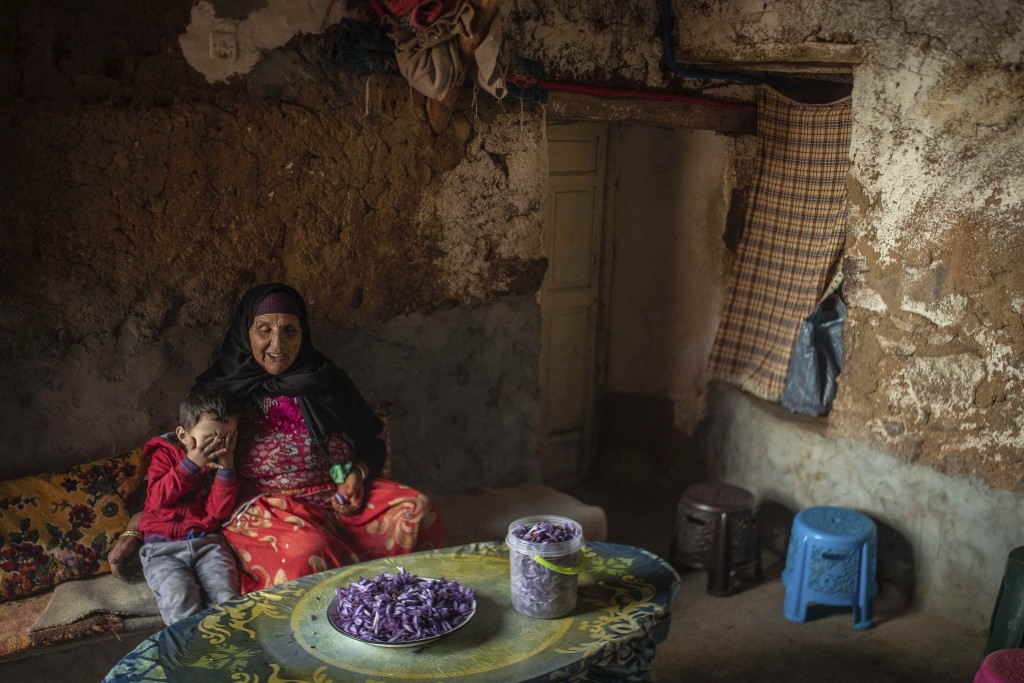 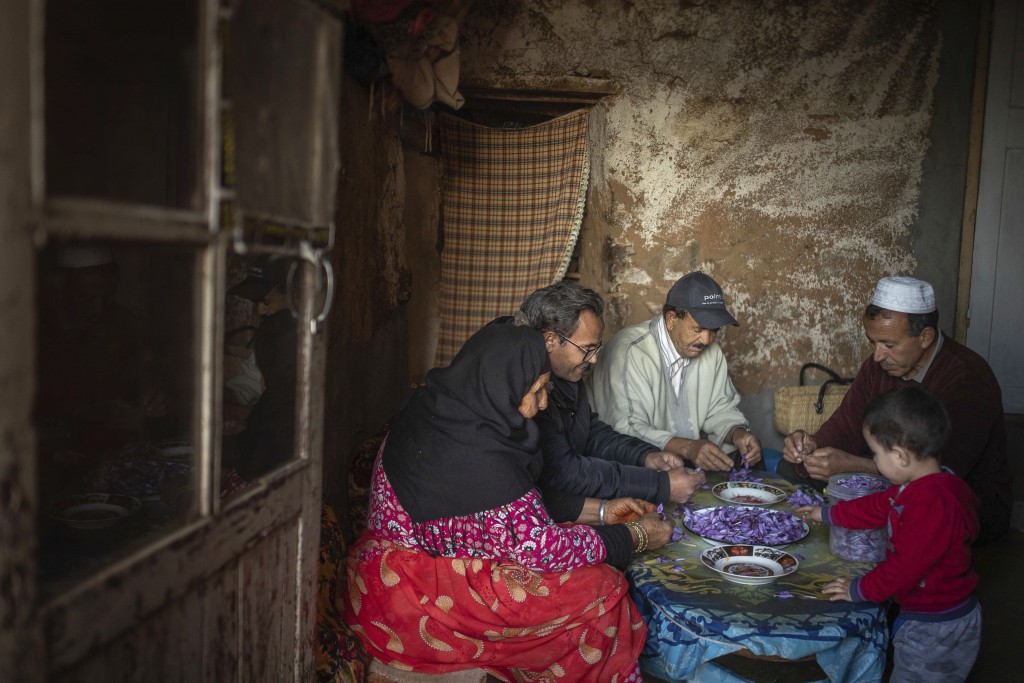 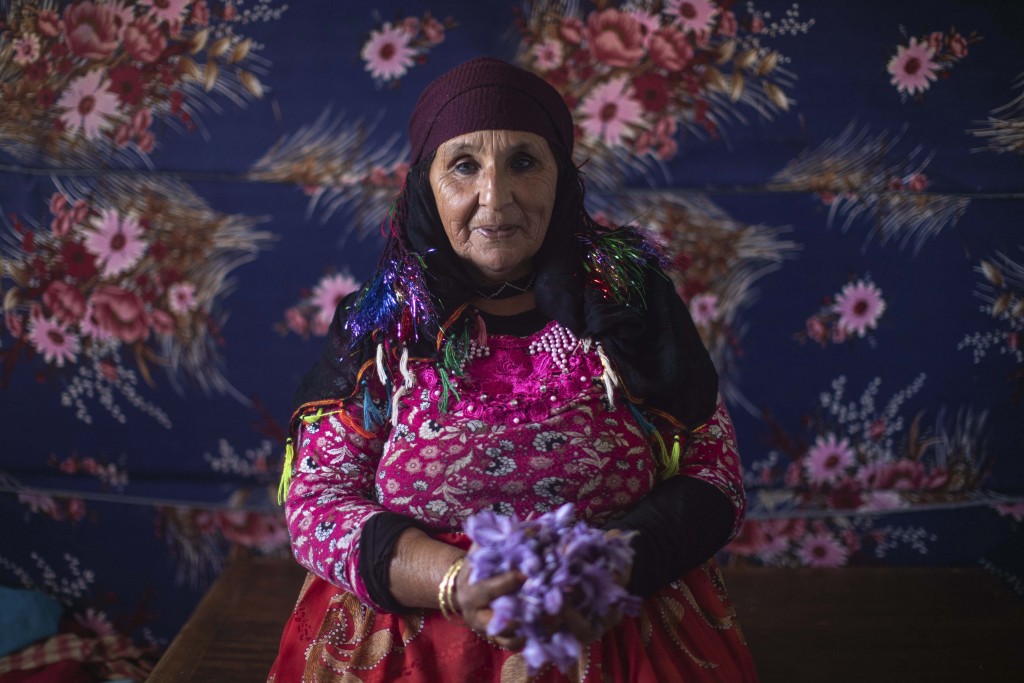 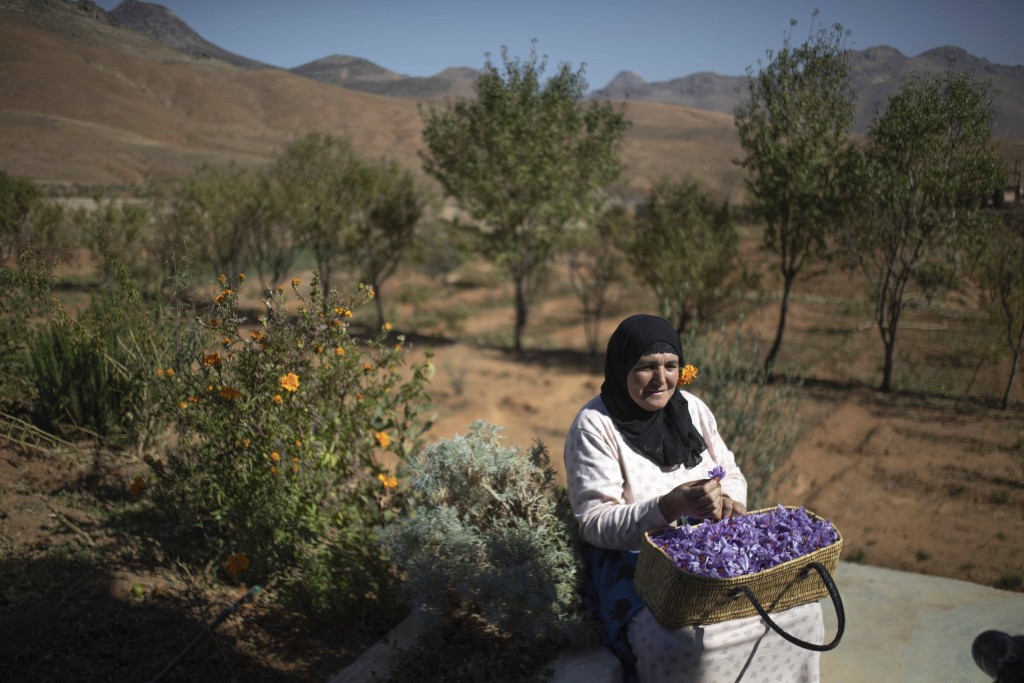 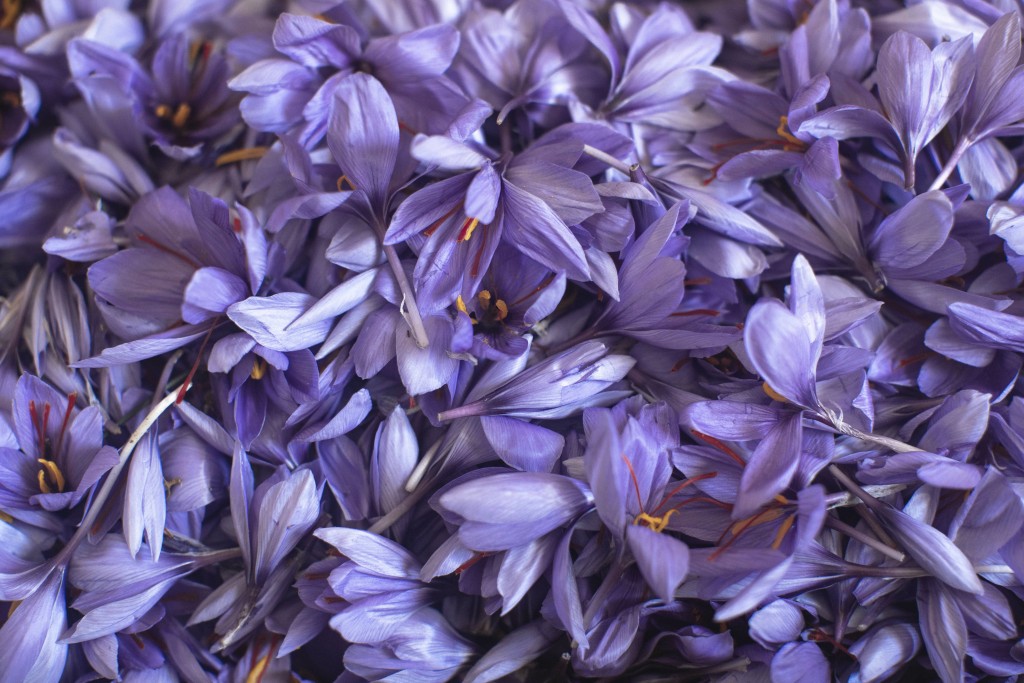 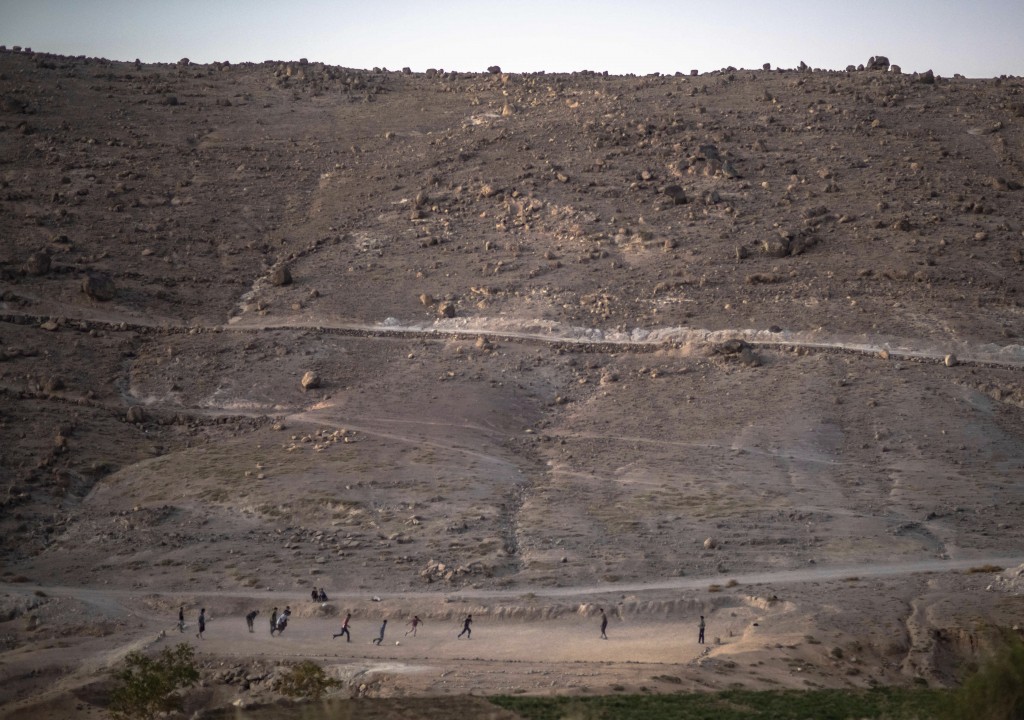 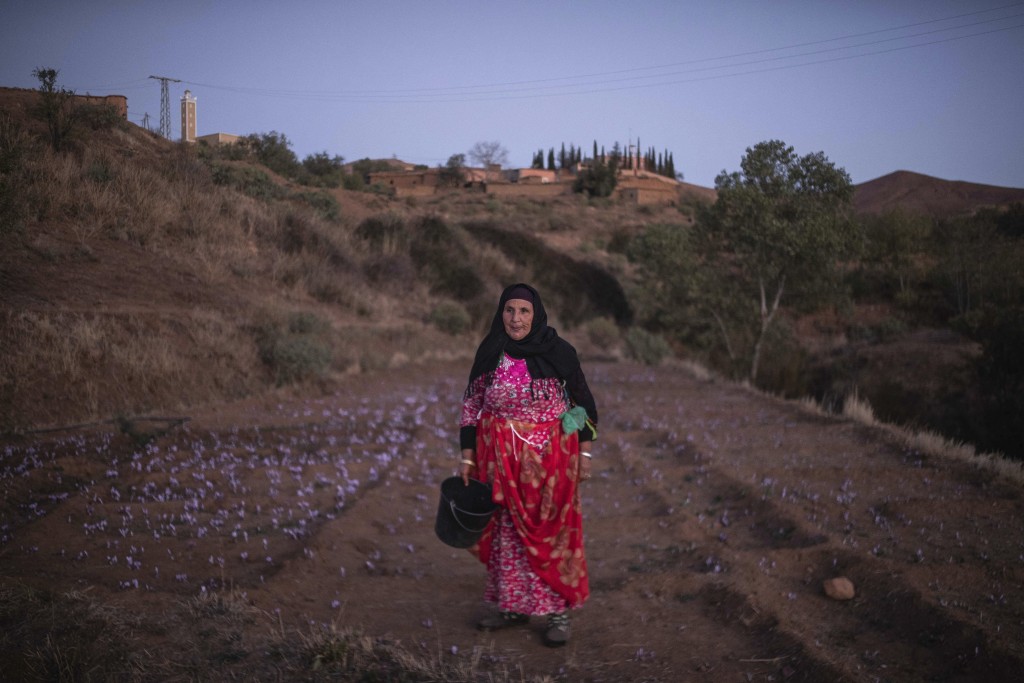 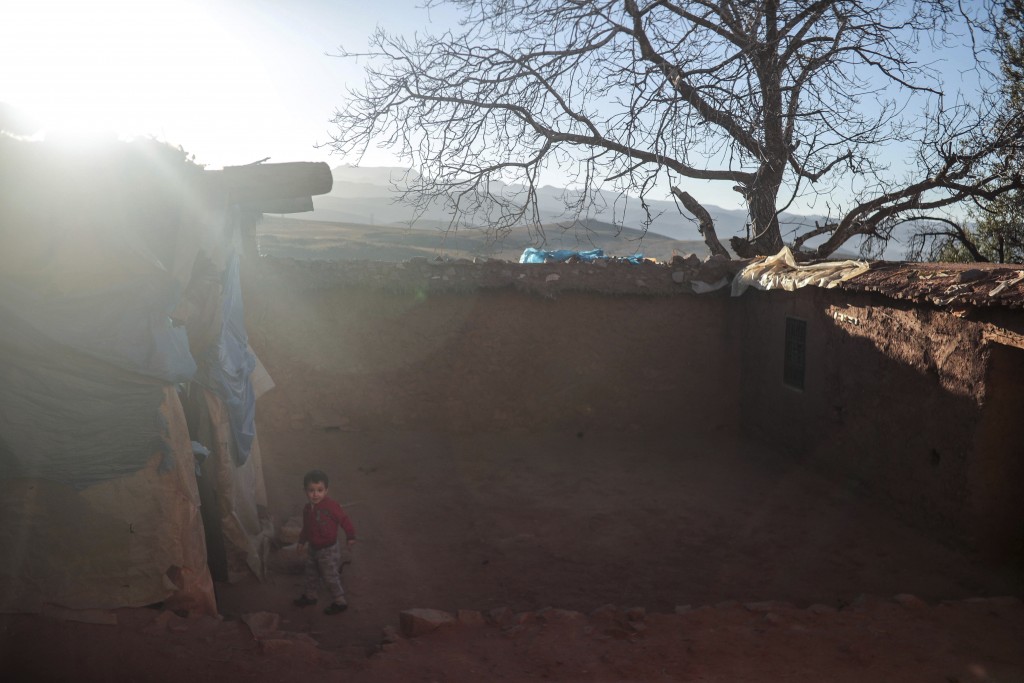 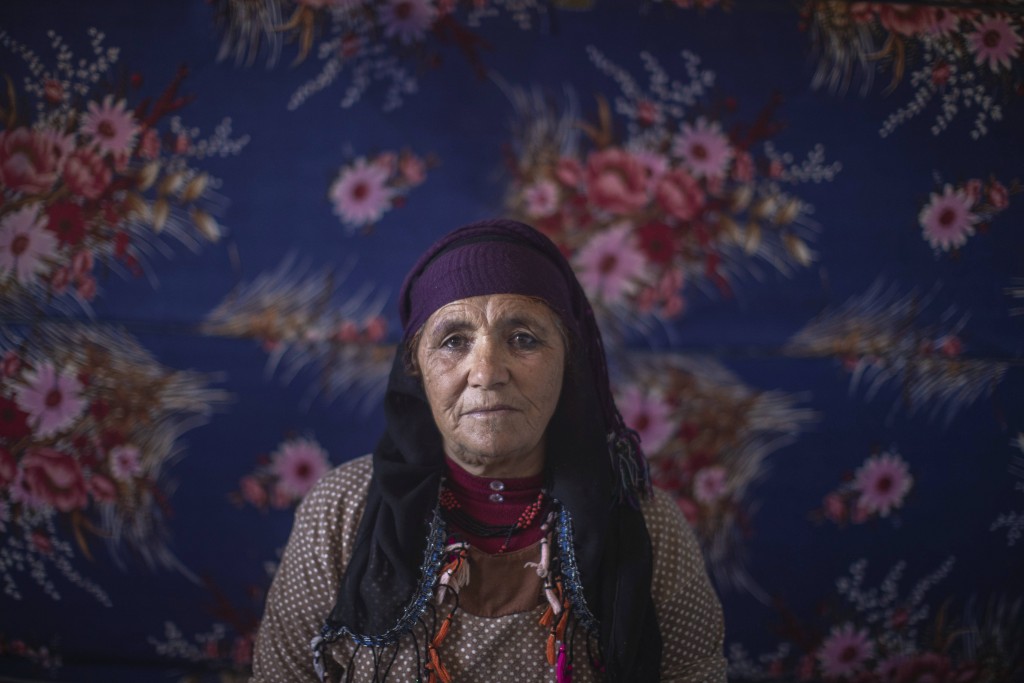 ASKAOUN, Morocco (AP) — A 10-year-old boy calls for the dawn prayer in an isolated village in Morocco's Atlas mountains, announcing a laborious day racing against the clock to harvest fields that produce the most expensive spice on earth: saffron.

It's mainly older women who respond to his call, making their way out of Askaoun village and its mud-brick homes before the sun rises and into fields of purple saffron flowers whose crimson stigmas will become aromatic orange saffron sold around the world.

"Isn't the flower just calling to be picked? Look at it, it gives itself to your hand," says villager Biya Tamir. She doesn't know her age, but estimates that her body is in its sixties and says her spirit is that of a child.

Though the women's bent backs ache and their hands are blistered by the morning cold, they sing and chat as they pick the flower that thrives in only select places on earth. Morocco is among the world's top five saffron producers, with output of 6.8 tons last year according to the Agriculture Ministry, though Iran is by far the largest producer.

The saffron plants bloom for only two weeks a year and the flowers, each containing three crimson stigmas, become useless if they blossom, putting pressure on the women to work quickly and steadily.

Every step is done by hand, and if stigmas aren't picked out and dried within a few hours of harvesting, their quality drops drastically, making saffron one of the most laborious agricultural activities and giving it the nickname "red gold."

Few crops can thrive in the arid soil of the lower Atlas range, so the village depends solely on saffron to survive. The harvesters see only a fraction of the money consumers spend for the spice, however, and the weather can wreak havoc on their livelihood. This year, precipitation was irregular, snow was scarce and the cold period too brief.

"There's at least a 50% drop in the harvest compared to last year. And the farmers are feeling defenseless," says Rachida Baha, president of Tamghart Al Filahya cooperative, which focuses on helping women saffron farmers.

"The women are simply not aware of the real value of saffron," she said. "For years, the women worked for free. Many still do."

The village has no nearby health services, and women all give birth at home.

"If a person gets sick, we give them warm soup and then we take them to the graveyard," says Fatima Ait Tahadoucht, sitting around a table of women extracting stigmas, each wearing distinctive, colorful headscarves.

They start describing painful, bulging leg veins and other health problems, but the sobering discussion is interrupted by singing from an adjacent house.

"The saffron season is hard but it is still a time for us to forget our sorrows," says Khadija Safieddine, 23. "We come together and have a good time and for that alone, we love the saffron."