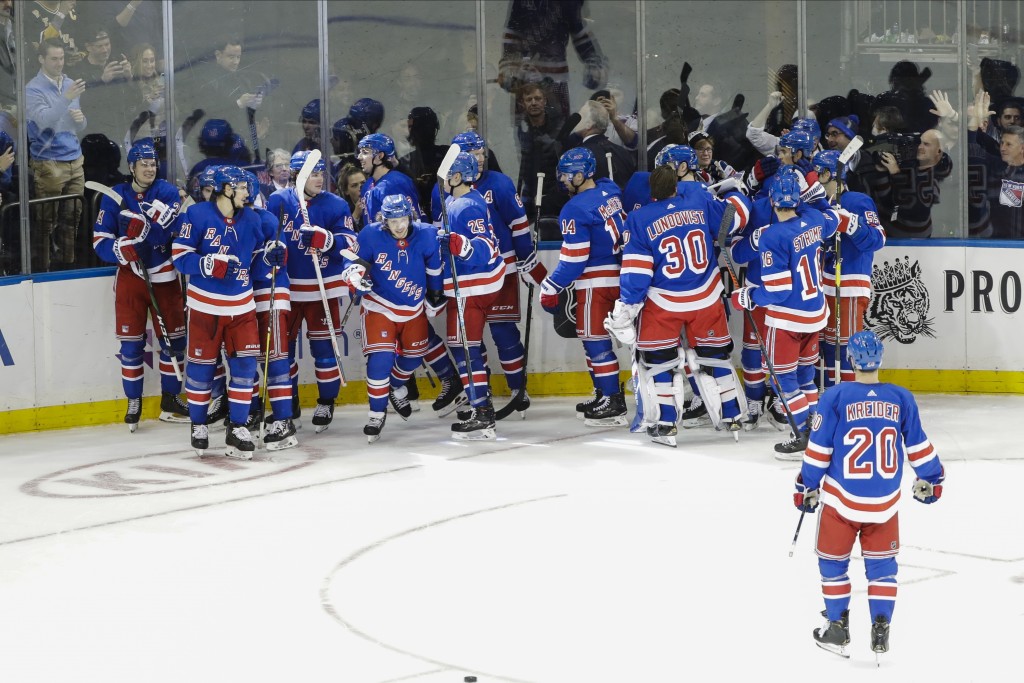 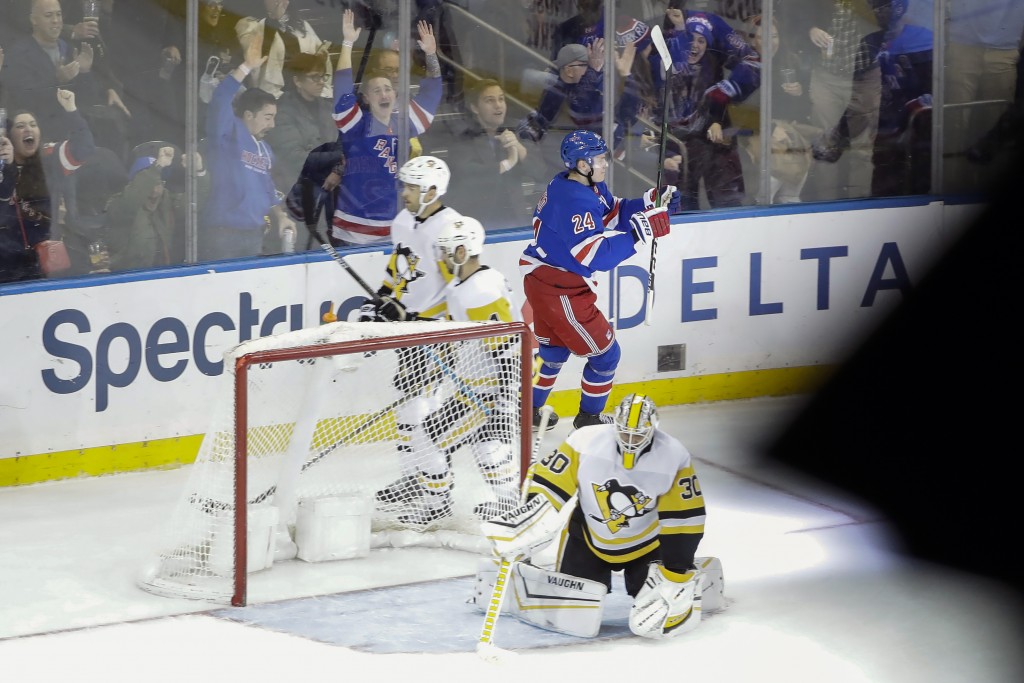 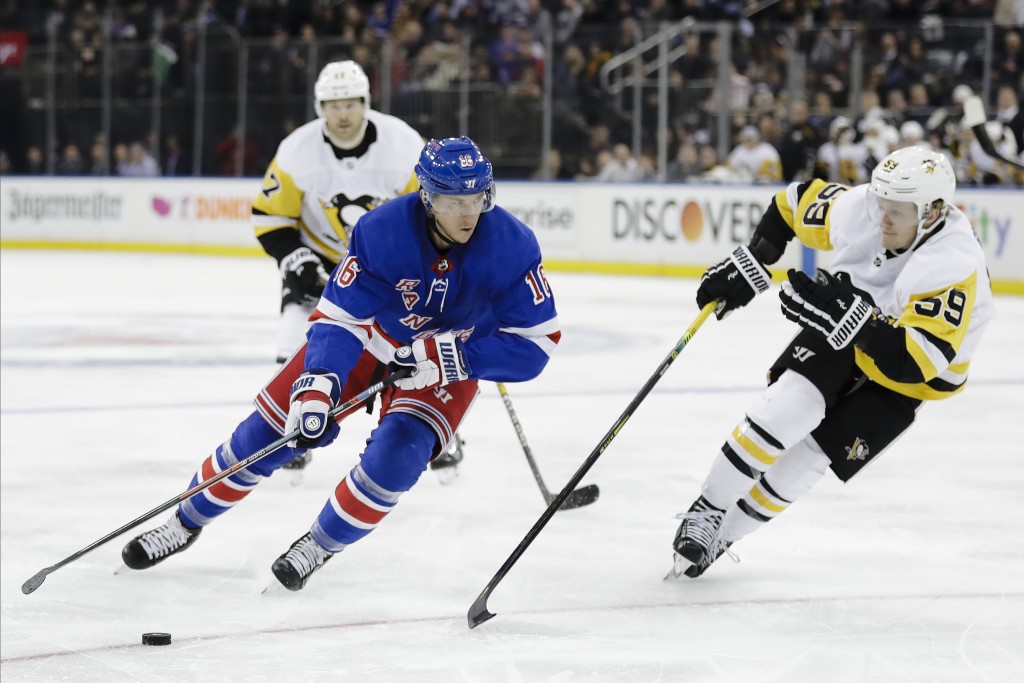 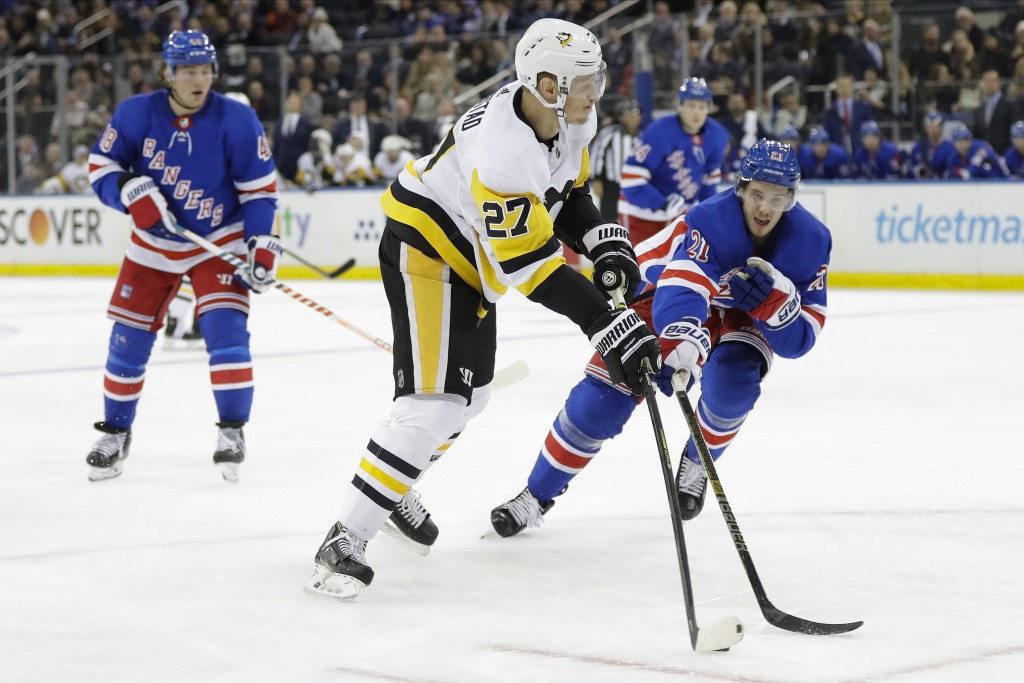 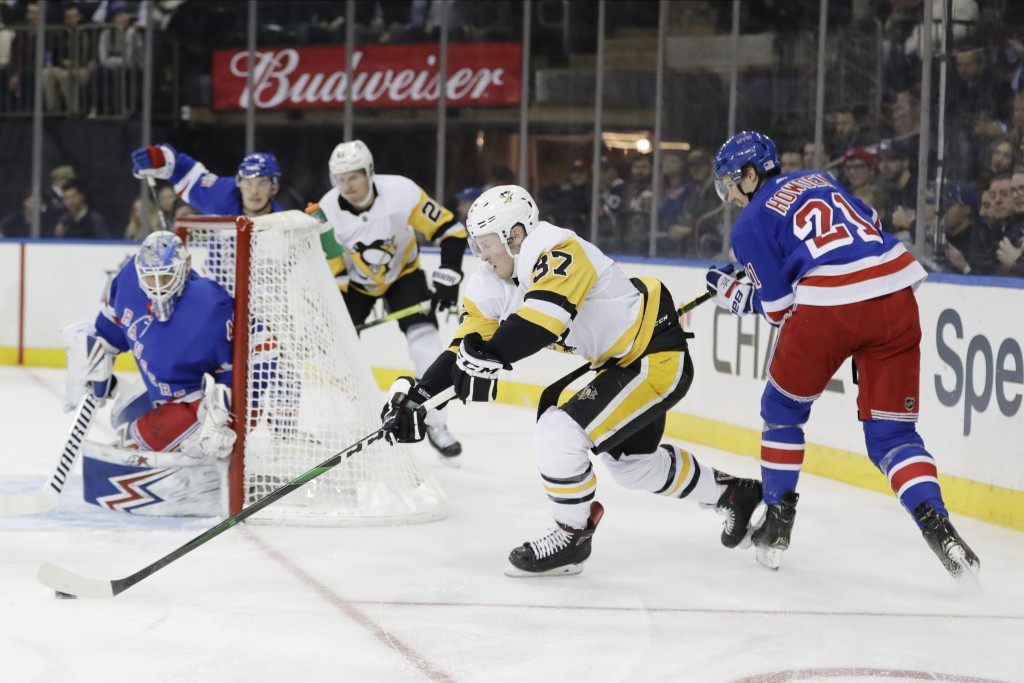 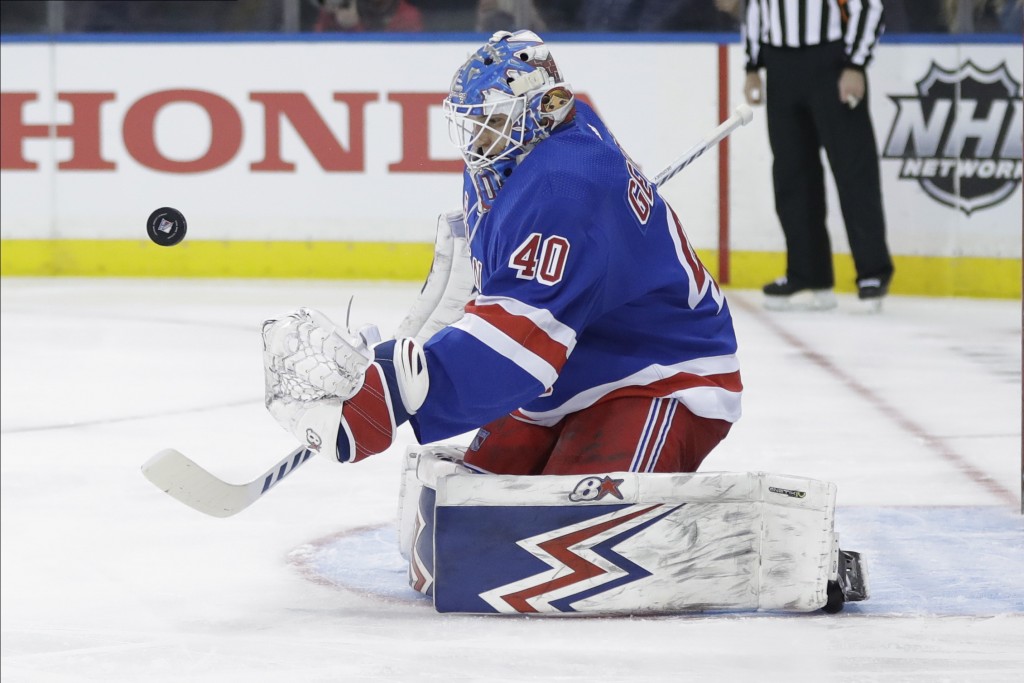 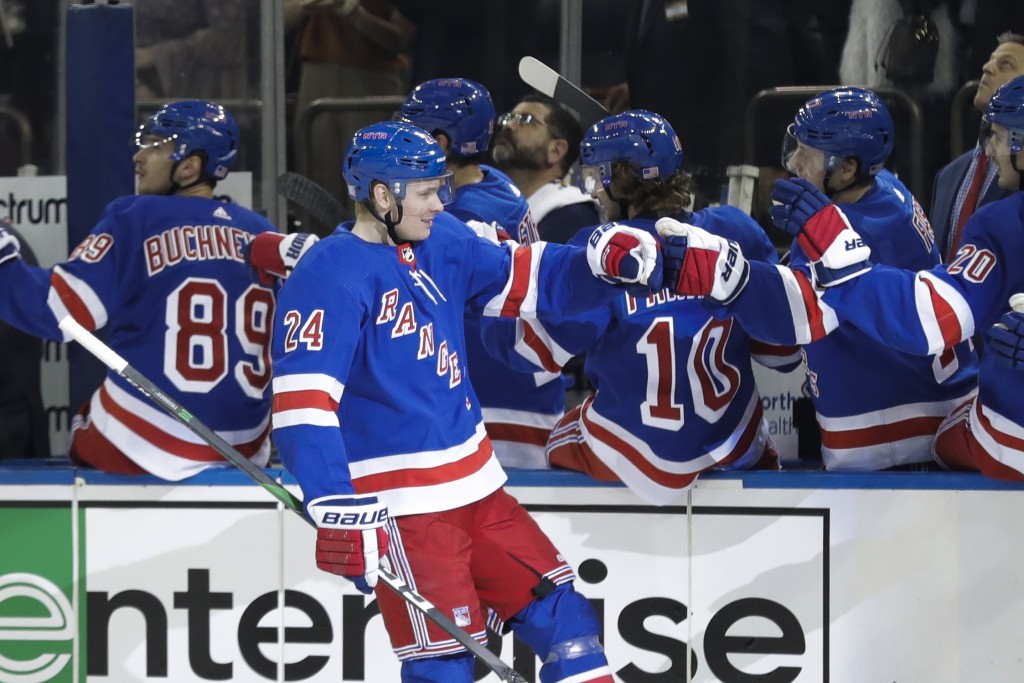 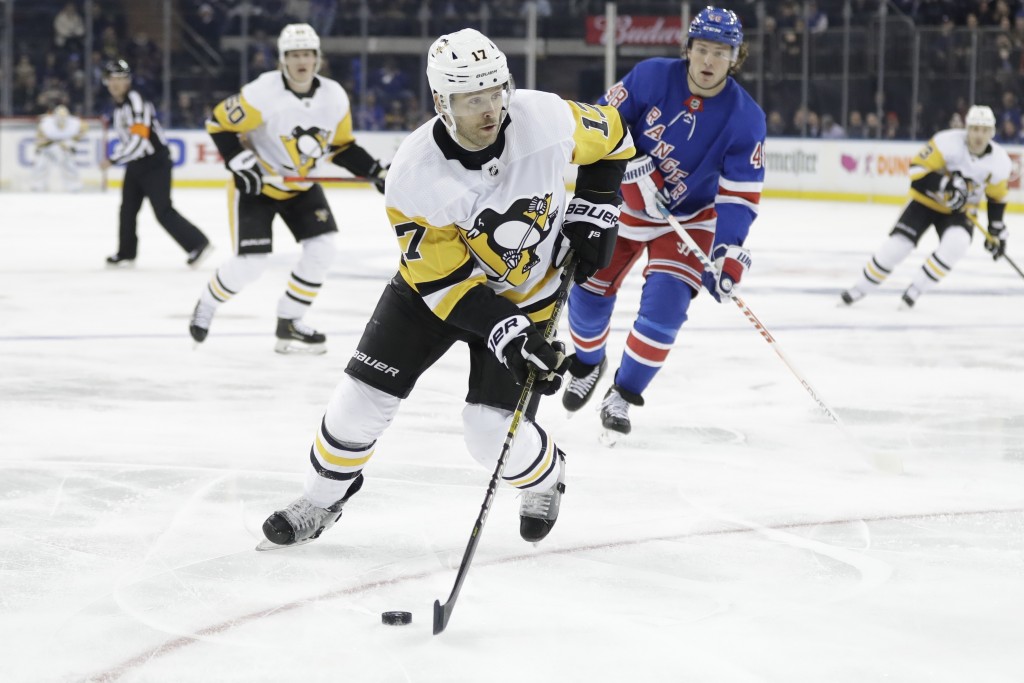 NEW YORK (AP) — Kaapo Kakko scored his second goal of the game 2:36 into overtime to give the New York Rangers a 3-2 victory over the Pittsburgh Penguins on Tuesday night.

Adam Fox had a goal in regulation and set up Kakko's winner as New York recovered after blowing a two-goal lead and improved to 5-1-1 in its last seven games. Alexandar Georgiev, getting the start after Henrik Lundqvist played the previous three games, finished with 30 saves.

In the extra period, Fox brought the puck up the left side, skated toward the middle and sent a pass to the left doorstep, where the Finnish rookie redirected the puck past Penguins goalie Matt Murray for his sixth of the season.

Justin Schultz and Jared McCann scored for the short-handed Penguins, who earned at least a point for the sixth time in seven games (4-1-2). Murray, making his seventh straight start and 15th in 18 games this season, stopped 24 shots.

The Penguins were without star center Sidney Crosby due to a lower body injury. The two-time MVP did not travel with the team to New York after leaving in the third period of a 3-2 shootout win over Chicago on Saturday. Pittsburgh was also missing defenseman Kris Letang for the third straight game with a lower body injury and forward Patric Hornqvist (injured reserve) for the fourth in a row.

With the score tied 2-all, both teams had chances in the third, with Georgiev and Murray making great stops on both ends. The Rangers went on their second power play with 4:10 left after Brian Dumoulin was whistled for tripping Greg McKegg, but managed just one shot on goal as Pittsburgh killed off its 16th straight penalty and 22nd in the last 23.

In the closing seconds, Dumoulin had a shot blocked by Rangers defenseman Jacob Trouba and his follow was stopped by Georgiev to send the game to overtime.

The Penguins got off to another slow start, trailing 2-0 while getting outshot 11-8 in the first period. It marked the 12th time in 17 games Pittsburgh gave up the first goal of the game. And once again, the Penguins got going in the second.

Schultz got Pittsburgh on the scoreboard at 1:13 on the team's second shot of the period as he got a pass from Evgeni Malkin, skated through the left circle and fired it past Georgiev for is second.

The Penguins tied it with 7:27 left in the second as Dominik Simon mishit the puck on a shot off his own skate and then passed to McCann, who fired it past Georgiev for his sixth. It ended Pittsburgh's 11-game drought without a power-play goal, and snapped an 0-for-28 skid with the man advantage.

Pittsburgh, which has been outscored 11-9 in the first period, has 28 goals in the second — just one behind Washington for most in the middle period.

The Rangers took the lead in the first when a streaking Kakko took a pass from Brendan Lemieux, skated in on Murray, went forehand to backhand and put it past the goalie on the right side for his fifth 6:42 into the game.

The Rangers had a 9-1 advantage in shots over the first 7 1/2 minutes, but had only one more shot on goal until Fox got a cross-ice pass from Panarin and beat Murray top shelf from the right circle for his third with 9.3 seconds left in the opening period.

NOTES: Pittsburgh came back from a multiple-goal deficit for the fourth straight game, but is 2-1-1 in that stretch. ... Malkin has points in four straight games (one goal, five assists) since returning from an 11-game absence due to injury. ... McCann extended his point streak to four games, with two goals and four assists in that stretch. ... As part of Veterans Night, the Rangers wore customized jerseys and had camouflage tape on their sticks during warmups. The jerseys and sticks will be auctioned off to benefit the Wounded Warrior Project. ... Fox extended his point streak to five games, with two goals and six assists. ... Rangers C Mika Zibanejad missed his seventh straight game due to a lower body injury. ... Panarin extended his point streak to nine games, tying a career high. He has nine assists and 13 points in that stretch.

Penguins: At New Jersey on Friday night before playing five of the next six at home.

Rangers: At Tampa Bay on Thursday night to open a two-game trip to Florida.