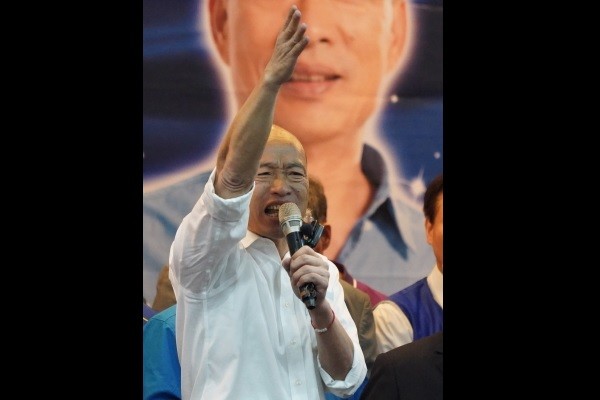 On Sunday, Han returned to Kaohsiung to attend a cadre awards event at his campaign's Kaohsiung headquarters. A reporter asked him after the event if a notice sent by the state-owned CSBC Corporation to union members asking them to bring their families to rallies for President Tsai Ing-wen (蔡英文) was a threat, and Han responded that as the election nears, the Democratic Progressive Party (DPP) will seek ways to discredit its opponents.

He said that there are "five nuclear bombs" waiting for him and that "Big Brother" has opened his eyes and will hurl one after another, reported Storm Media. Han added that the people of Taiwan can expect the nuclear bombs designed to smear him to soon explode, one by one.

Han then asked, "Is it healthy to directly discredit opponents to get votes when there is no way for democratic politics to govern the country? Or is it better to gain votes by governing in a way that allows people to live and work in peace and contentment?"

Han called on the Taiwanese people to open their eyes because "Big Brother" is watching and preparing to act. He said that before "Big Brother" makes his move, there will be "five nuclear bombs ready to blast Han Kuo-yu to death, so everyone is waiting to watch," reported ETtoday. When asked who "Big Brother" is, Han did not respond.