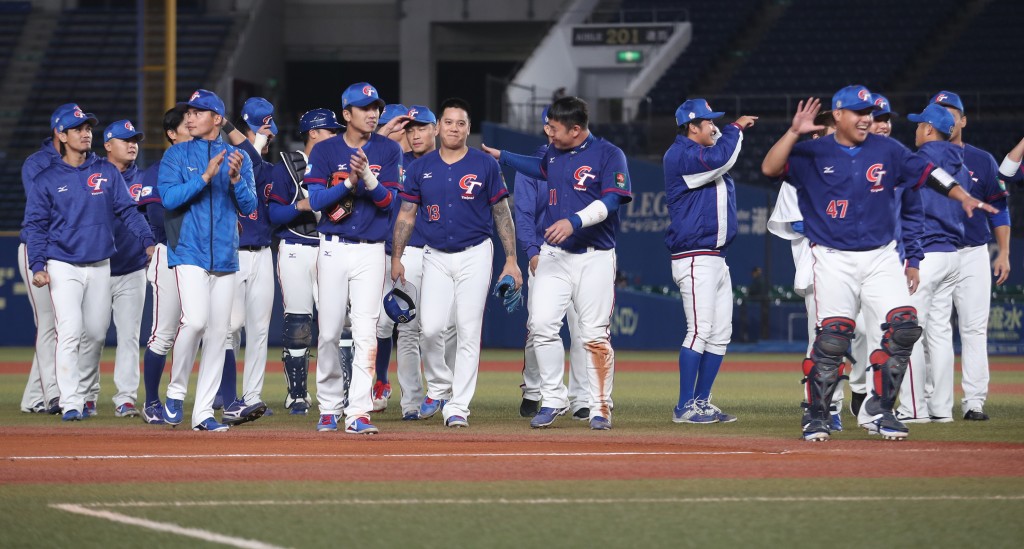 Taiwan's national baseball team crushed defending champion South Korea 7-0 on Tuesday, securing a crucial victory in the Premier12 championship in Japan that keeps alive the nation's hopes of securing an automatic berth at the Tokyo Olympic Games.
Team Taiwan drew first blood in the top of the second inning with two consecutive RBI-hits by Kao Yung-chieh (高宇杰) and Hu Chin-lung (胡金龍) off Korean starter Kim Kwang-hyun, bringing the score to 2-nothing.
The lead was extended to 3-0 in the fourth inning with a RBI single by Wang Sheng-wei (王勝偉), bringing back runner Lin Li (林立), who reached first base with a single.
In the top of the seventh inning, Chen Chun-hsiu (陳俊秀) blasted a three-run homerun off Korean reliever Won Jong-hyeon, before Lin Hung-yu (林泓育) added another RBI single in the ninth to give Taiwan a comfortable 7-0 lead, which it held until the end of the game.
Taiwan's starting pitcher Chang Yi (張奕) cruised through the game with another stellar 6.2 scoreless innings in 112 pitches, before being replaced in the seventh inning.
Relievers Chen Kuan-yu (陳冠宇) and Chen Hung-wen (陳鴻文) closed the door to seal the team's first victory in the Super Round.
The victory gives Taiwan, competing under the name Chinese Taipei, a 1-2 record in the six-team Super Round.
South Korea, winner of the inaugural Premier12 in 2015, has a 2-1 record.
Taiwan faces the United States Friday and Australia on Saturday.
Taiwan needs to finish above South Korea and Australia in the Super Round to secure a berth in the 2020 Summer Olympics.
However, even if the team fails to claim a spot in the Olympics through the Premier12 tournament, it has one last chance to do so at the Olympic Final Qualifying Tournament, which will take place in March or April 2020.
Sanctioned by the World Baseball Softball Confederation (WBSC), the 2019 edition of the Premier12 features the top 12 teams in the WBSC's 2018 year-end world rankings.
Baseball is returning to next year's Summer Olympics for the first time since 2008, and this year's Premier12 serves as a qualifying event for the Olympics.