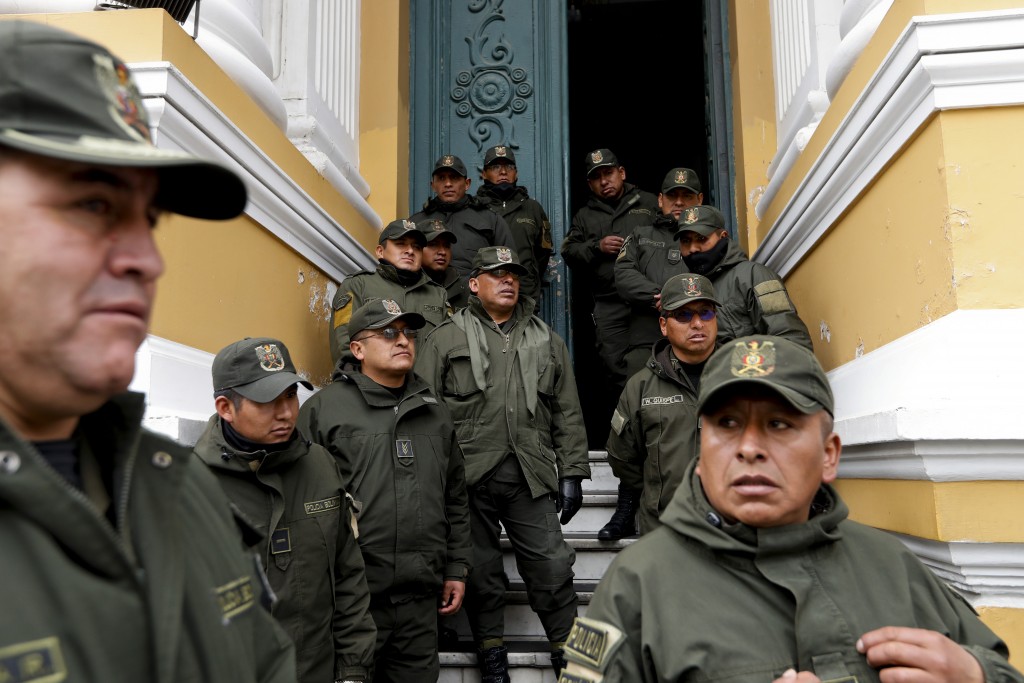 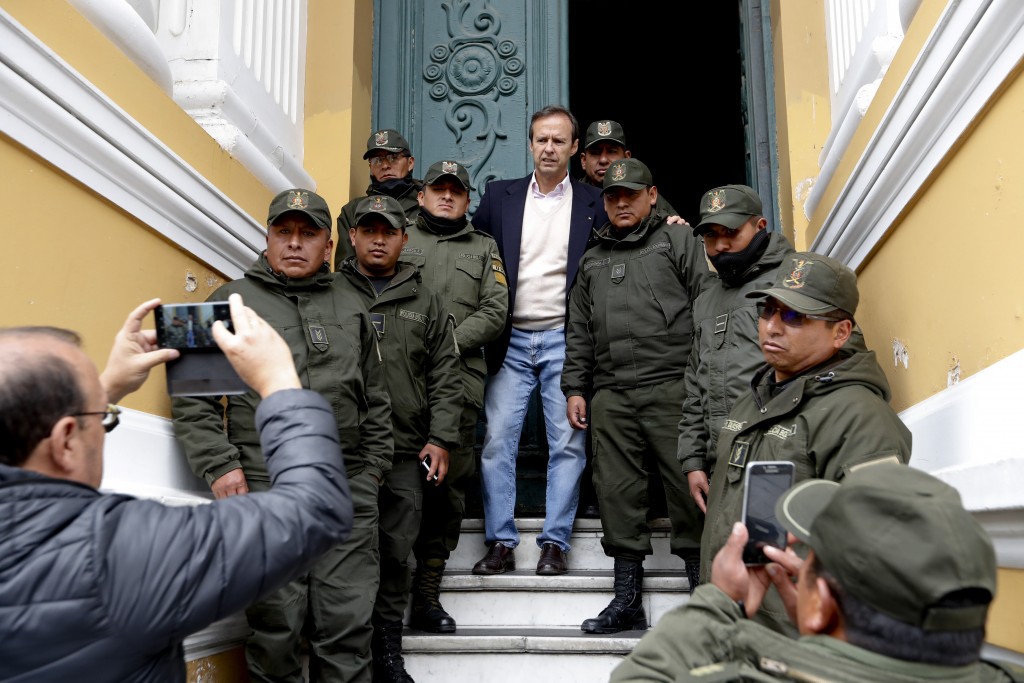 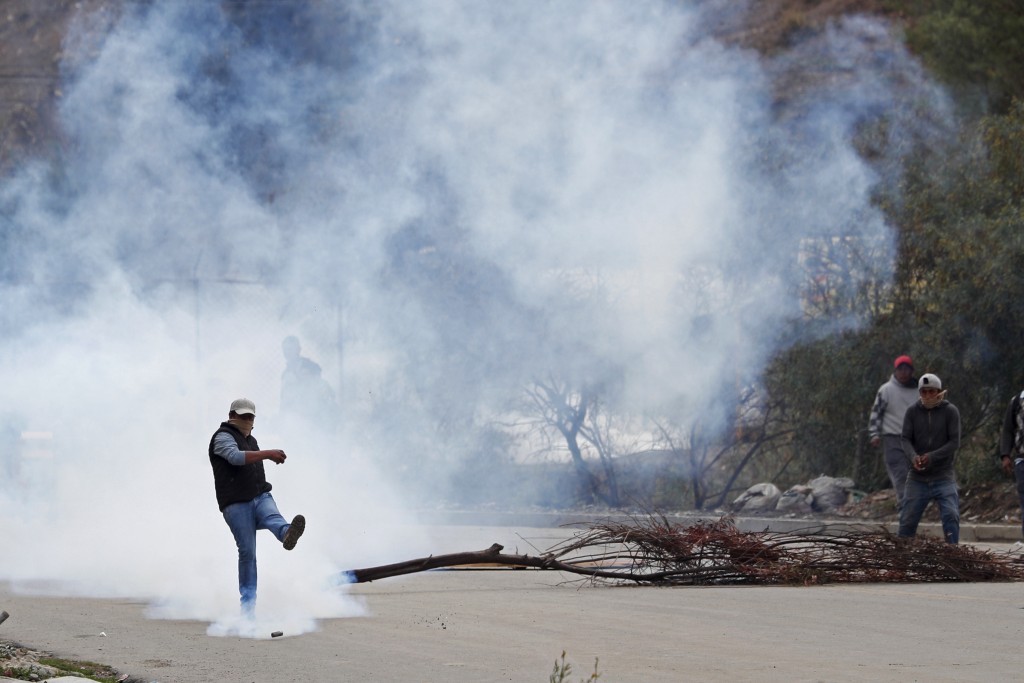 BOGOTA, Colombia (AP) — Did Bolivia experience a coup or the culmination of a popular movement demanding a president's resignation?

Bolivians and countries around the world are weighing that question after Evo Morales stepped down from power following weeks of upheaval.

The nation's first indigenous leader contends he was forced out of power by a coup instigated by the opposition, while detractors claim his alleged abuse of power triggered a legitimate uprising in the streets.

The South American nation has been embroiled in protests since Morales claimed that he won the Oct. 20 presidential election outright.

Bolivia's leader for nearly 14 years needed a 10 percentage-point margin over his closest rival to avoid a December runoff in which he faced a high probability of losing to a united opposition in his quest for a fourth consecutive term.

Election officials abruptly stopped releasing results from a quick count that showed Morales leading the race but not by enough to win in the first round. The development led to accusations of fraud and sparked deadly protests.

Many in Bolivia were already skeptical that the vote would be fair, contending the nation's electoral authority is biased toward Morales.

The president had also chosen to run for a new term despite a 2016 referendum in which voters shot down a proposal to change constitutional term limits and let him run again. A top court that critics claimed was stacked in Morales' favor threw out the restrictions, paving the way for him to run again.

WHY DID MORALES STEP DOWN?

The leader's troubles escalated Friday evening when police forces across Bolivia decided to join the protests and break with Morales.

The following day, the Organization of American States announced that its preliminary audit of the Oct. 20 had found serious irregularities.

Morales agreed to hold a new vote, but that wasn't enough to quell protests or satiate an opposition convinced it would not be possible to hold a fair election as long as he remained in the presidential palace.

Labor groups, including some that had marched in favor of Morales, began turning against him and calling on the leader to resign.

On Sunday, the head of Bolivia's armed forces, Gen. Williams Kaliman, issued a statement declaring that in light of the ongoing social upheaval, military officials were "suggesting" to Morales that he resign.

Shortly thereafter Morales announced he was calling it quits, likening his departure to an overthrow by an opposition threatening both him and his followers.

WAS IT A COUP?

A coup d'état is commonly defined as a forceful change in government through the use or threat of violence by a member of the state, often the armed forces.

Whether the events Sunday in Bolivia constitute a coup d'état is now the subject of debate in and outside the nation.

On one hand, there was a clear involvement of the military in civilian affairs, notes John Polga-Hecimovich, a political scientist at the U.S. Naval Academy.

However, unlike Cold War-era coups in which military troops marched on capital cities and took control of government buildings, Bolivia's armed forces only issued a statement with a "suggestion" of what Morales should do.

Thus, Bolivia's "coup" is largely a question of semantics.

"The military didn't use violence," Polga-Hecimovich said. "It issued a verbal declaration and did not give the president an ultimatum. I think that's the crux of the matter. Whether you want to view that as a threat or not. If you view it as a threat, it's a coup. If you don't view it as a threat but as a suggestion, then you don't."

Michael Shifter, president of the Inter-American Dialogue, highlighted that there is also no indication right now that the military plans to rule.

Nonetheless, he added: "I don't' think we can be happy about what seems to have been a role of the military in causing Morales to step down."

WHO IS ON EACH SIDE OF THE COUP DEBATE?

Morales allies who share his socialist ideology have backed his claim that he was removed in a coup d'état.

"It is unfortunate that Latin America has an economic elite that does not know how to coexist in democracy and with social inclusion of the poorest," he wrote on Twitter.

"The word coup is used a lot when the left loses," he told Brazil's O Globo newspaper. "When they win, it's legitimate. When they lose, it's a coup."

Others are avoiding a direct stance and calling for new elections.

The head of the Organization of American States said the international body "rejects any unconstitutional resolution of the situation" while calling on Bolivia's legislature to name new election authorities to ensure a fair vote.

The European Union reiterated a call for calm and said it stands ready to send election observers if a request is made.

DOES IT MATTER WHAT IT'S CALLED?

As long as there is uncertainty about whether Morales was overthrown in a coup, any incoming government could face legitimacy challenges.

The armed forces could also now be perceived of having become politicized, Polga-Hecimovich said.

All this could mean that an already polarized Bolivia grows more divided.

"If they can't agree on the facts, it's going to be very difficult to agree on a common consensus and a common governance plan," the analyst said.

WHAT WILL HAPPEN NEXT?

All eyes will be on who steps in to fill Bolivia's present power vacuum.

Those immediately next in line to assume the presidency have resigned.

Jeanine Áñez, the Senate's second vice president, said Monday that she would be willing to assume the presidency on an interim basis pending new elections.

"I just want to help provide a solution for this terrible crisis we are living," she said in tears. "Let it be clear this would only be for a transition."

It remains to be seen whether legislators belonging to Morales' party — who still hold a majority — might try to block her.

Whoever steps in will face an uphill battle in establishing a new electoral office, organizing a vote and trying to quell tensions.

Morales has vowed not to back down, saying rival opposition leaders will be remembered by history as "racists and coup plotters."

On Twitter, he said he's been moved by an outpouring of solidarity from supporters.