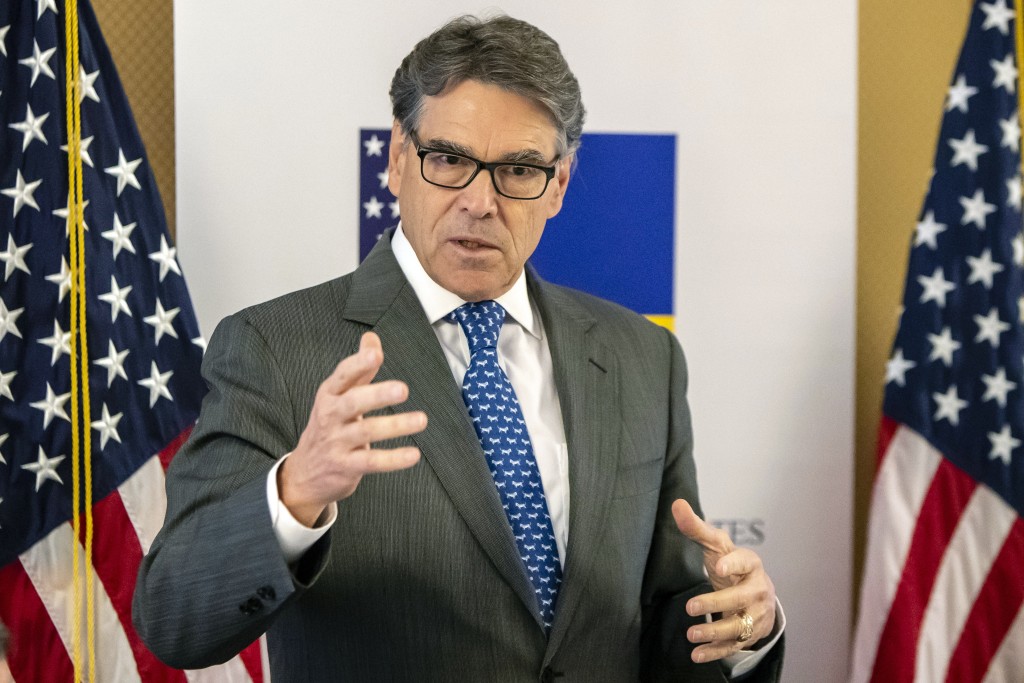 KYIV, Ukraine (AP) — Two political supporters of U.S. Energy Secretary Rick Perry secured a potentially lucrative oil and gas exploration deal from the Ukrainian government soon after Perry proposed one of the men as an adviser to the country's new president.?

Perry's efforts to influence Ukraine's energy policy came earlier this year, just as President Volodymyr Zelenskiy's new government was seeking military aid from the United States to defend against Russian aggression, and allies of President Donald Trump were ramping up efforts to get the Ukrainians to investigate his Democratic rival Joe Biden.

Ukraine awarded the contract to Perry's supporters little more than a month after the U.S. energy secretary attended Zelenskiy's May inauguration. During that trip, Perry handed the new president a list of people he recommended as energy advisers, including his longtime political backer Michael Bleyzer.

A week later, Bleyzer and his partner Alex Cranberg submitted a bid to drill for oil and gas at a sprawling government-controlled site called?Varvynska. Their proposal was millions of dollars lower than their only competitor, according to internal Ukrainian government documents obtained by The Associated Press.

But their newly created joint venture, Ukrainian Energy, was awarded the 50-year agreement because a government-appointed commission determined they had greater technical expertise and stronger financial backing, the documents show.

Testimony in the impeachment inquiry into Trump shows the energy secretary was one of three key U.S. officials who were negotiating a meeting between Trump and the Ukrainian leader.

The sequence of events suggests that the Trump administration's political maneuvering in Ukraine was entwined with the big business of the energy trade.

Perry made clear during trips to Kyiv that he was close to?Bleyzer,?a Ukrainian-American investor and longtime Perry supporter who lives in Houston, and Cranberg, a Republican mega-donor who provided?Perry?the use of a luxury corporate jet during the energy secretary's failed 2012 presidential bid.

Perry spokeswoman Shaylyn Hynes said Wednesday that the energy secretary has championed the American energy industry all over the world, including Ukraine. But Hynes denied Perry had advocated for the business interests of any one individual or company.

Zelenskiy's office did not respond to requests for comment.

In a statement to AP, Bleyzer denied that Perry helped his firm get the gas deal.

"I believe that Secretary Perry's conversations with Ukrainian government officials, if they in fact took place, did not play any role in Ukrainian Energy winning its bid," Bleyzer said Tuesday.

Amy Flakne, a lawyer for Cranberg's company Aspect Holdings, said the company "neither sought, nor to our knowledge received, special intervention on its behalf."

As Trump's energy secretary,?Perry has?flown around the globe to evangelize for U.S. exports of liquefied natural gas, which he calls "Freedom Gas."?He's made multiple trips?to?Ukraine and other former Soviet-bloc nations, where shipments of American gas and drilling technology take on strategic importance as a potential alternative to continued dependence on imports from Russia.?

Of the nine gas blocks awarded on July 1, Bleyzer and Cranberg's bid was the only one of the winners that didn't include the participation of a Ukrainian company.

Perry, who served 14 years as the governor of Texas, has publicly championed the potential of U.S. hydraulic fracturing technology to boost oil and gas production in Ukraine?and pressed for the bidding process to be?opened up?to U.S. companies.?

Visitor logs released by the Energy Department through a public records request show Bleyzer entering through the VIP check-in desk at the building where Perry's office is at least three times, most recently on May 8.

Less than two weeks later, Perry was on a plane to Kyiv to attend the inauguration ceremony for Zelenskiy. It was during that trip that Perry?presented his list of recommended advisers?that?included?Bleyzer?and remarked on their long friendship, according to a person in the room who spoke on condition of anonymity for fear of retaliation.

Perry's work in Ukraine places him at the center of the?House?impeachment inquiry into?efforts by Trump and his personal lawyer Rudy Giuliani to press?Zelenskiy?to open an investigation into Biden and his son Hunter's business dealings with?Burisma, another Ukrainian gas company.

Perry, who announced last month he is resigning by the end of the year, has refused to cooperate with the congressional probe.

Bleyzer?and Perry's ties go back at least a decade. As governor,?Perry?appointed?Bleyzer?in 2009 to serve as?a member of a Texas state advisory board overseeing state funding to emerging technology ventures. The following year,?Bleyzer?contributed $30,000 to Perry's 2010 campaign for Texas governor.

A former engineer at Exxon, Bleyzer was born in Ukraine's?Kharkiv?region and trained in digital electronics and quantum physics. In 1994, he founded?SigmaBleyzer?Investment group, a private equity firm that manages about $1 billion in assets.

A graduate of the University of Texas in Austin, Cranberg?was appointed?by Perry in 2011 to serve a six-year term on the state university system's board of regents. He?is a generous political donor, giving more than $3 million since the mid-1980s primarily to Republican candidates.

When Perry campaigned for president in 2011, federal disclosures show his campaign paid more than $16,000 to?a holding company for a private jet used by Cranberg.