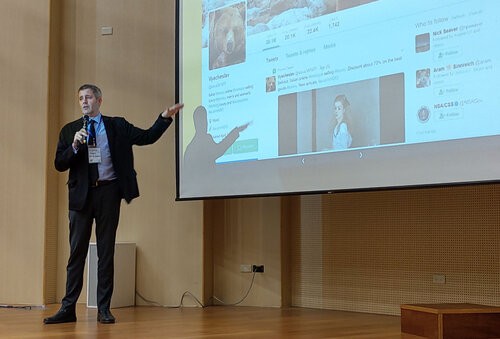 More countries around the world have been copying the efforts of Russia and China to systematically disseminate fake news, a phenomenon that is now considered a cause for global concern, a visiting professor from the University of Oxford said in Taipei Sunday.

"Now, there are two world superpowers in disinformation -- Russia and China," said Philip Howard, Director of Oxford Internet Institute, at a forum at National Taiwan University (NTU). "And then there are other regions that are learning to copy this to develop their own agencies, with their own government budgets, to do similar kinds of work in their own spheres of influence, on the issues that they care about."

Some countries even send teams to a country that was good at disinformation, to learn how to do it more effectively, Howard said at the forum, titled "Fake News Directing Information Warfare? Focus on Social Media from Global Vision."

In his keynote speech, Howard said that since 2017, the number of countries that use computational propaganda to manipulate public opinion has more than doubled to about 70, while political parties in at least 45 democracies have been found to be manipulating information to garner voter support.

India, Iran, Pakistan, Saudi Arabia and Venezuela are some of the other countries where cyber troop activities have been noticed, Howard said, citing a report titled "The Global Disinformation Order," which he co-authored and published in September.

"In the last few months, China has arrived as a superpower in disinformation," Howard said. "We know from our study that the Chinese government attacked the Taiwanese president a few years ago on social media."

Previously, China's disinformation campaign was concentrated on issues it considered of national importance, but recently it has been expanding its interest to manipulating public opinion overseas, he said, citing Hong Kong as an example.

He said most disinformation campaigns become concentrated during election periods, especially in the 48 hours before voting begins, and social media platforms should be more vigilant and responsible.

"One of the most popular causes (of disinformation) is that Facebook and Twitter serve up junk news in the days before people vote," Howard said. "So they have the responsibility, especially at that sensitive moment, to help manage the content."

He also urged professional journalists, and citizens, to do their part to help prevent the spread of disinformation. Governments, however, should not be heavy-handed in trying to censor social media, Howard said.

However, because the Chinese government does not really understand the nature of the Taiwanese people, its disinformation campaigns usually backfire, Chen said.

Taiwan, nonetheless, needs to be on guard against its own people who collaborate with the Chinese propagandists, because such collaborators would know their compatriots well, he said.

The forum was organized jointly by Taiwan's Ministry of Science and Technology, National Taiwan University and National Chiao Tung University.