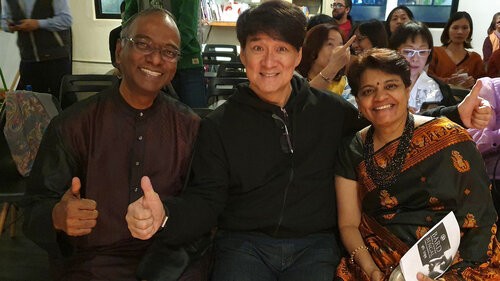 India's top envoy to Taiwan, Sridharan Madhusudhanan, has been listening to Hong Kong singer Wakin Chau's (周華健) songs for 20 years ever since his wife stumbled upon a specific track during a taxi ride in Beijing in 1998.

Back then, it would have been a stretch of the imagination to think that the singer and the diplomat would be brought together through Indian culture, in Taipei, but that is exactly what happened on Friday.

In an Instagram post on Saturday, Madhusudhanan related the encounter, which took place at an event that was held jointly by the India Taipei Association and Red Room to celebrate the works of Indian Nobel Prize-winning poet Rabindranath Tagore.

"Today, at the Red Room event, while I was on stage, a tall figure came and sat in the front row," Madhusudhanan wrote. "During the short intermission, my friend introduced him as her husband ... We didn't even share our names and moved on."

As he was returning to his seat, Madhusudhanan said, a friend pulled him aside and asked whether he had recognized the man he had just met.

Within seconds, Madhusudhanan, he realized that the man was Chau, and he excitedly led his wife Vaidehi Madhusudhanan to where the singer was seated.

Chau was surprised but he told Vaidehi Madhusudhanan his full name -- Zhou Huajian -- in Mandarin, when he was asked by the envoy, according to the post.

Madhusudhanan said his wife could not believe her eyes and ears.

He said he and his wife then related to Chau how they had first heard his music and told him they had been listening to his song "Peng You," which means friends in Chinese, for decades.

Chau was "delighted" by the story, Madhusudhanan said, adding that he has invited the singer and his family to dinner.

"Now that we've become 'peng you's, our families have decided to catch up over an Indian dinner soon," Madhusudhanan said. "Of course, we'll chat about music!"

In his Instagram post, Madhusudhanan also gave the details of how his wife first heard the song "Peng You" 20 years ago.

At the time, Madhusudhanan said, his wife was in a taxi during a visit to Beijing, and the song was playing on the radio.

His wife was drawn to the song and wanted to buy the CD but they did not know the title or the singer, Madhusudhanan said.

Over the next few months, Madhusudhanan said, his wife would visit music shops in Beijing and hum the melody of the song, "to the amusement of shopkeepers and onlookers," but to no avail.

One day, on another taxi ride, Madhusudhanan said, his wife began humming the tune, and the driver was able to identify both the song and artist.

"Peng You" soon began filling the Madhusudhanan household every day, and the family woke up to it, relaxed to it, ate to it and danced to it, the envoy said, adding that their children also grew up listening to it.

Over the years, the family has bought many other music tracks by Chau and continue to enjoy his songs, Madhusudhanan said.

Just a couple of weeks ago, his wife sang a few lines from "Peng You" when they had friends over for dinner, he said.