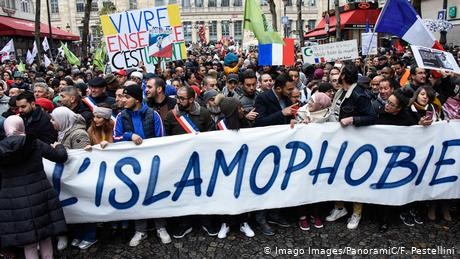 More than 10,000 people marched through the French capital on Sunday to protest against hostility toward Islam and discrimination against Muslims, two weeks after an elderly gunman with far-right links injured two men at a mosque of the southwestern city of Bayonne.

A similar rally took place in the southern city of Marseilles.

The demonstrations were called by left-wing organizations and media outlets, and also received backing from various Muslim groups.

The rallies were somewhat controversial, with some critics saying that several of the groups behind them had radical Muslims or Salafists among their members. The Collective against Islamophobia in France, one of the groups involved, has, for example, been accused of having links with the Muslim Brotherhood, an organization that is classed as Islamist in Western countries.

Others maintained that the protest undermined France's tradition of secularism, which includes a cherished right to criticize religions of whatever kind. The state secretary in charge of fighting discrimination, Marlene Schiappa, went so far as to call the demonstration a protest again secularism "under the guise of combating discrimination."

In an apparent bid to counter this argument, some protesters carried banners reading "Yes to criticism of religion, no to hate against the faithful."

A survey by pollster Ifop earlier this month found that more than 40% of Muslims in France felt they had experienced religious discrimination. Islam is the second biggest religion in France, and the country has the largest Muslim minority in Western Europe.

The already heated debate on the role of Islam in French society was given more fuel recently when a member of the far-right National Rally party publicly told a Muslim mother to take off her headscarf during a school excursion.