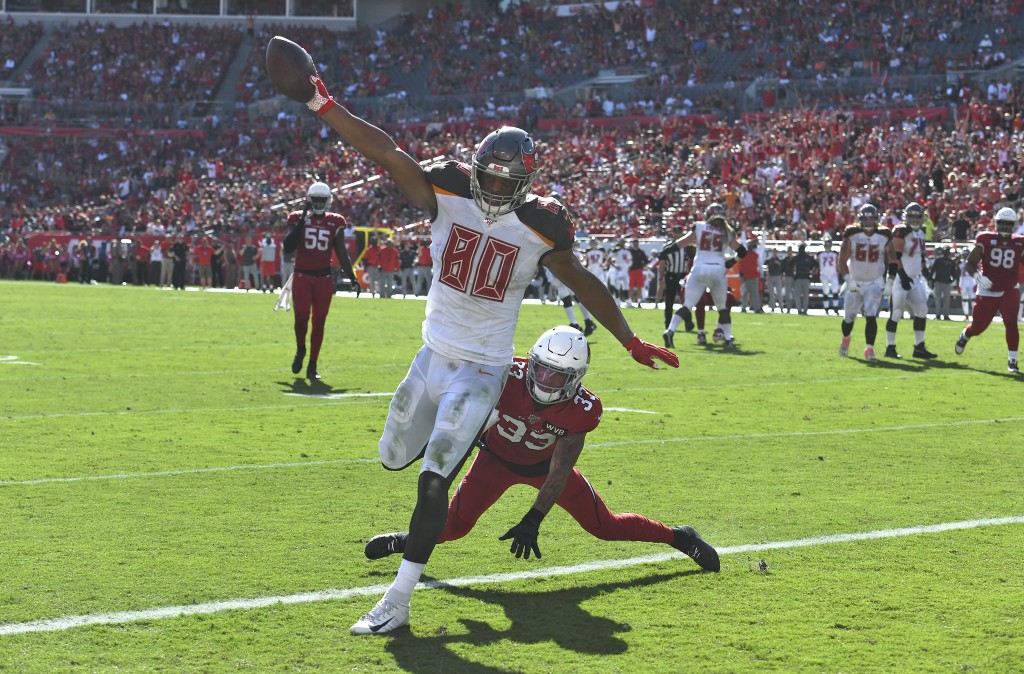 TAMPA, Fla. (AP) — Jameis Winston threw for 358 yards and one touchdown, helping the Tampa Bay Buccaneers rally to snap a four-game losing streak with a 30-27 victory over the Arizona Cardinals on Sunday.

Barber's TD with less than two minutes left was set up by a booth review that determined Cardinals safety Jalen Thompson committed pass interference against Mike Evans in the end zone, giving Tampa Bay a first down at the Arizona 1.

Murray threw for 324 yards and three TDs to Christian Kirk, whose 15-yard scoring reception put the Cardinals up 27-23 midway through the fourth quarter. Kirk also scored on receptions of 33 and 69 yards and finished with six catches for 138 yards.

Arizona also hurt its chances by losing a fumble for the first time all season and a huge second-half drop by tight end Maxx Williams that cost the Cardinals a sure touchdown early in the third quarter.

Winston, meanwhile, overcame throwing two interceptions — one of which led to a field goal — with a 10-yard TD pass to O.J. Howard and leading 60-yard drive that Ronald Jones finished with a 7-yard scoring run.

Cardinals: RT Justin Murray (knee) was inactive. Justin Pugh shifted from LG to RT, with OL Mason Cole starting at LG. ... CB Patrick Peterson left the game in the fourth quarter with a calf injury and did not return.

Buccaneers: Played without injured starters CB Carlton Davis III (hip) and OLB Carl Nassib (groin), who were replaced by rookie CB Sean Murphy-Bunting and OLB Jason Pierre-Paul, who made his first start since returning from a neck injury suffered in an offseason car accident.

Cardinals: at 49ers on Sunday.