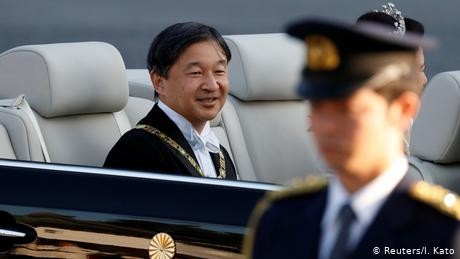 Japanese Emperor Naruhito and Empress Masako were driven through the streets of central Tokyo on Sunday as part of festivities marking his enthronement.

"To witness this historical moment with my own eyes and to see the smile of the emperor and empress, I wanted to be in the front," said Hiyori Okazai, who had waited in line in front of the Imperial Palace since Saturday.

Emperor Naruhito ascended the throne after his father Akihito abdicated, marking the first time in two centuries that an emperor had stepped down during their reign.

Tens of thousands lined the streets of central Tokyo to catch a view of the royal couple, with some saying their younger age made them feel closer.

"The Emperor is a few years younger than me but belongs to the same generation, and I feel connected with him," Yukari Oshita told Agence France-Presse. "And Empress Masako is someone who can be a role model for modern women with full-time jobs."

The Harvard-educated empress gave up life as a ranking diplomat to ascend the throne with her husband, Naruhito.

The origins of Japan's hereditary monarchy — believed to be the oldest in the world — date back 2,600 years. The emperor is also considered the highest authority in Japan's native Shinto religion.