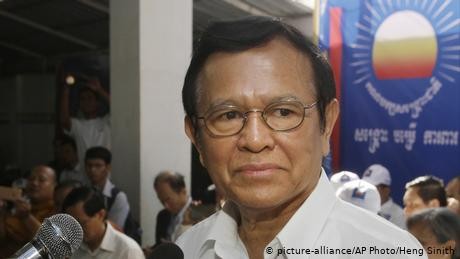 The Phnom Penh Municipal Court said in a statement that Sokha could leave his house, but could not engage in political activity or leave the country.

Sokha, who co-founded the Cambodia National Rescue Party (CNRP), quickly called for the treason charges against him to be dropped.

"I expect today's decision to be the first step, but I, as well as many other Cambodians who have lost political freedom, still need real solutions and justice," he wrote on Facebook.

Sokha was arrested in 2017 and accused of plotting to overthrow the government of Cambodian strongman Hun Sen, who has been in power since 1985.

The opposition leader was sent to a remote prison, then confined to his house and the surrounding block and prohibited from talking to the media.

His freedom was announced a day after CNRP co-founder Sam Rainsy flew into the region from self-imposed exile in France saying he wanted to return home to rally opponents of the authoritarian ruler.

Rainsy fled to Paris in 2015 after a conviction for criminal defamation and faces a five-year sentence in a separate case — charges he says were politically motivated.

Rainsy, who was prevented from getting on a flight from Paris to Thailand on Thursday, rerouted his trip via Kuala Lumpur, where he arrived on Saturday.

Although it was unclear how Rainsy will get back to Cambodia, the government said on Saturday it had lifted an entry ban but warned he would have to face justice in several legal cases.

Cambodia has been under pressure to soften a political crackdown on dissent as the European Union considers whether to go ahead with potentially damaging cuts to trade preferences.

Dozens of opposition activists have been rounded up in recent weeks in Cambodia, and the former Khmer Rouge commander Sen has accused his opponents of an attempted coup.

CNRP was banned ahead of elections swept by Hun Sen last year but which were condemned as a farce by Western countries.

While Sokha and Rainsy are political partners, they are also rivals and bad feelings exist between their supporters because of Kem Sokha's willingness to stay home while Sam Rainsy has been in self-imposed exile since 2015.