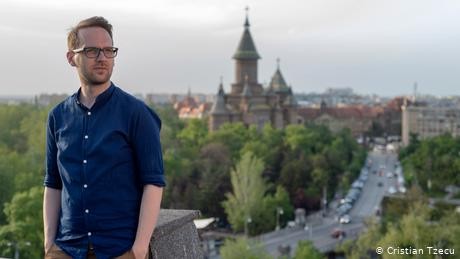 Most of his belongings are in a moving truck downstairs and Dominic Samuel Fritz is just about ready to leave his spacious Berlin apartment and the incredible view his balcony offers.

As someone who, like him, chose to move to the German capital, I can see why leaving makes him sad. But he's doing so with an ambitious plan: Fritz wants to become the mayor of the Romanian town of Timisoara. A town he said he "loves very much." Since 2015, any EU citizen is entitled to run for mayor in Romanian local elections.

As he sets off for Romania, there is, of course, no guarantee he'll win the election he quit his job as office manager for German former President Horst Köhler to take part in. And, even as a Timisoara native, I wonder if I would have taken such a significant step.

It's a 1,200-kilometer-trip (745-mile) from Berlin to Timisoara, which is Romania's third-largest city with over 330,000 residents and located near the Serbian and Hungarian borders. Because there are no direct flights from the German capital, Fritz will fly to Budapest and then continue onward by bus. He is familiar with the journey as he's spent more than 16 years regularly visiting the Romanian city.

Fritz, now 36, spent a gap year volunteering at a shelter for children on the outskirts of Timisoara. He said that's when he fell in love with the town. Later, he studied politics and public administration in Germany, France and England, but he continued to make regular visits to Timisoara.

Fritz announced his candidacy on his website, dominicprimar.ro, or "dominicmayor," by writing: "After 10 years in the fields of intentional development, diplomacy and public management, I want to apply my passion for public policy in a specific, local context that has become very dear to me. I want to become mayor in a place that I now call home: Timisoara."

The hashtag #dominicprimar has trended on social media, and, judging by the comments, Fritz has become popular indeed.

Fritz made a name for himself in Romania by participating in the Bucharest and Timisoara anti-corruption protests and by leading various social and cultural projects in the country. That turned him, almost by coincidence, into a politician, he said. Then in the summer of 2019, the new Save Romania Union (USR) party nominated Fritz as their mayoral candidate. The local elections will be held in June 2020.

Fritz has grown tremendously popular on Facebook and other social media platforms. While part of the buzz can be attributed to the novelty of a foreigner aiming to become a mayor in Romania, he is also gaining in popularity for not coming across like a typical, polished politician. People find him approachable, as quickly became evident during an interview when a Romanian man yelled over from a fancy cafe: "Hey Dominic, let's get together for a chat some time!"

Online, many address Fritz by his first name and love his creative election campaign. He recently called on the people of Timisoara to invite strangers from other towns to dinner on December 1, Romania's national holiday. He suggested that 100 strangers should be invited to celebrate Romania's 101st birthday. Jokingly, he promised he'd be the 101st person.

Fritz has a clear idea of what he wants to change in Timisoara. He's running on a platform of modernizing public transport, restoring each district's distinct character, turning the city into an economic, technological and cultural hub and expanding the use of digital technology in public administration.

Fritz's rival from the National Liberal Party, Nicolae Robu, is currently serving his second term as mayor and is under pressure. The former dean of Timisoara's Polytechnic University (UPT) has repeatedly made headlines for his policies. He has been accused of failing to adequately prepare the city for when it becomes the European Capital of Culture in 2021. And Fritz said, "The municipal administration is stifling the city's innovative and creative energy." That's why Fritz said he wants to unleash the city's potential.

Is there anything Fritz doesn't like about Romania? He laughs, and tells me: "The lack of punctuality." Adding: "The worst thing is that it's contagious."

In any case, Fritz wants to change the mentality of the Romanian people, he tells me. He says there is an absurd Romanian phrase that goes a little something like this: "Oh, what can you do? Well, nothing, really." Fritz says he took this defeatist phrase and used it in the campaign clip in which he announced his candidacy – albeit with a positive spin. In the video, you can see him say: "Oh, what can you do? Well, quite a lot of things, actually!" The clip soon went viral on Facebook, garnering more than 200,000 views.

If his election campaign continues to be just as successful, Timisoara might soon have a German mayor.