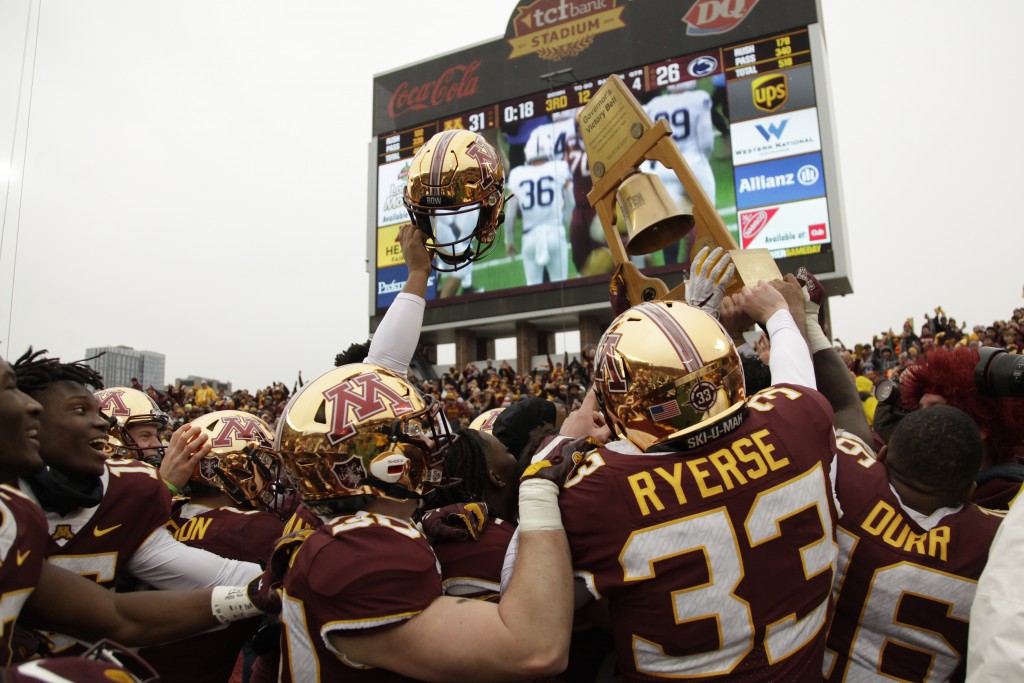 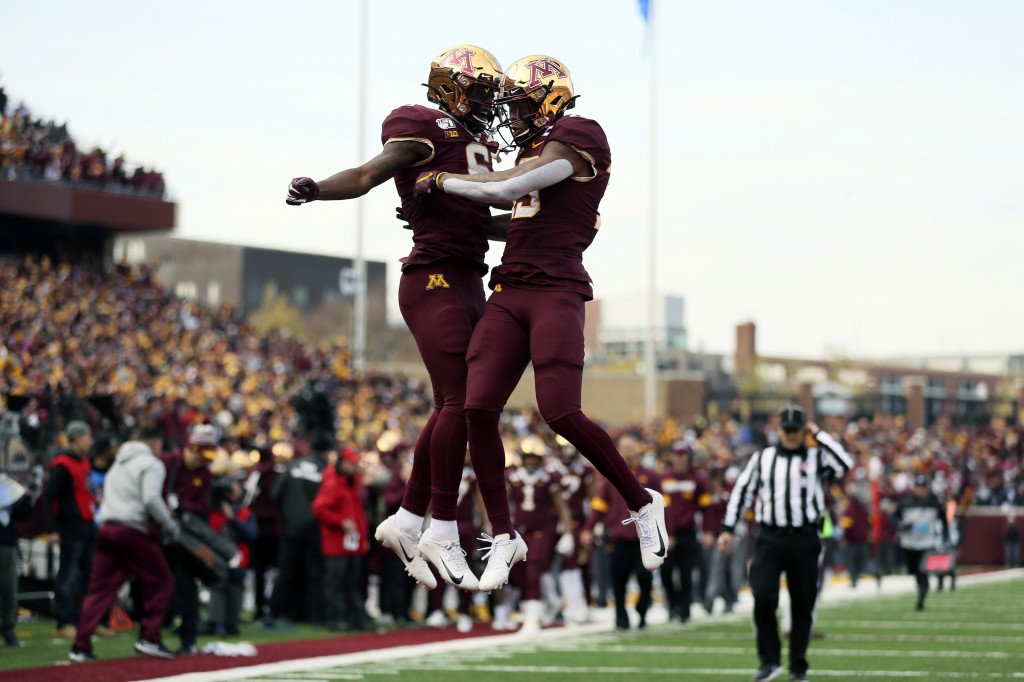 MINNEAPOLIS (AP) — Minnesota's Jordan Howden picked off Sean Clifford's pass in the end zone with 1:01 left, the third interception thrown by Penn State's quarterback, and the 13th-ranked Gophers held on for a 31-26 victory Saturday over the fifth-ranked Nittany Lions for their first win over a top-five team in 20 years.

Tanner Morgan passed for 339 yards and three touchdowns to direct a dismantling of Penn State's staunch defense. Minnesota (9-0, 6-0, No. 17 CFP) not only remained undefeated, but stayed on track for its first trip to the Big Ten championship game.

The first sellout crowd for the Gophers at home in four years swarmed the field after the clock ran out, reveling in the biggest step forward yet under coach P.J. Fleck in his third season. The Gophers scrambled the College Football Playoff picture, too, after Penn State (8-1, 5-1, No. 4 CFP) emerged with a top-four spot in the first edition of the rankings.

Rashod Bateman got the Gophers going with a 66-yard score on their first possession and finished with seven catches for 203 yards, the second-most in program history. Tyler Johnson had seven receptions for 104 yards and a touchdown, too, as Minnesota made enough early gains to hold up during the late rally by Penn State.

Antoine Winfield Jr. had the first two picks in the first half, matching the FBS lead and setting the Minnesota record with seven on the season. Both were inside the 10.

A team that gave the Buckeyes (9-0, 6-0 Big Ten, CFP No. 1) headaches last season was no trouble this time, even without the fierce pass rushing of Young. The preseason All-American was suspended Friday while Ohio State investigates a possible NCAA violation involving a loan.

J.K. Dobbins rushed for 90 yards and two touchdowns as the Buckeyes built a 42-0 halftime lead and the backups added to it in the second half. Fields tossed touchdown passes to Binjimen Victor, K.J. Hill and Chris Olave before taking a seat in the second half. His backup, Chris Chugunov threw another one in the third quarter. Ohio State piled up 705 yards of offense and 40 first downs.

FORT WORTH, Texas (AP) — Denzel Mims made a leaping 4-yard touchdown catch in the third overtime for Baylor, capping another comeback victory that kept the Bears undefeated.

Charlie Brewer also threw a 20-yard touchdown pass to Mims on fourth down in the second overtime to extend the game. Brewer had a 3-yard scoring run in the first overtime.

Baylor forced overtime when John Mayers kicked a 51-yard field goal with 36 seconds left in regulation. The ball just cleared the crossbar to tie it at 9. TCU (4-5, 2-4) led 9-0 after Jonathan Song made two field goals at the end of the first half.

The Mustangs (9-1, 5-1 American Athletic) played from ahead and kept it that way in a second straight game with more than 1,000 combined yards. SMU had fallen behind and failed to close the gap last week in a 54-48 loss to No. 19 Memphis.

Buechele threw for 414 yards as the Mustangs finished with 636 total yards to 644 for the Pirates (3-7, 0-6). Kylen Granson caught three touchdowns passes, including a 31-yarder on fourth-and-20 with SMU leading 45-44 midway through the fourth quarter. Granson had 138 yards on seven receptions, and James Proche finished with 14 catches for 167 yards.

Jones, who ran for 157 yards, had three rushing touchdowns for the third time this season, giving him 18. His total touchdowns reached 20, one more than Dickerson had in 1981 — all on the ground. East Carolina's Tyler Snead caught 19 passes for 240 yards.