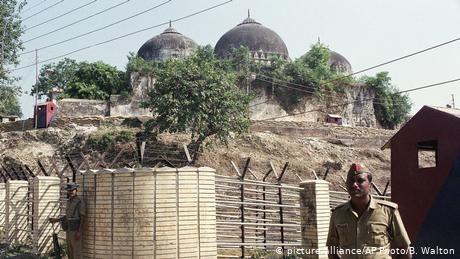 Amid heightened security across India, the Supreme Court on Saturday unanimously ordered a government-run trust be set up to eventually pave the way for construction of a temple at the disputed Ayodhya land.

The court said the government should, within three months, formulate a scheme to set up a trust for possession of the inner and outer courtyards of the disputed site. Until such a trust is formed, the government will hold the land.

A five-judge Constitution bench headed by Chief Justice Ranjan Gogoi, who retires on November 17, said the Hindu litigants were able to establish their case that they were in possession of the outer courtyard. It added that the Muslim side was unable to prove their exclusive possession of the inner courtyard.

The 2.77 acres of disputed land in Ayodhya has gone entirely to Hindus, and Muslims will have to be given an alternative piece of 5 acres to build a mosque, the Supreme Court concluded in a unanimous judgment.

At the heart of the case was a property dispute dealing with the 2.77 (1.1 hectares) acres and who owned this land. But it was this piece of real estate that became the most divisive political weapon in modern India, which has plagued Hindus and Muslims for 70 years.

The judgment held the Hindu belief that the disputed site is the "birthplace of Lord Ram” is correct. It also said that the Sunni Waqf Board has not been able to prove adverse possession of the site, while there is evidence to show that Hindus worshipped at the premises of the mosque prior to 1857.

All three parties appealed the decision and Saturday's judgment comes after day-to-day hearings for 40 days.

Appeals for calm and respect for order

Political reactions to the judgment were more or less on expected lines as most parties welcomed the order even as a tight security cordon was thrown around the northern state of Uttar Pradesh in the wake of the judgment.

The government had not just fortified Ayodhya in anticipation of trouble but across the country, security forces have been put on a high alert. In some towns, internet services were also suspended to stop the spread of rumors.

"The halls of justice have amicably concluded a matter going on for decades. Every side, every point of view was given adequate time and opportunity to express differing points of view. This verdict will further increase people's faith in judicial processes,” Modi tweeted.

"We appeal to all the parties concerned and to all communities to abide by the secular values and spirit of fraternity enshrined in our Constitution. It is the responsibility of each one of us to reaffirm our tradition of mutual respect and unity among all that has defined our society through the ages," said Congress spokesperson Randeep Surjewala.

The Rashtriya Swayamsevak Sangh or RSS, which is the ideological mentor of the ruling BJP, was quick to welcome the decision.

"We welcome the court verdict on the Ayodhya issue, it should not be seen as anybody's victory or loss. We should forget disputes of past and work together to build Ram temple," said RSS Chief Mohan Bhagwat in a press conference.

But not all were happy with the unanimous order of the court and were even thinking of further legal recourse.

"We respect the judgment but we are not satisfied, we will decide the further course of action as the judgment is not according to our expectations," Zafaryab Jilani of the All India Muslim Personal Law Board told DW.

"We are not satisfied with the verdict. The Supreme Court is indeed supreme but not infallible. We have full faith in the constitution, we were fighting for our rights, and we don't need a 5-acre land donation. We should reject this 5-acre land offer, don't patronize us," said All India Majlis-e-Ittehadul Muslimeen chief Asaduddin Owaisi.

The religious site has become a fixture in the imagination of millions of Hindus and Muslims in India. The demolition of the centuries-old mosque by a Hindu mob in Ayodhya on December 6, 1992 sparked deadly religious riots around the country, killing about 2,000 people. Jihadist groups cited the destruction of the mosque as a reason behind the 1993 Mumbai bombings and other attacks in the 1990s.

Ever since the Supreme Court took it on itself to hear the sensitive issue on a daily basis, the calls for the temple construction have regained momentum as the BJP enjoys a majority in national parliament and also in the Uttar Pradesh state assembly.

While delivering its verdict, the judges referred to a report by the Archeological Survey of India (ASI), which they said confirmed that a structure existed underneath the mosque but did not specify whether it was a temple.

Prime Minister Modi's government had detailed in its 2014 general election manifesto that it would "explore all possibilities within the framework of the constitution” to facilitate the construction of a Ram temple at the disputed site.

Uttar Pradesh Chief Minister Yogi Adityanath, a Hindu priest and BJP leader, had even promised a huge statue of Lord Ram in Ayodhya. He has also changed the name of the district where Ayodhya town is located from Faizabad last year, which has Muslim origins, to Ayodhya.

While the majority Hindu community is celebrating the court's decision, the Muslim community is content with the hope that Ayodhya would remain peaceful.