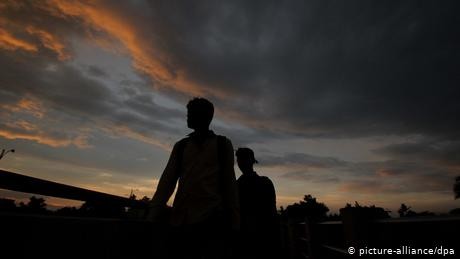 Bangladesh has evacuated more than 300,000 people from at-risk areas as part of emergency preparations ahead of a powerful cyclone's landfall on Saturday.

A senior official told Agence France-Presse that figure could reach up to 1.5 million before Cyclone Bulbul's landfall on Saturday evening.

"More people will be moved to the shelters, and we will hopefully be able to take all vulnerable people to safety," said Enamur Rahman, who serves as junior minister for disaster management.

More than 50,000 volunteers were mobilized to warn people living in low-lying areas of the approaching cyclone. Winds are expected to top speeds up to 150 kilometers per hour (95 mph).

'Gusts across the country'

Meteorologists are expecting parts of Bangladesh's low-lying coastline to be inundated by a storm surge of more than two meters (6.6 feet).

"The cyclone will pass through mid-west region which may bring heavy rainfall or thunder showers accompanied by gusts across the country including Dhaka," said Ashraful Alam, a meteorologists at Bangladesh's weather authority, reported Dhaka-based The Daily Star.

Over the past decade, Bangladeshi authorities have ramped up emergency preparations in response to cyclones after more than 100,000 people were killed and millions more made homeless when a powerful storm struck in 1991.

Read more: What is a 'bomb cyclone?'