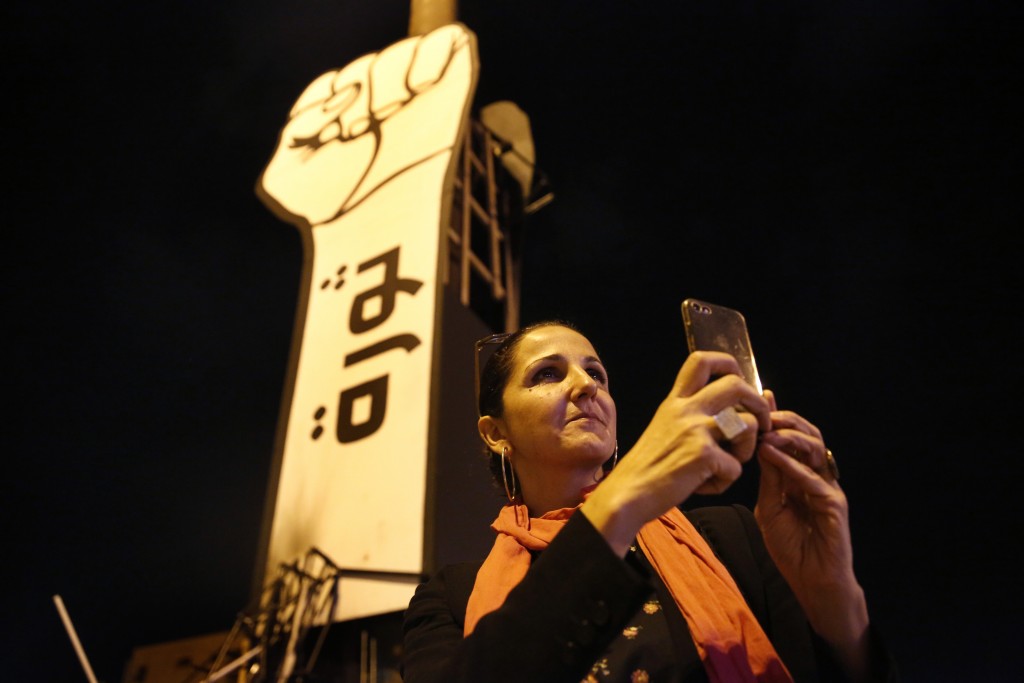 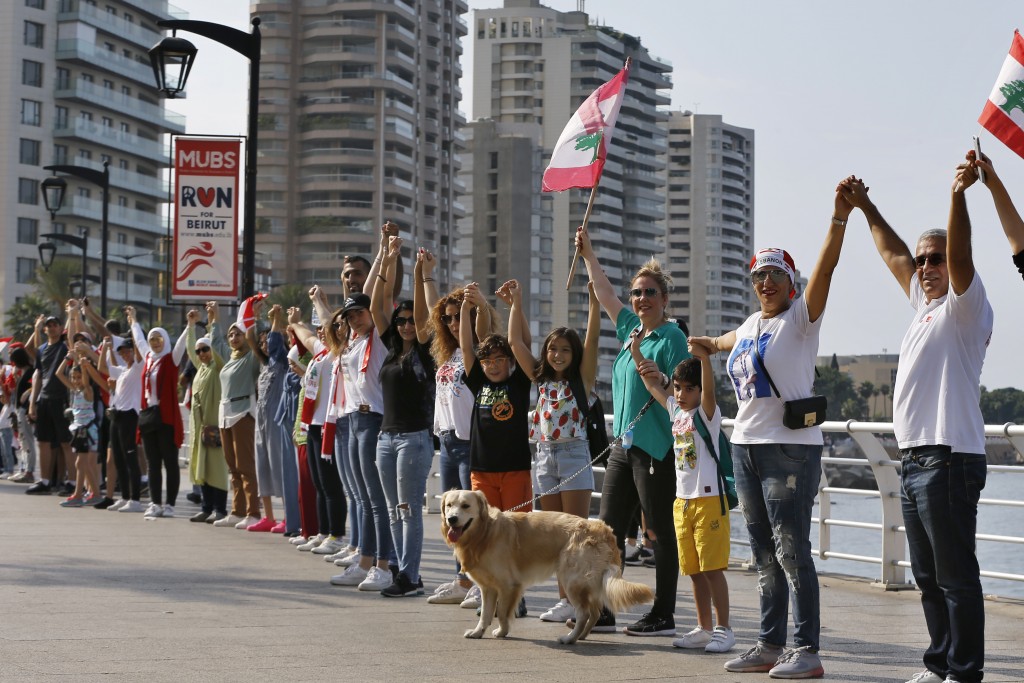 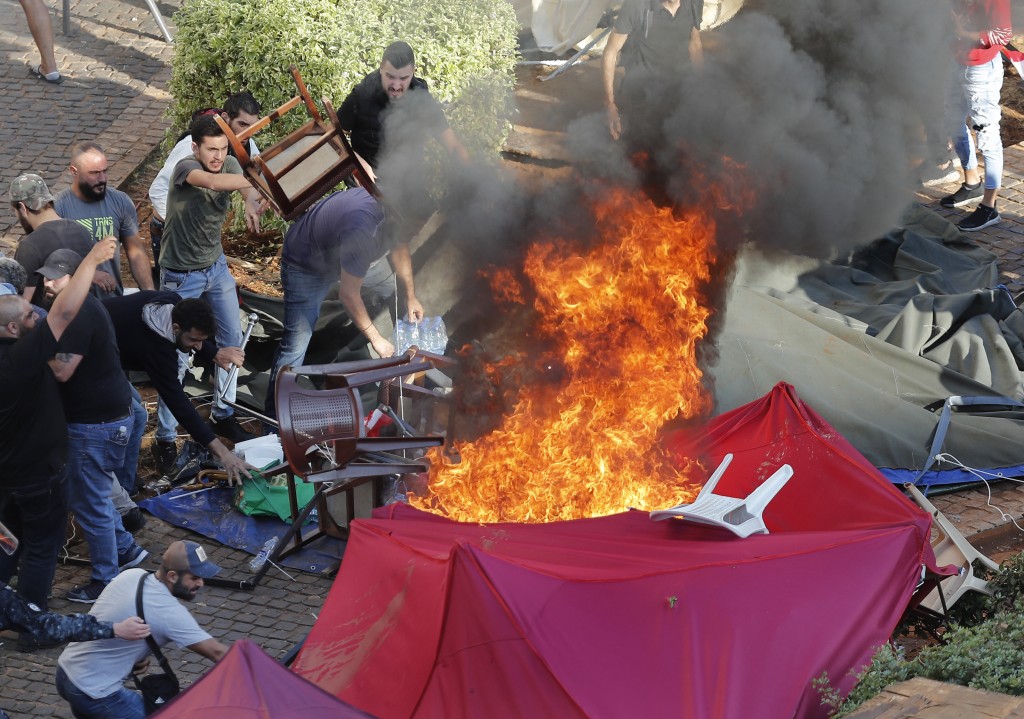 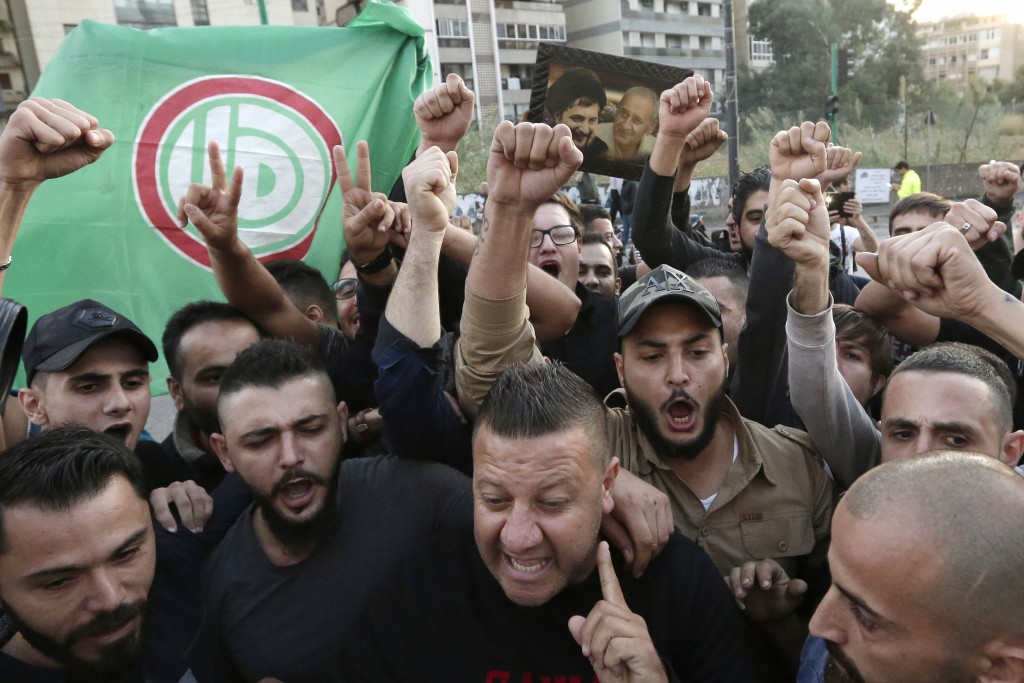 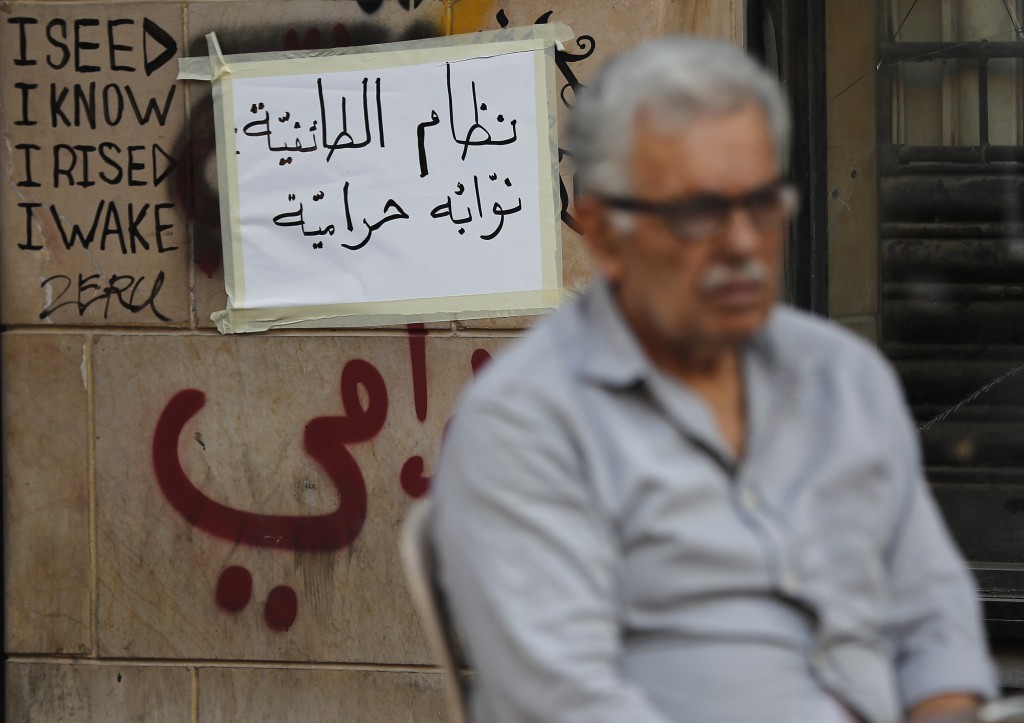 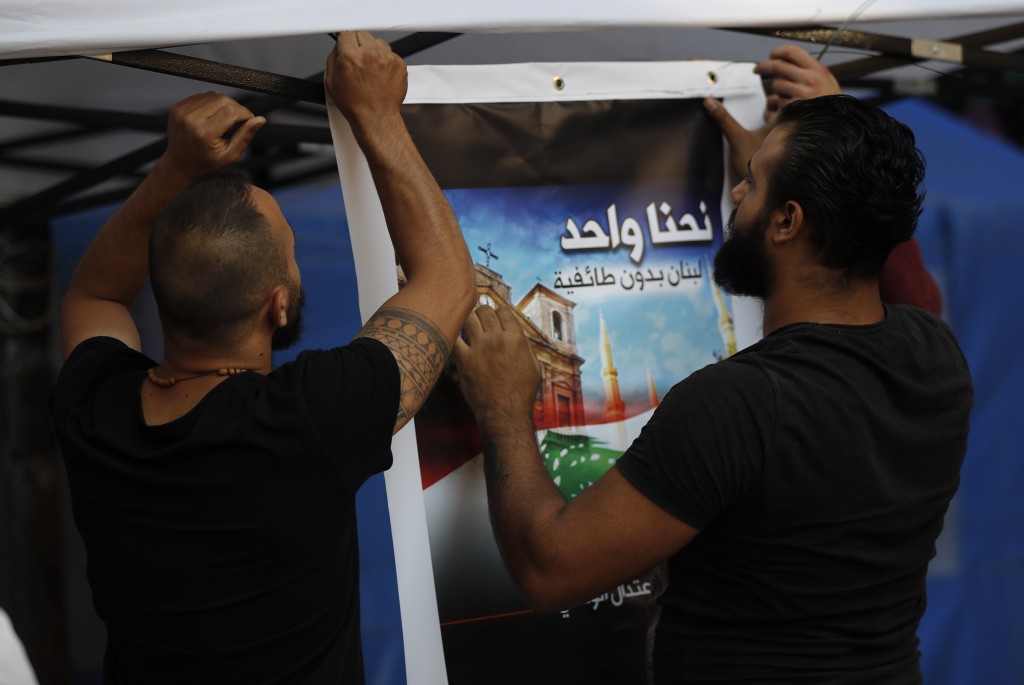 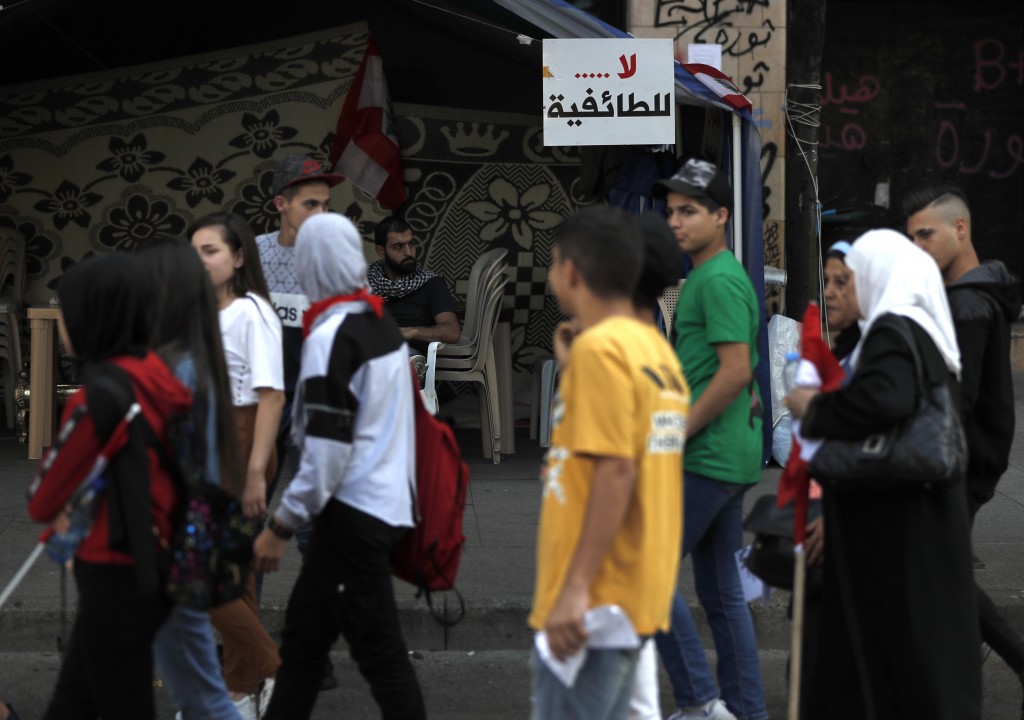 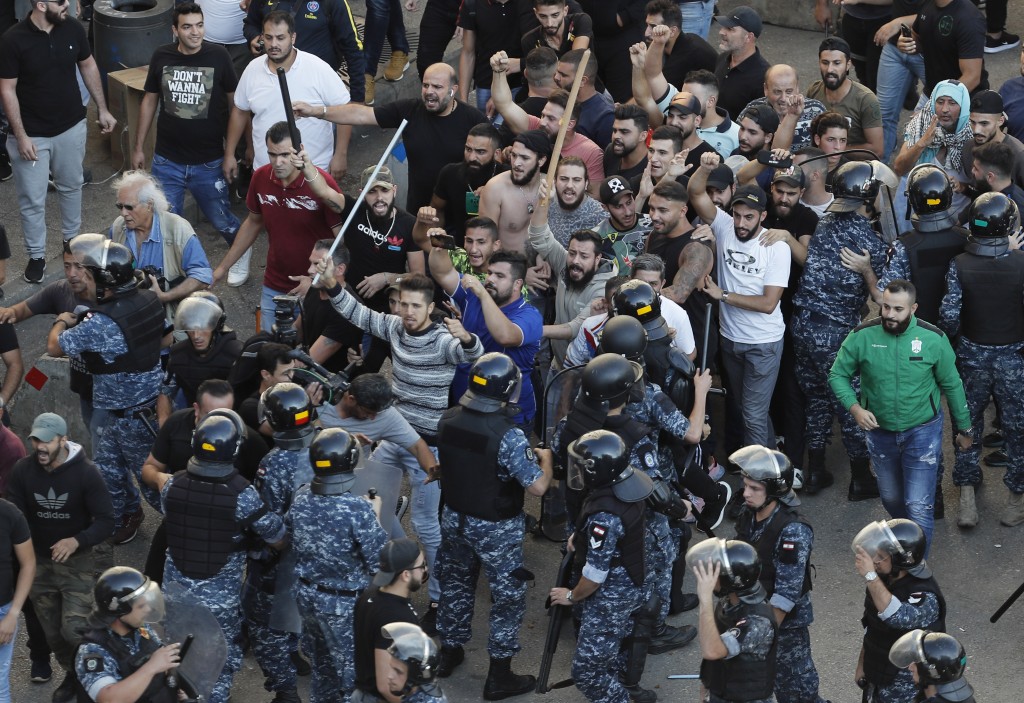 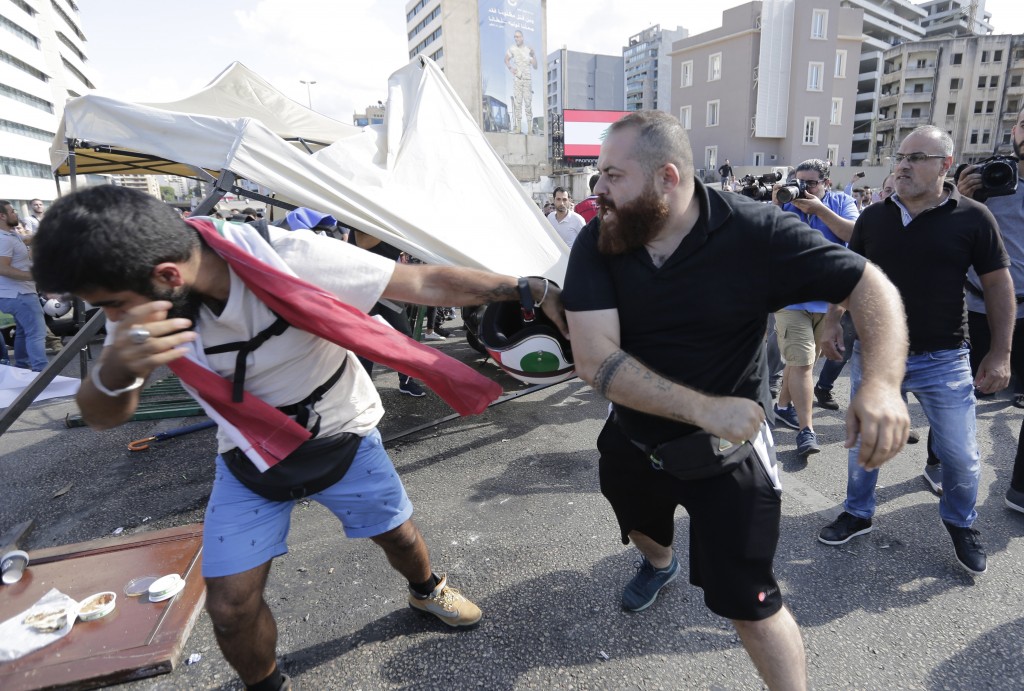 BEIRUT (AP) — Lebanon's protests are bringing out people from across the country's spectrum of faiths and communities trying to throw out the entire ruling elite. They give a glimpse into a Lebanon transcending longtime divisions among sects.

But the young protesters face an entrenched political leadership that depends on sectarianism and an older generation that fears disrupting it could bring back civil war.

That threat resonates less with a generation that has little or no memory of a war that ended in 1990.

The protests erupted over proposed new taxes but snowballed into calls for the entire political elite to go. For them, sectarian power-sharing is bound together with corruption and mismanagement that has impoverished them and left infrastructure so decrepit that power outages hit every day.

Singer Tania Saleh grew up amid a civil war that robbed her of her childhood, of her friends and neighbors and of the Lebanon she so loved. For years, she has sung the pains of sectarian schisms.

"You Lebanese have created 10 or 12 gods ... You divided me. You aggravated me. You parceled me out and you became divided," one of her songs says, imagining a conversation with God. "He who wants to pray ... must understand that God, the creator, has not made one sect better than the other."

Based on a poem written in 1975, the year the war broke out, the lyrics still felt searing and relevant enough for Saleh to add to an album in 2017.

Now, the 50-year-old hopes younger Lebanese can make her country dance to a different tune, one that transcends sectarian divisions. She is inspired by the mosaic of protesters who have come together in the past weeks from across the religious, political and geographic spectrum, united in disdain for a political class they say has cheated them of a decent future.

"The new generation is not like us," she said. "We have seen too many tragedies and so we are scared."

The demonstrators have provided those eager to see the country move past its sectarian legacy with a glimpse of what can be. But Saleh says she has no illusions about how long that path will be. Those aspirations are increasingly being put to the test by a system that delicately balances among 18 officially recognized sectarian groups.

The system is locked into the country's politics. The posts of the president, prime minister and parliament speaker are given to the biggest communities — Maronite Christian, Sunni Muslim and Shiite Muslim. Most political parties are explicitly based on sect, and politicians pass out patronage and jobs to their communities.

It is also engrained in society, where many fear domination by other sects and one sect's gain can be seen as another's loss.

Looming over everything is the fear new violence might erupt if anyone wrecks the balance.

That threat resonates less with a generation that has little or no memory of a war that ended in 1990. The protests erupted over proposed new taxes but snowballed into calls for the entire political elite to go. For them, sectarian power-sharing is bound together with corruption and mismanagement that has impoverished them and left infrastructure so decrepit that power outages hit every day.

Hiba Farhat, a 31-year-old Shiite protester, said politicians pit sects against each other so "people would say, 'Ok, I accept corruption and I accept this leader; I just need him to protect me from the other sect.'"

Slogans like "the era of sects has ended" and "a revolution against fear" are scrawled in graffiti and proclaimed on banners. At a recent protest, demonstrators poured into Beirut squares in response to calls to keep unified.

Wearing a flowing black robe and a light-colored scarf framing her face, 25-year-old Huda Wissam smiled and swayed to the tunes of national songs as others rhythmically stomped their feet. With her was her 15-year-old brother and 20-year-old sister.

"I am veiled and when I see a Christian smiling at me, I get reassured that we have shed off sectarianism," said Wissam, a Sunni Muslim. "The challenge is for us all to remain together, Christian, Muslim, Shiite or Sunni ... then we will succeed."

Her father, she said, wanted her to stay out of protests, warning, "This will lead to a civil war."

"He doesn't want his children to become victims for something that won't happen. He has given up, but we won't," she said. "I don't want to wait until I am my parents' age and then there would be nothing I can do."

On a recent night, a small group of protesters sat on a sidewalk by the bell tower of a church in the northern Beirut suburb of Jal el-Deeb and took stock of how far they have come.

"The grudges that they have planted in us, our generation has put an end to them. I no longer feel sectarianism. Lebanon comes first," Charbel Elie, 32, told the group.

He wanted to know what the protesters had gained.

"Today, we don't ask what sect you belong to and what area you're from," and fear of criticizing leaders has been broken, replied Nayla Geagea, an activist and lawyer. She walked them through constitutional steps to forming a new government.

A 75-year-old man in the circle spoke up to say he had no questions but wanted to apologize to the younger generation for the country they were inheriting.

"We will fix it, uncle," someone yelled.

But protesters have had to keep sectarianism from fragmenting their own ranks. Geagea pointed out that when the prime minister stepped down — one of the demands of protesters — some made it look like the demonstrators were targeting his Sunni community. "We have to defeat this rhetoric," she said.

Amid grumbling over roadblocks and fears of economic collapse, men shouting Shiite religious slogans and chants in support of Hezbollah leader Hassan Nasrallah confronted protesters in one instance.

Some Shiites who initially joined demonstrations have stayed away after Nasrallah — even as he expressed sympathy for protesters' demands — accused foreign powers of exploiting them to undermine Hezbollah and warned against dragging the country into civil war.

Tensions between opposing Christian factions have also run high. Some supporters of President Michel Aoun accuse rivals from the rightwing Lebanese Forces movement of seeking to topple him. The two sides fought each other brutally in the final years of the civil war.

Aoun backers held a demonstration to support him and the president has called for unity. "The sectarian system will not get toppled through protests," said one of them, 27-year-old Elias Khoury. "It will get toppled when the hearts, not the laws, change."

The two are tangled together — a social mentality clinging to sect and a political class whose power depends on sectarianism.

"When you ask for the dismantling of the political sectarian system ... you're basically asking the current political elite to commit group suicide. They're not going to do that," said Maha Yahya, director of the Carnegie Middle East Center.

The young "want basic, fundamental rights and for them they really have nothing to lose," she said. "They recognize that this system hasn't worked for their parents; it is not working for them."

Saleh, the singer, said she takes hope from a generation she feels is not as sectarian. Her son, she said, doesn't care to know the faith of his schoolmates.

Just like her art, her life has been colored by Lebanon's intricacies.

Her world changed at only six. The civil war broke out and school friends and neighbors started disappearing. The Christians fled to other areas. Born to a Sunni father and a Shiite mother, Saleh would go out sometimes with a cross dangling around her neck, a statement of defiance to the fighters who stole the normalcy of her life.

As battles raged, Saleh and her family left too, again and again and again. They bounced from home to home, escaped briefly to Kuwait. These memories are seared in her mind. Her mother begging armed men to let them drive through. Listening every day in Kuwait to iconic Lebanese singer Fairouz belt out "I love you, oh Lebanon."

"There is no hope for me to enjoy a proper country," Saleh said. "But the hope is for our kids and grandkids. Let them start now better than waiting for when it's too late."