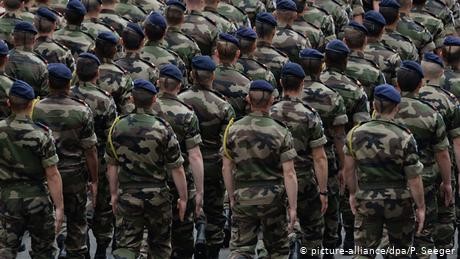 "Europe must also learn the language of power," von der Leyen said during a speech on European policy in Berlin.

"On the one hand, this means building our own muscles [in areas] where we've long been relying on others — for example in security policies," the former German defense minister said. "That also means applying our existing power in a more targeted way in areas where European interests are concerned."

In the future, she added, the EU's partners should expect stronger positions from the bloc as the former strategy of exercising "soft power" is no longer enough in today's world.

Von der Leyen's remarks in the German capital came on the eve of the 30th anniversary of the fall of the Berlin Wall. They also come a day after Germany's current defense minister, Annegret Kramp-Karrenbauer, called for Germany to play a more active military role in the world.

The incoming Commission chief also remarked on Brexit in her wide-ranging speech, saying that although the process has been a "shock," it has also brought the bloc closer together.

"As paradoxical as it sounds, the shock of Brexit has strengthened our unity," she said.

The UK's turbulent divorce from the bloc "has not only shown what it means to leave the EU but also how much each country stands to gain as part of the European Union," von der Leyen said.

Von der Leyen said she also wants the EU to take the role of a world leader in the fight against climate change.

"We can and must make Europe the first climate-neutral continent by 2050," she said.

Although Europe only produces 9 to 10% of global CO2 emissions, she noted that the bloc takes the reins in producing products and processes to protect the environment.

"Europe can take the lead in low CO2 emissions technology, showing that investing in the climate can be profitable and sustainable."

One area where the EU can start flexing its muscles more is when it comes to its approach to China, von der Leyen said. Although China is a major player in trade with the bloc, the EU is Beijing's largest trading partner.

"We can influence the conditions under which we do business," von der Leyen said, adding that the bloc will ensure that Chinese companies doing business in the bloc "also adhere to our standards."

The population across the bloc's current 28 member states may be aging and declining, but "Europe is more attractive than we believe it to be."

"We have something that is invaluable: rule of law, freedom, democracy, openness to numerous lifestyles — that's something that young people can't find in China or Russia," she noted.