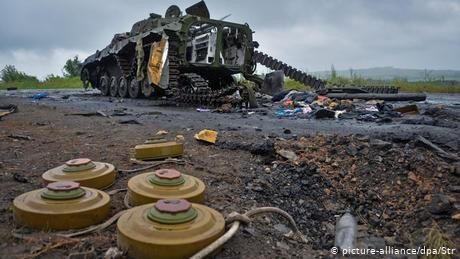 In a legal victory for Ukraine, the United Nations' top court ruled Friday it had jurisdiction to hear a lawsuit filed by Ukraine against Russia over Moscow's alleged support of pro-Russian separatists and discrimination in annexed Crimea.

The International Court of Justice's judges found that it could hear the case based on anti-terrorism and anti-discrimination treaties signed by both countries.

Read more: What does Germany do for Ukraine?

Moscow had asked the court to dismiss the case, arguing Ukraine was attempting to use the proceedings to reach a ruling on the legality of Russia's 2014 annexation of Crimea.

Presiding Judge Abdulqawi Yusuf said Ukraine had not asked the court to rule "on the status of Crimea or on violations of the rules of international law," other than those related to UN anti-discrimination and anti-terrorism treaties.

The ruling means that a legal battle between Moscow and Kyiv that could take months or years to settle will move forward. Rulings from the International Court of Justice are final and binding.

Ukrainian Deputy Foreign Minister Olena Zerkal said outside the court in The Hague that the ruling meant "Russia will be accountable and have to present their opinions and their views."

Read more: Flight MH17, five years on: What happens next?

The other plank of Ukraine's case relates to the deteriorating rights of ethnic Tartars and other minorities following Russia's annexation of Crimea in violation of UN anti-discrimination conventions.

A ruling on Moscow's role in backing separatists could bring to light any Russian role in the downing of Malaysia Airlines Flight MH17 over rebel-held eastern Ukraine in July 2014. All 298 passengers and crew were killed when the plane crashed.

Read more: MH17 downing and probe: What you need to know

A Dutch-led international investigation found that the airliner was shot down with a Russian missile, and has charged three Russians and an Ukrainian with murder. Russian denies any involvement.

Minister Zerkal said Friday's ruling means that details of the MH17 case will be heard and that could boost prospects for an investigation at the UN Security Council, where Russia has blocked attempts to establish a tribunal into the incident.