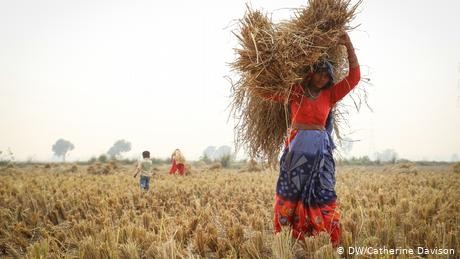 As a cloud of pollution enveloped Delhi earlier this week, closing schools and prompting the announcement of a public health emergency, new hope in mitigating the capital's annual pollution crisis might be found in a government plan to transform the agricultural sector.

Delhi has seen the worst pollution since 2016 this month, with some parts of the city experiencing over 150 times the concentration of toxic particles recommended by the World Health Organization.

Although a variety of measures – such as restricting Diwali fireworks and halting construction in the city – have been implemented in an attempt to curb the pollution, blame has largely been apportioned to stubble burning in the neighboring states of Punjab and Haryana.

As farmers set fire to their fields to clear excess crop residue in time for the wheat sowing season, Delhi's Chief Minister tweeted that the fumes were transforming the capital into a "gas chamber."

"If you take an average of the whole year, the contribution of agricultural burning [to Delhi's air pollution] is only 5%," says Dr Sumit Sharma, an Associate Director at TERI, a New Delhi-based research institute.

"But if you talk about specific days when the fires are peaking, then it can go up to 40%."

Despite an order on Monday from the highest court in India for an immediate halt to the practice, satellite data showed over 5,000 fires that day in Punjab alone.

The states surrounding Delhi are known collectively as the "grain bowl" of India after the agricultural sector underwent a green revolution in the 1960s, leading to a dramatic increase in rice and wheat productivity. In Haryana alone, 80% of the almost 5 million hectares of land is now under cultivation, producing over 13 million tons of grain per year.

But as production grew, the sector could not keep up with an increasing demand for labor, with farmers eventually abandoning hand harvesting in favor of less labor-intensive methods such as the combine harvester.

Unlike manual harvesting techniques however, combine harvesters leave behind rice stubble, which prevents machines from sowing wheat seeds. With as little as 10 days between rice harvesting season and the sowing of wheat, farmers often turn to stubble burning to quickly remove the remaining rice crop residue.

"To hire laborers in a 5 million hectare area at one time within 10 days is not possible," explains Dr ML Jat, Principal Scientist at the International Maize and Wheat Improvement Centre (CIMMYT), which has a research center in Karnal, Haryana.

With one ton of residue containing 4-6 kg of nitrogen, 1-2 kg of phosphorus, and 15-20 kg of potassium, CIMMYT's research has shown that residue burning not only releases toxic gases into the air, but also reduces soil nutrition and therefore crop yields.

Burning the residue "means you are burning a lot of nutrients, basically," says Dr Jat.

He argues that India now needs to undergo a second, "evergreen" revolution, driven by technology such as the happy seeder, a machine which allows wheat to be sown on top of rice stubble, and the super sms (straw management system), a machine which attaches to the rear of a combine harvester to cut and spread loose residue across the field.

CIMMYT studies show that agricultural productivity can be improved with the use of happy seeders and super sms machines by between 10 and 15%, by reducing labor costs and time and allowing nutrients from the crop residue to be recycled back into the soil. Dr Jat sees it as a win-win situation: "On one side you are increasing your productivity with the happy seeder," he says, "And on the other you are saving your resources.”

Although the technology itself is not new, it was up until recently prohibitively expensive, with a happy seeder costing around 150,000 INR (almost €2,000). With around 80% of farmers in Haryana owning under 5 acres of land, the majority cannot afford to invest.

Now, however, a central government scheme is investing over 11b INR (€140 million) in three states over a two-year period, with the aim of reducing crop residue burning by providing subsidies to farmers buying the machines. Organizations like CIMMYT are working alongside state governments to train farmers and promote the new technology, in an attempt to both increase grain productivity and reduce economic and labor inputs required by the farmers.

Vikas Chaudhary, 39, a beneficiary of the plan who owns 14 hectares of land just outside Karnal, Haryana, says that his input cost has decreased from 3-4 thousand rupees per acre to just over 1,000 since he started using the happy seeder.

"Everyone said I was a mad farmer, I will never get a good yield with the field full of straw," Chaudhary says. "But I am very happy. I am saving time and energy."

'Without the machines, you cannot stop it'

Although the number of happy seeders has increased from just 100 to around 10,000 within the past decade, the machines are still only used on 20% of the land cultivated each year. In the rest of the region, stubble burning persists.

"We are trying to stop the stubble burning, but it takes time," Dr Jat explains. ”In two years, we cannot stop this residue burning in a 5m hectare area."

He worries about what will happen when the government funding ends next year, and farmers are left without subsidies to buy the new machinery.

With the pollution crisis increasing year-on-year however, investment in agricultural technology is becoming more of a priority for governments and NGOs.

"If the funding comes again, then we can reduce the stubble burning in a significant area," Dr Jat says. "Because you need the machines. Without the machines you cannot stop it."