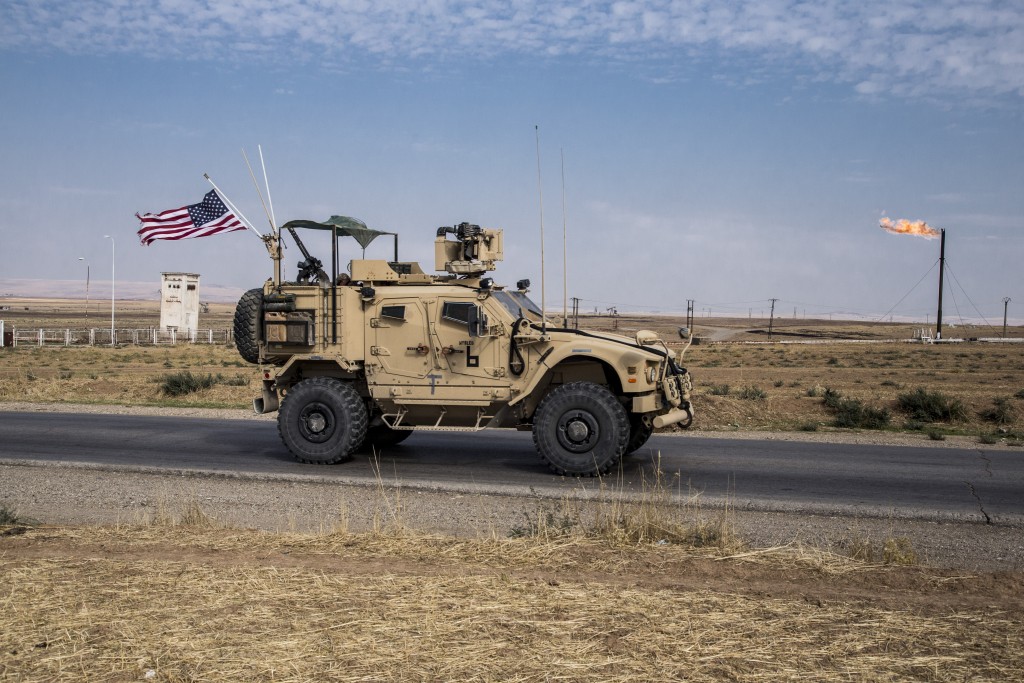 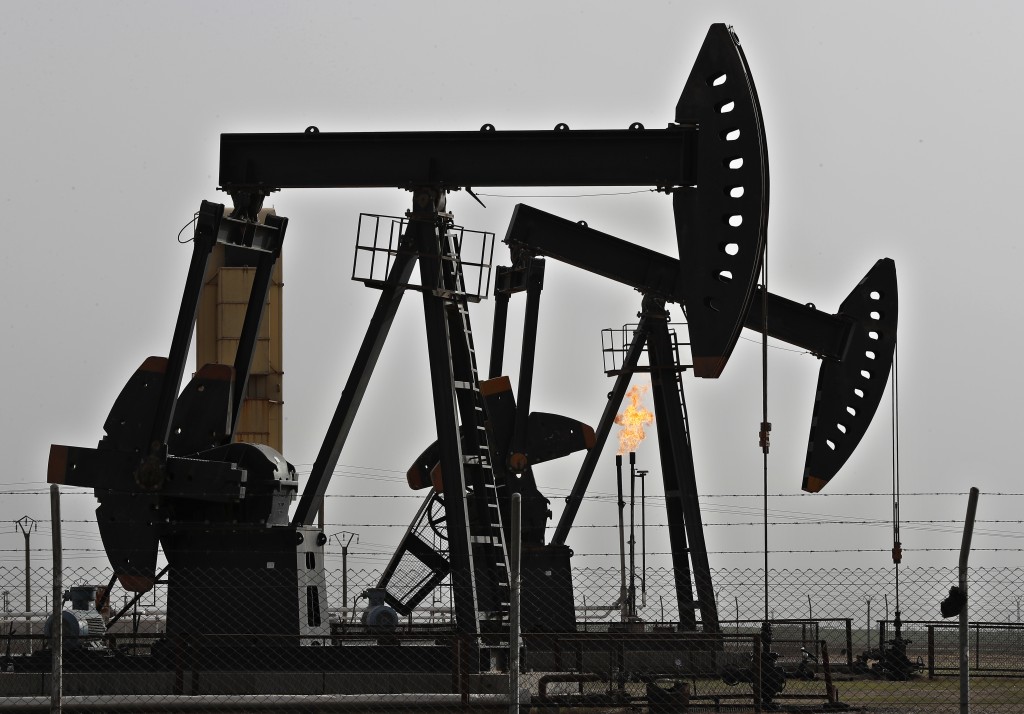 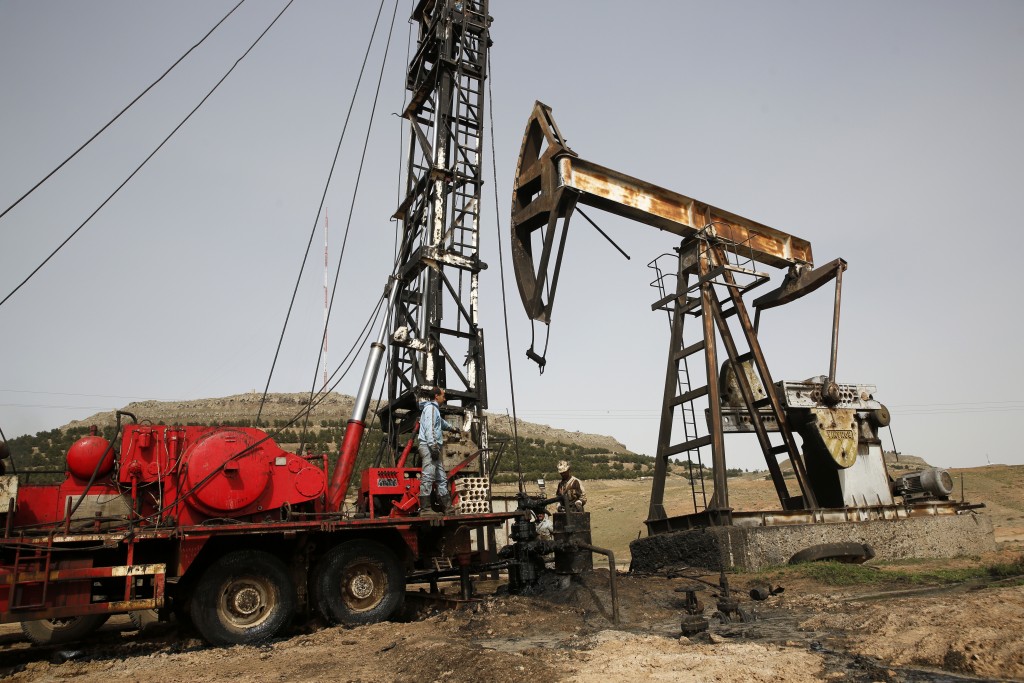 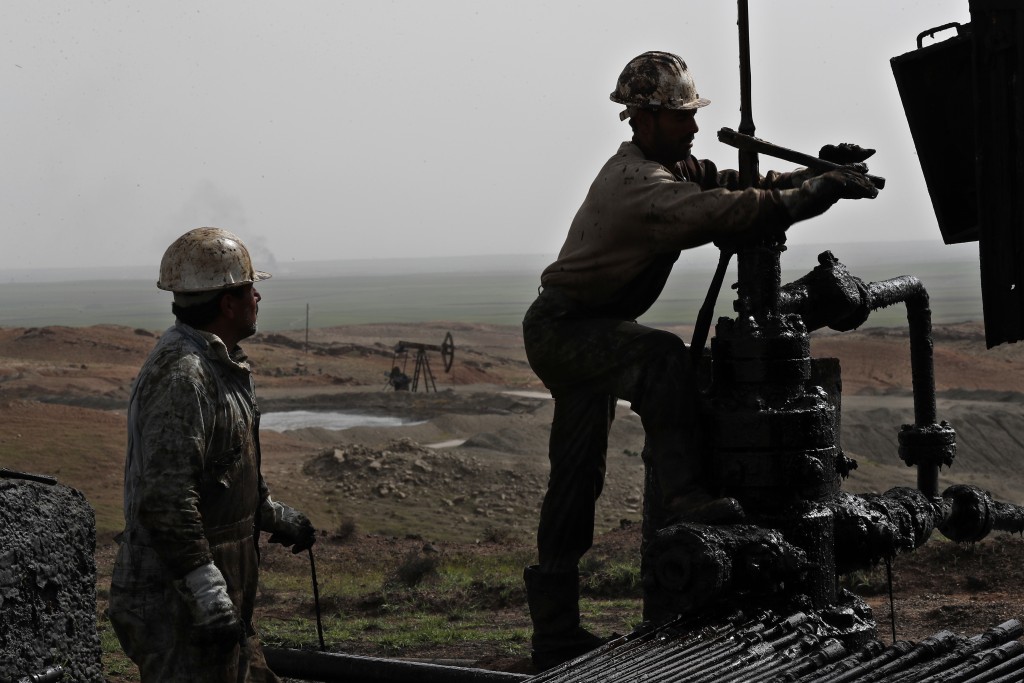 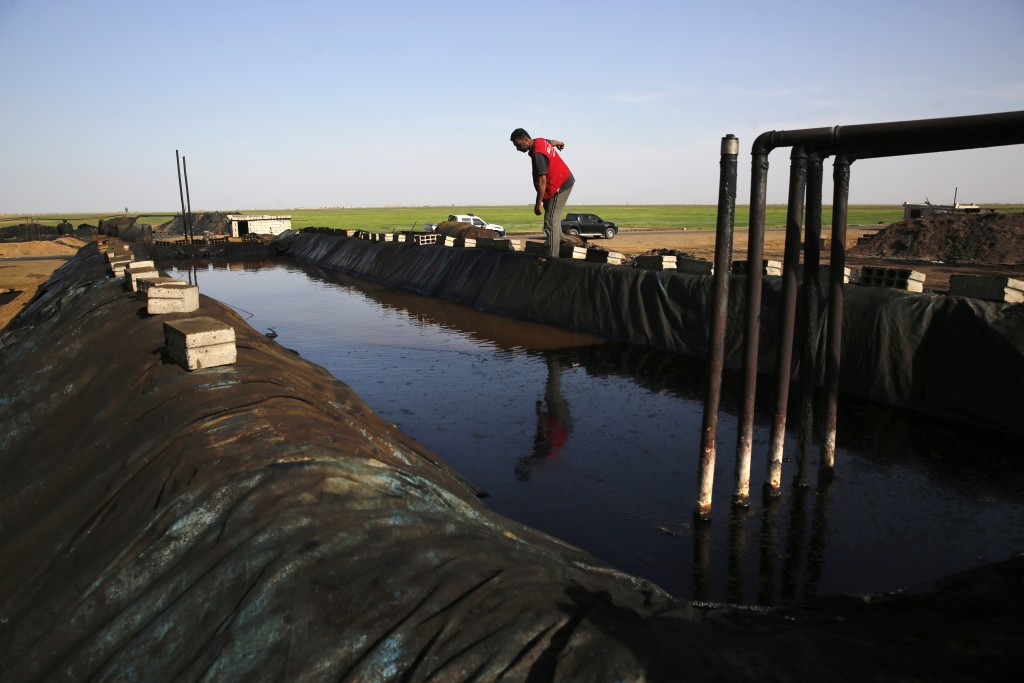 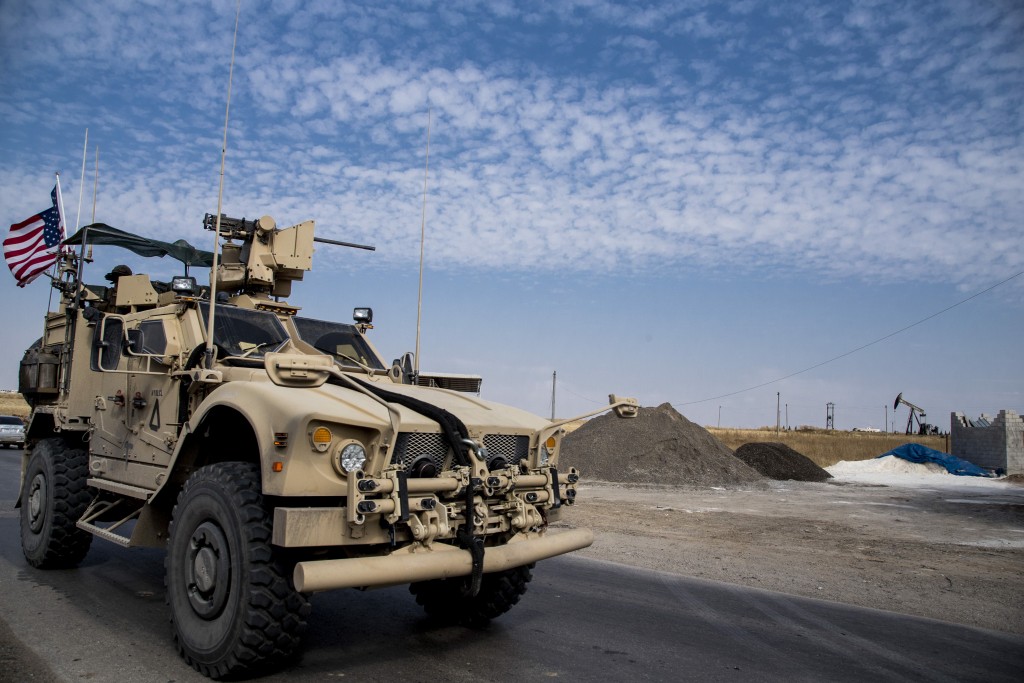 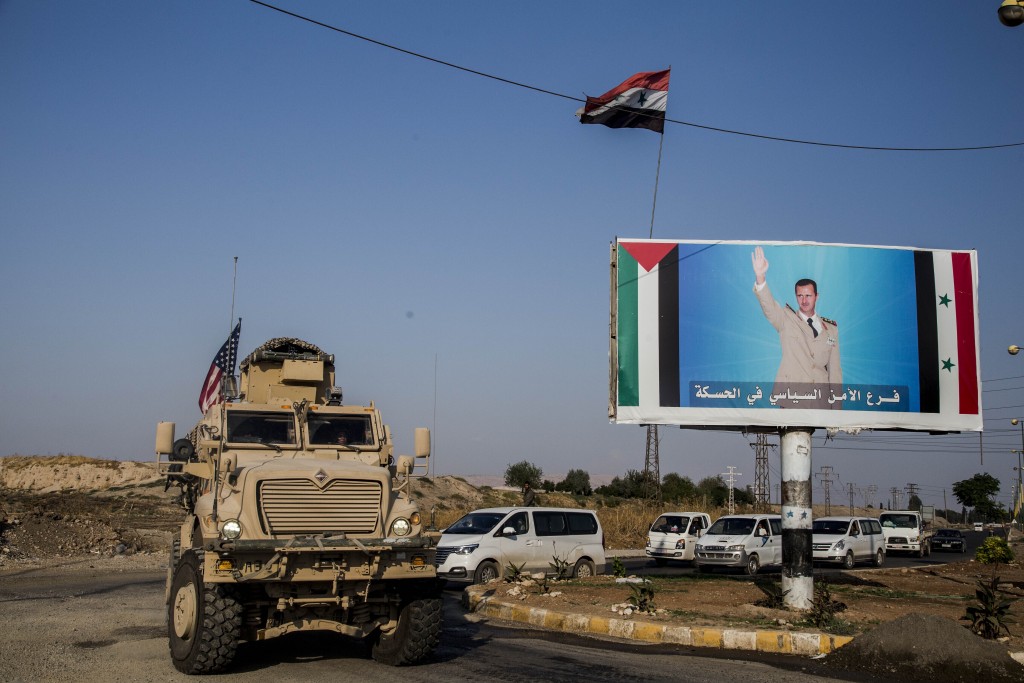 BEIRUT (AP) — As U.S. troops beef up in eastern Syria to protect oil fields, residents hope their mission will bring stability and prosperity to the remote and resource-rich region —and keep the Syrian government out.

Their hopes reflect the expectations being piled onto the operation, even as President Donald Trump flip-flopped on the scope and duration of troops deployment. He initially ordered all troops out of Syria last month, then decided to keep a force in place to hold the oil infrastructure.

That keeps the U.S. troops in the middle of eastern Syria's complex political geography, rich in oil and gas and packed with Turkish, Kurdish, Russian, Syrian and Iranian-backed troops.

The stretches of Syria east of the Euphrates, where the oil is located, have been lost to the government of Syrian President Bashar Assad for most of the country's eight-year civil war.

Its mostly Arab population is opposed to Assad, angry with years of neglect that impoverished the area despite its resource wealth. Since U.S.-backed Kurdish-led forces drove out the Islamic State group, it has been governed by a Kurdish-led administration.

So when Turkey invaded northeastern Syria last month, hundreds of residents of towns and villages east of the Euphrates held angry protests — not against Ankara but against the Syrian government and its Iranian allies. They feared the invasion would empower Damascus to send troops to their areas and restore control.

Residents welcomed Trump's latest decision, believing it a shield that would bring investments and an economic boom.

"Good things are coming," said Shehab, a 20-year-old who works as a herder and farmer in a small town in Deir el-Zour province, home to the largest oil fields.

"Deir el-Zour lives on a sea of oil. We are optimistic that if the U.S. takes over the fields, they will bring in (new) companies and expertise," Shehab said. "The unemployed will find jobs." He declined to give his last name for security reasons.

It is still early to see if Washington plans to act on Trump's promises to bring in U.S. companies to modernize the oil fields. He said he intends to make a deal with an "Exxon Mobil or one of our great companies to go in there and do it properly."

Syria's oil reserves, strategically located along transit routes, are modest, estimated in 2011 at around 2.5 billion barrels. Production shrunk from a peak of 380,000 barrels a day to an estimated 80,000 now. Currently, the Kurdish-led administration sells the oil on the local market or through smuggling it to the Syrian government, but it has not had the resources to develop the fields.

The new U.S. mission blocks Damascus' plans to regain the east and Iran's efforts to complete a land corridor through Iraq, Syria and Lebanon. Iran's ability to project power and potentially transport advanced weaponry all the way to Israel's doorstep has long been a major U.S. concern.

"Iran is the real danger," said Omar Abu Layla, a native of Deir el-Zour who lives in Europe and runs an activist collective called Deir Ezzor 24 that monitors developments in the area.

Abu Layla said he met last week with Joel Rayburn, U.S. special envoy for Syria, who expressed support for the protests and an understanding for concerns about Iran's threat to the area.

"We anticipate this area will be very, very important," Abu Layla said.

U.S. troops, including mechanized armored vehicles used for the first time in Syria, are deploying in bases in Hassakeh and Deir el-Zour provinces. In one case, U.S. troops arrived in a base they had evacuated only days before in Hassakeh, according to the Syrian Observatory for Human Rights, a war monitor group. The Pentagon will not say how many forces will remain in Syria, but officials have suggested they could number at least 800.

When the U.S. forces withdrew from the north, the Kurds — seeking protection from their No. 1 enemy Turkey — invited in the Syrian government and Russia. Assad's forces walked back into parts of northeastern Syria where they had not set foot in years. More are now deploying along large parts of the border region under a Russian-Turkish deal while joint Turkish-Russian patrols monitor the withdrawal of the Kurdish-led forces.

While Kurdish-led forces fight side by side with government troops against continued Turkish incursions, the same force remains the main partner of the U.S in its new mission.

Arabs have been part of the Kurdish-led force and hope to play a bigger role in the new U.S. mission in the areas they dominated.

The force's Kurdish commander, Mazloum Abdi, said the American troops will work "in coordination with our forces" and would continue in operations against IS remnants and in training Kurdish-led forces.

"The main reason behind (the U.S. presence) is definitely not oil. Everyone knows that the U.S. does not need the oil," he said in an interview aired Wednesday.

Hassan Hassan, a Syria and terrorism expert with Washington-based think tank Global Policy, said the new mission is "a recalibration of the previous plan, currently focused on Iran and the (Syrian) regime."

It is not, however, "part of a thought-out and politically sustainable strategy," he said. "The risk is that Trump will order a sudden withdrawal when something goes south."

In a subtle hint, Assad said in an interview last week his forces are no match for the U.S. forces but their presence may spark "popular resistance," likening it to what happened in Iraq before the U.S. withdrawal in 2011.

Residents of the east are already wary of the forces of Assad and his Iranian-backed allies, deployed just across the Euphrates.

Reports have been circulating among locals that government troops were massing and Iranian-backed militias arriving from Iraq. Kurdish-led forces and government troops clashed Tuesday near the town of Husseiniya, the Observatory and Deir Ezzor 24 reported.

The Observatory said the clashes prompted the U.S. military to fire rockets at the government forces. The U.S.-led coalition denied firing but the reports underscored the possibility of frictions.

The fears sent prices of basic goods shooting up as people began to horde. Many considered fleeing, said Shehab, who lost his home west of the Euphrates when government forces moved in two years ago, forcing him to flee. Iranian-backed militias are recruiting and confiscating homes across the river, he said.

It was "impossible" to live under Assad again, the newlywed Shehab said. For men of fighting age like him, Damascus' rule means obligatory military service or vanishing into prisons like others suspected of opposition links.

Shehab was among hundreds who protested against that prospect. "Assad and Iran are the axis of terrorism," read one banner they touted. After a protest a week ago, Shehab said it was reassuring when U.S. armored vehicles, with American flags, drove through his town, Shuheil, in a show of support.

But what if the U.S. pulls out, as Trump has promised many times before?

"This is what is available for us now," Shehab said. "We will hang on to that until we see what God gives us."