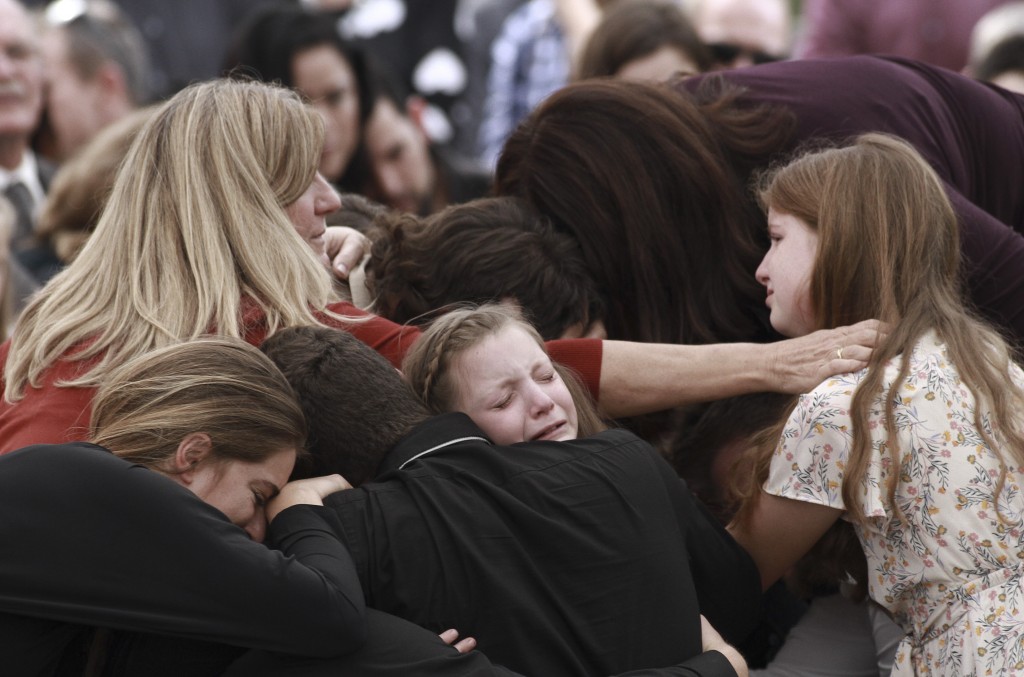 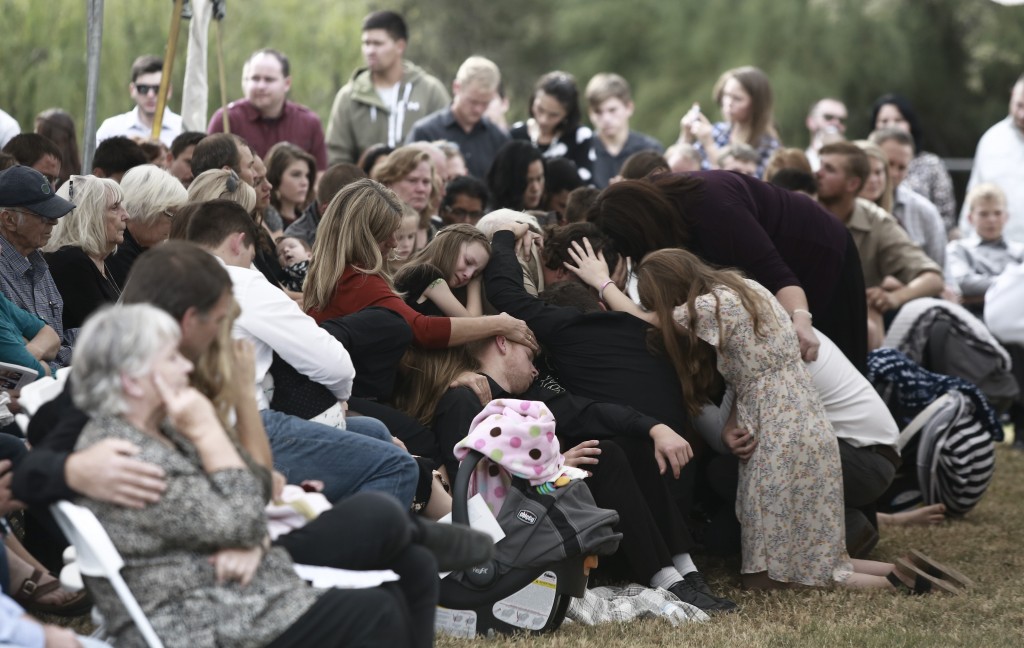 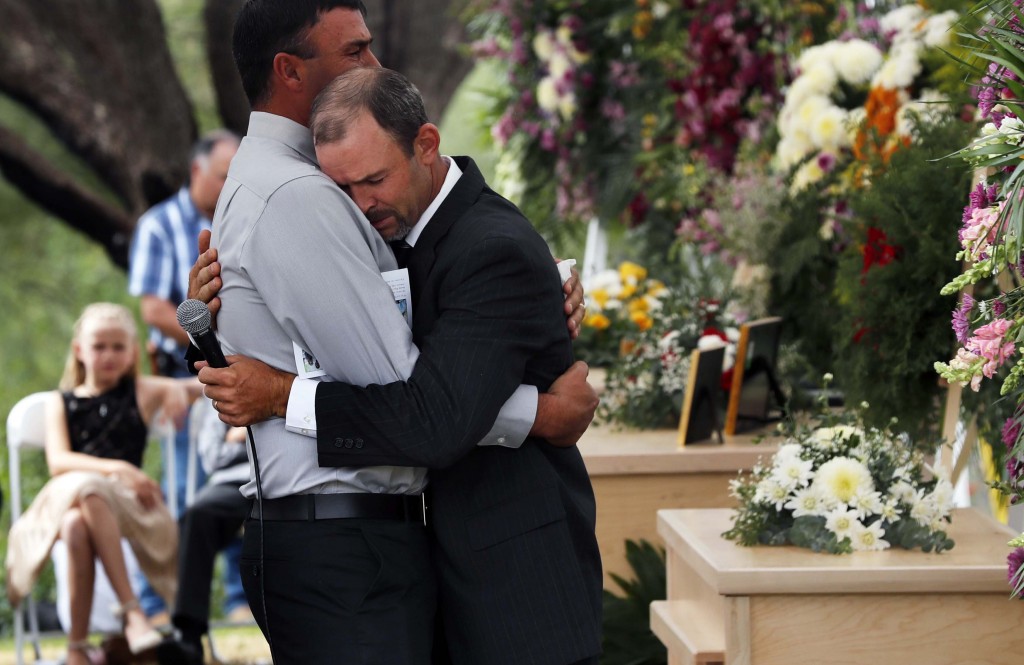 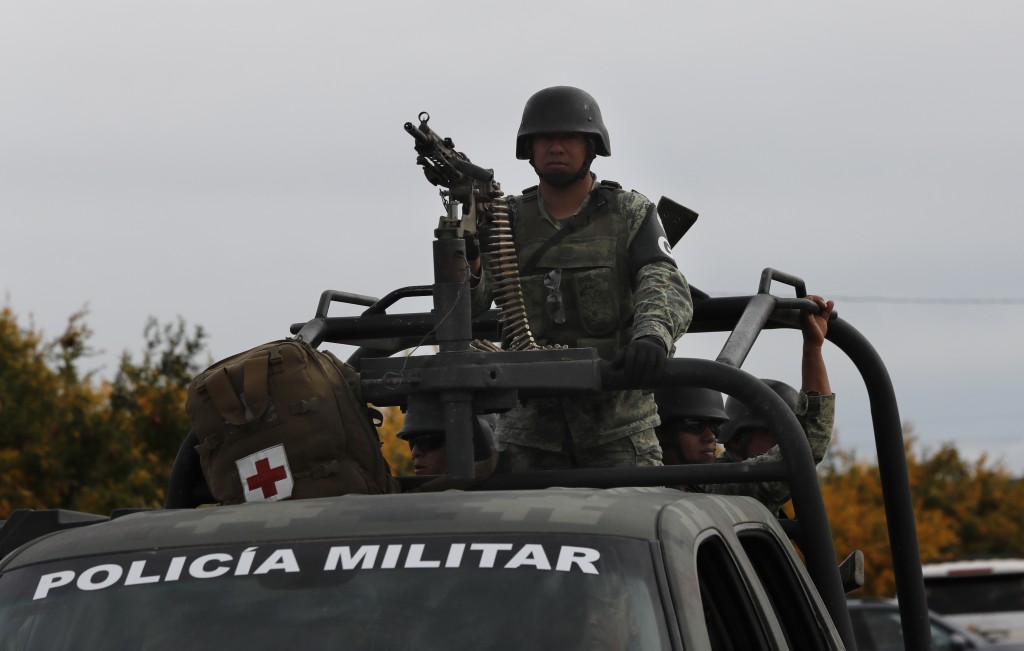 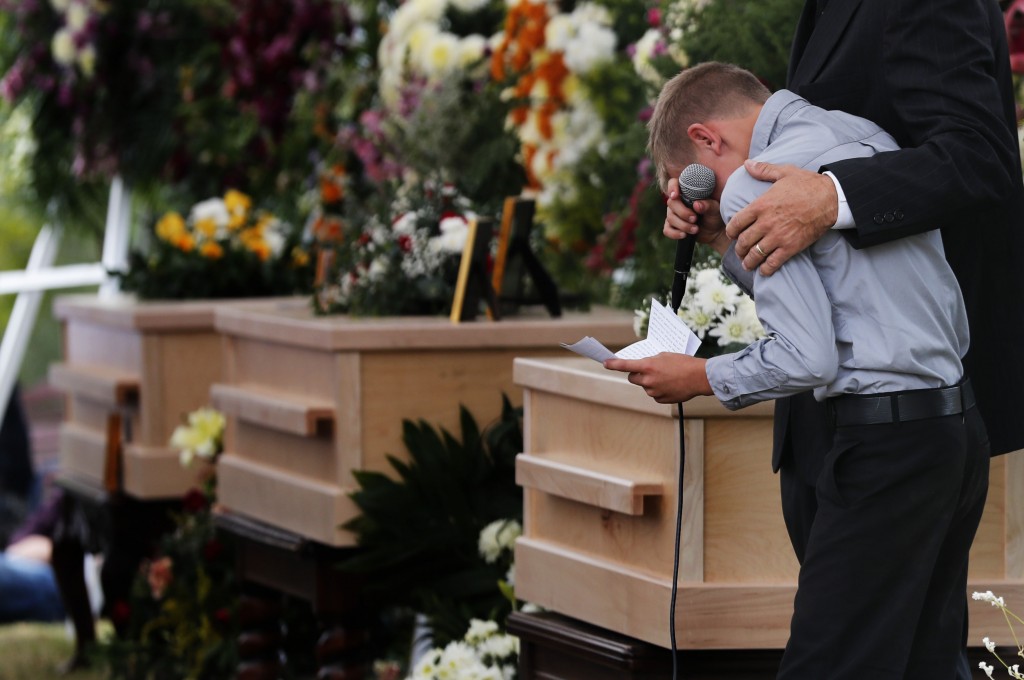 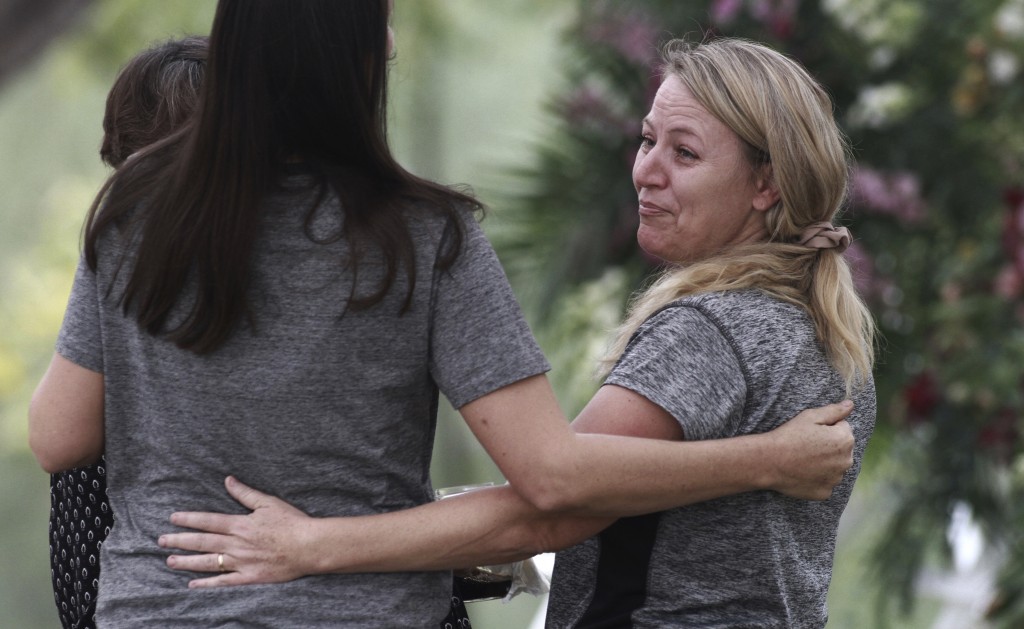 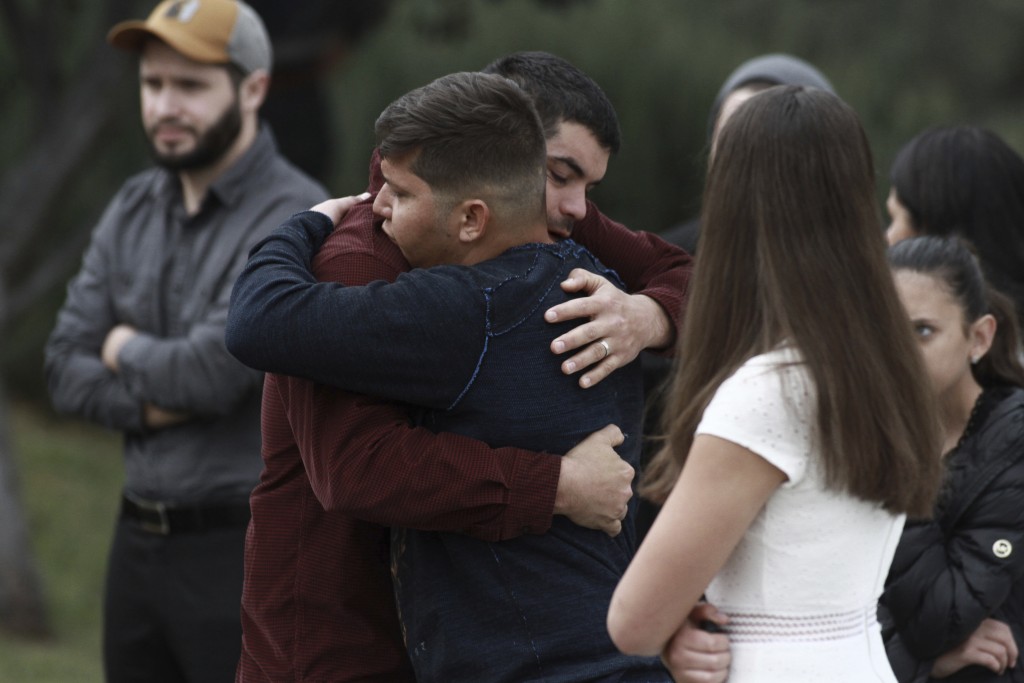 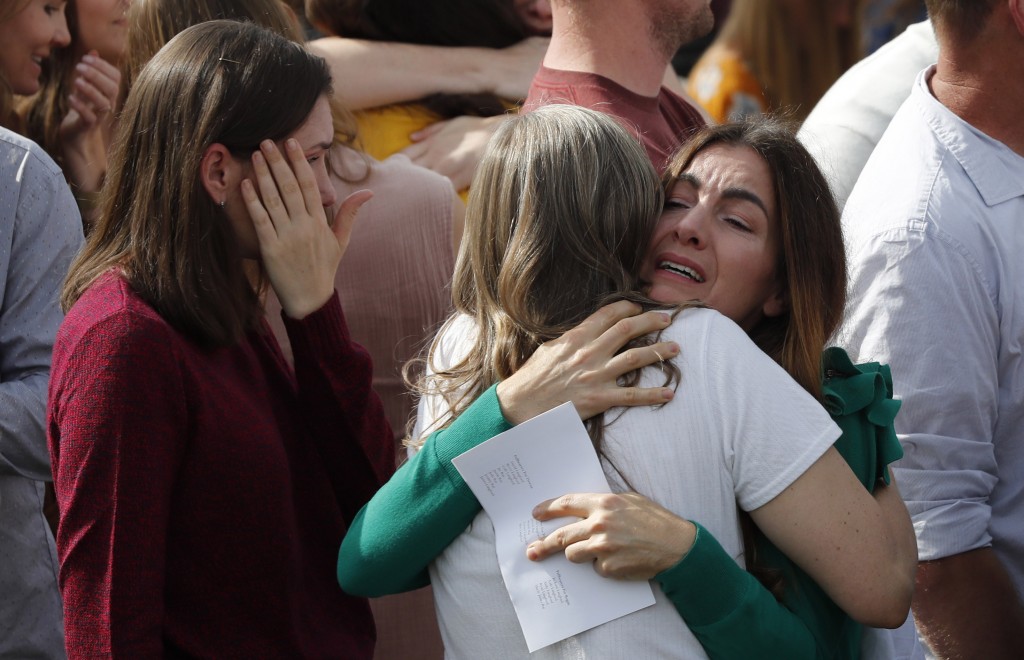 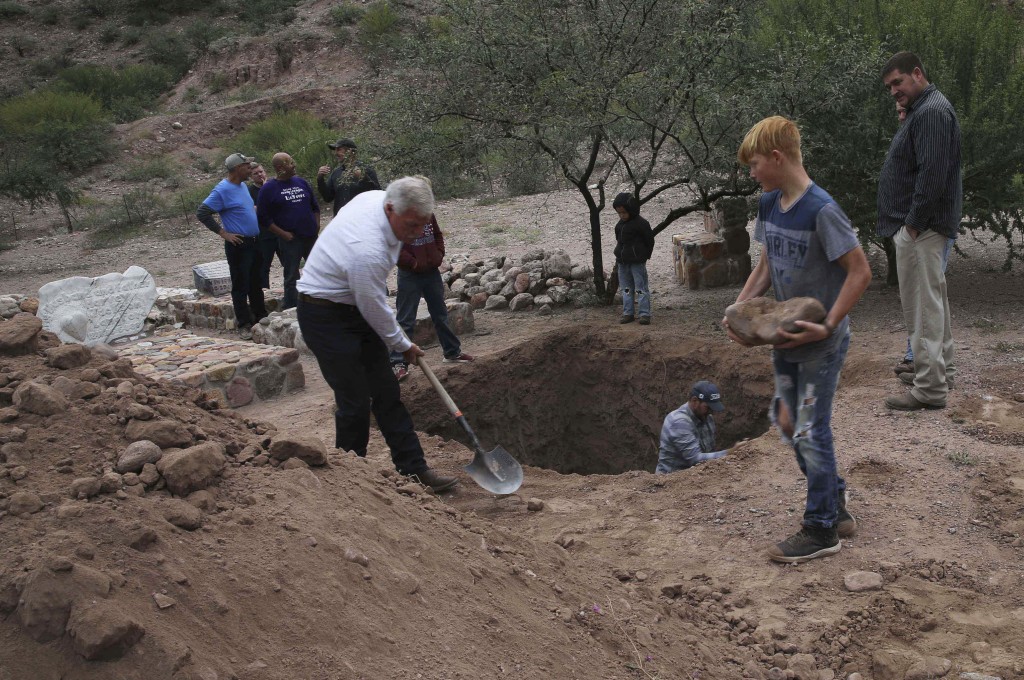 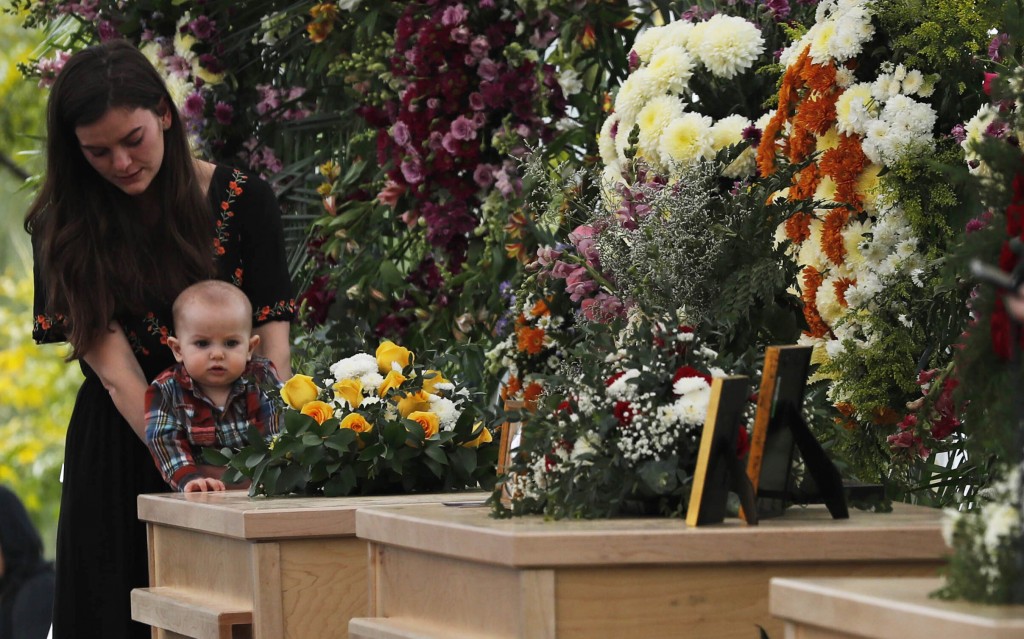 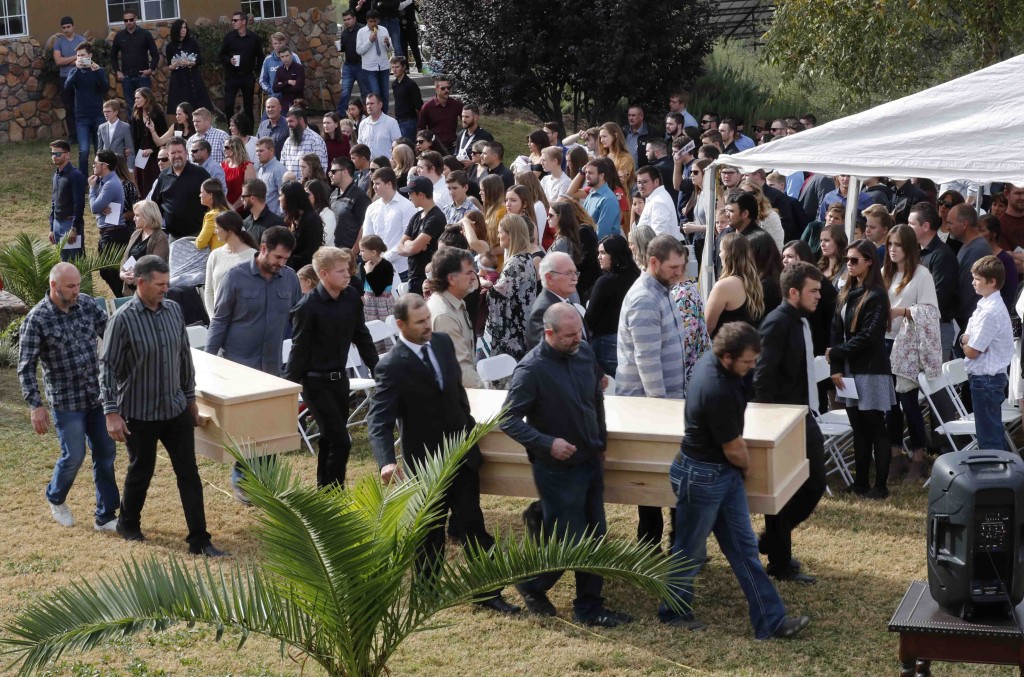 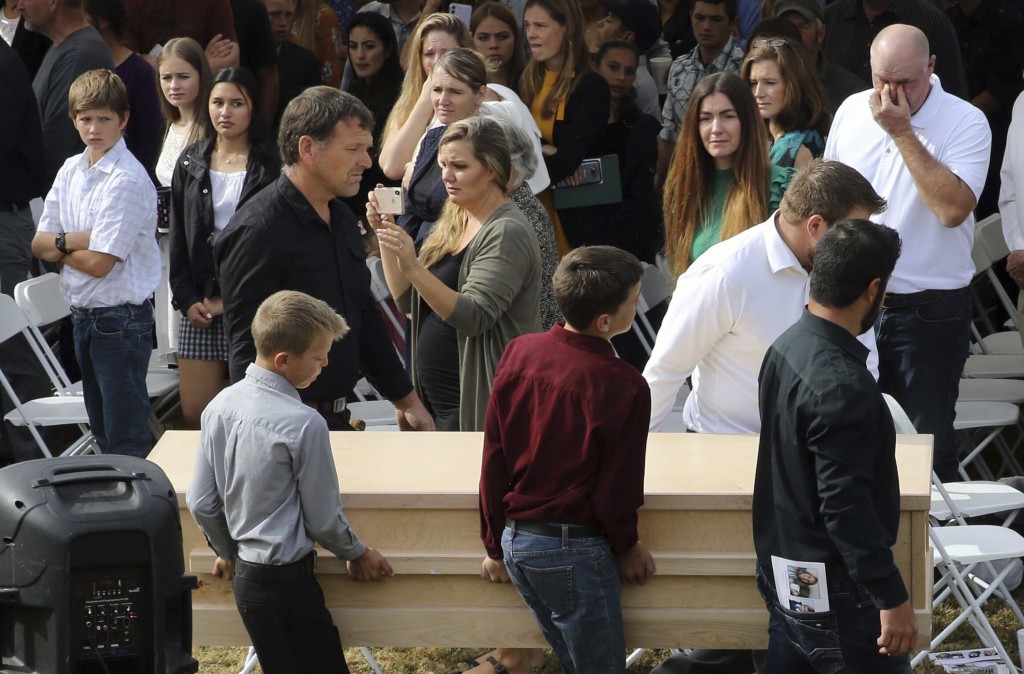 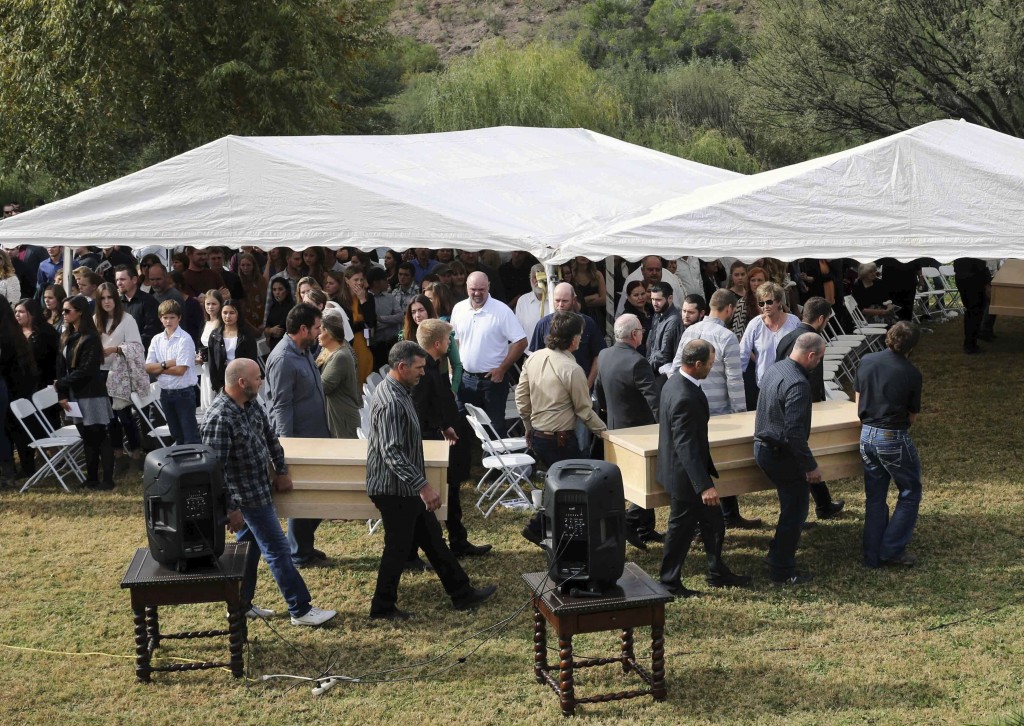 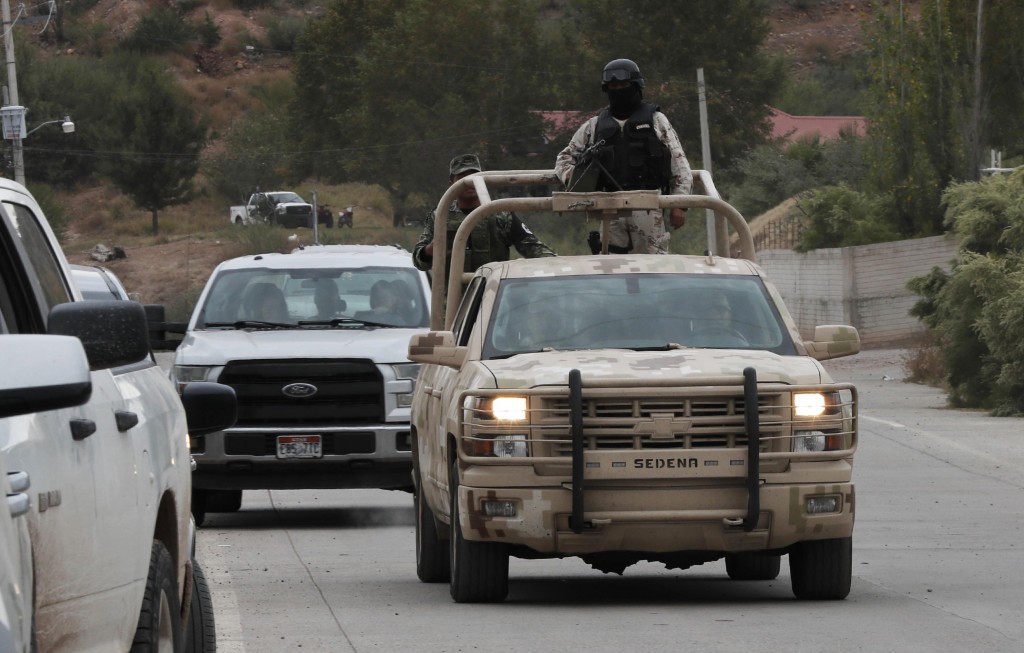 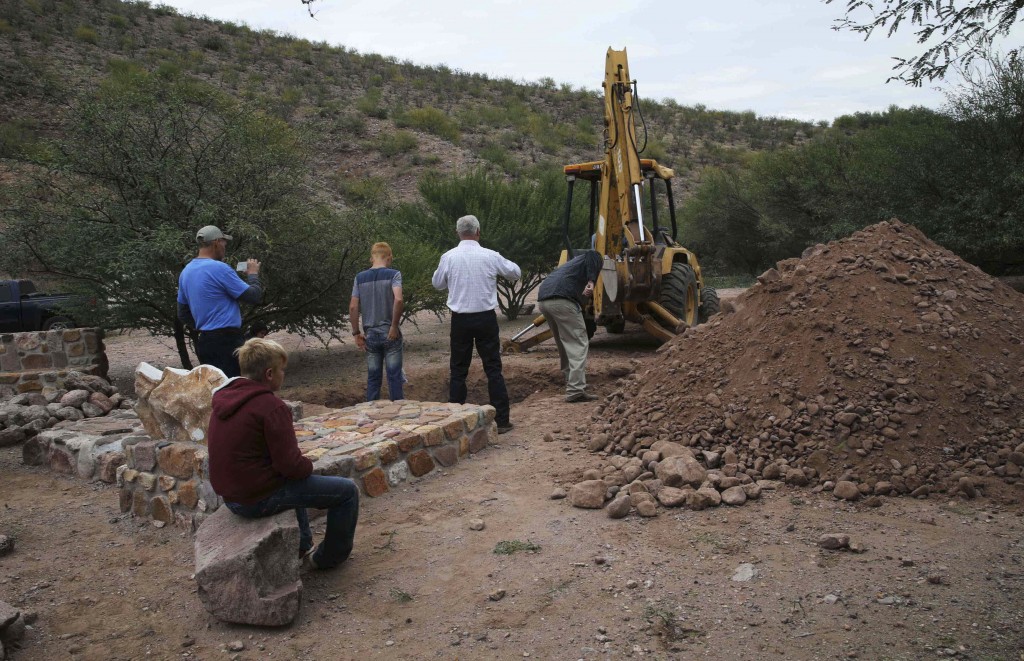 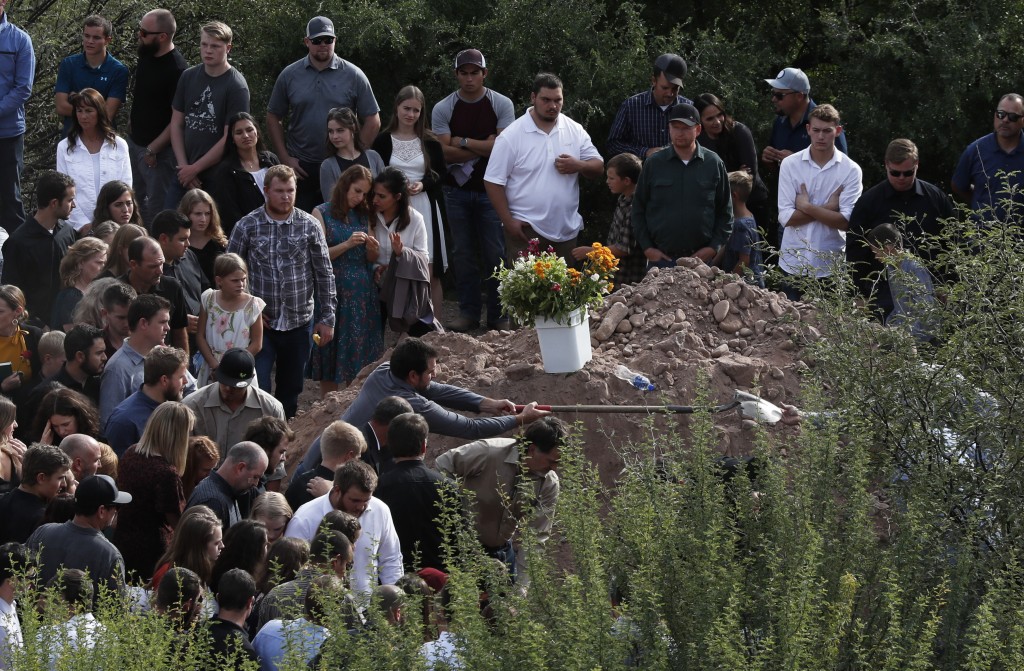 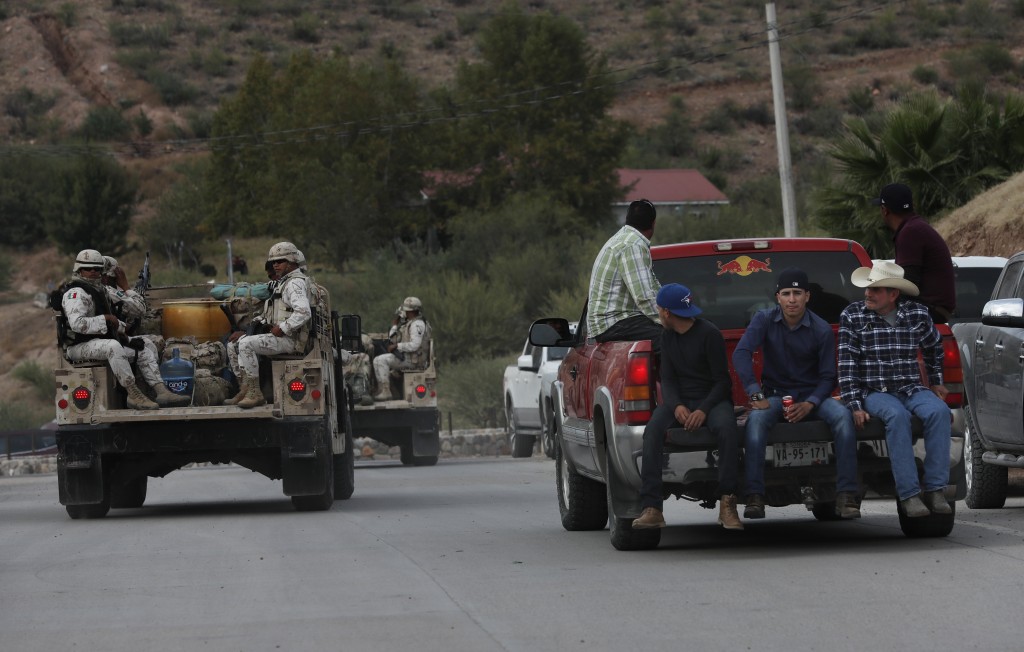 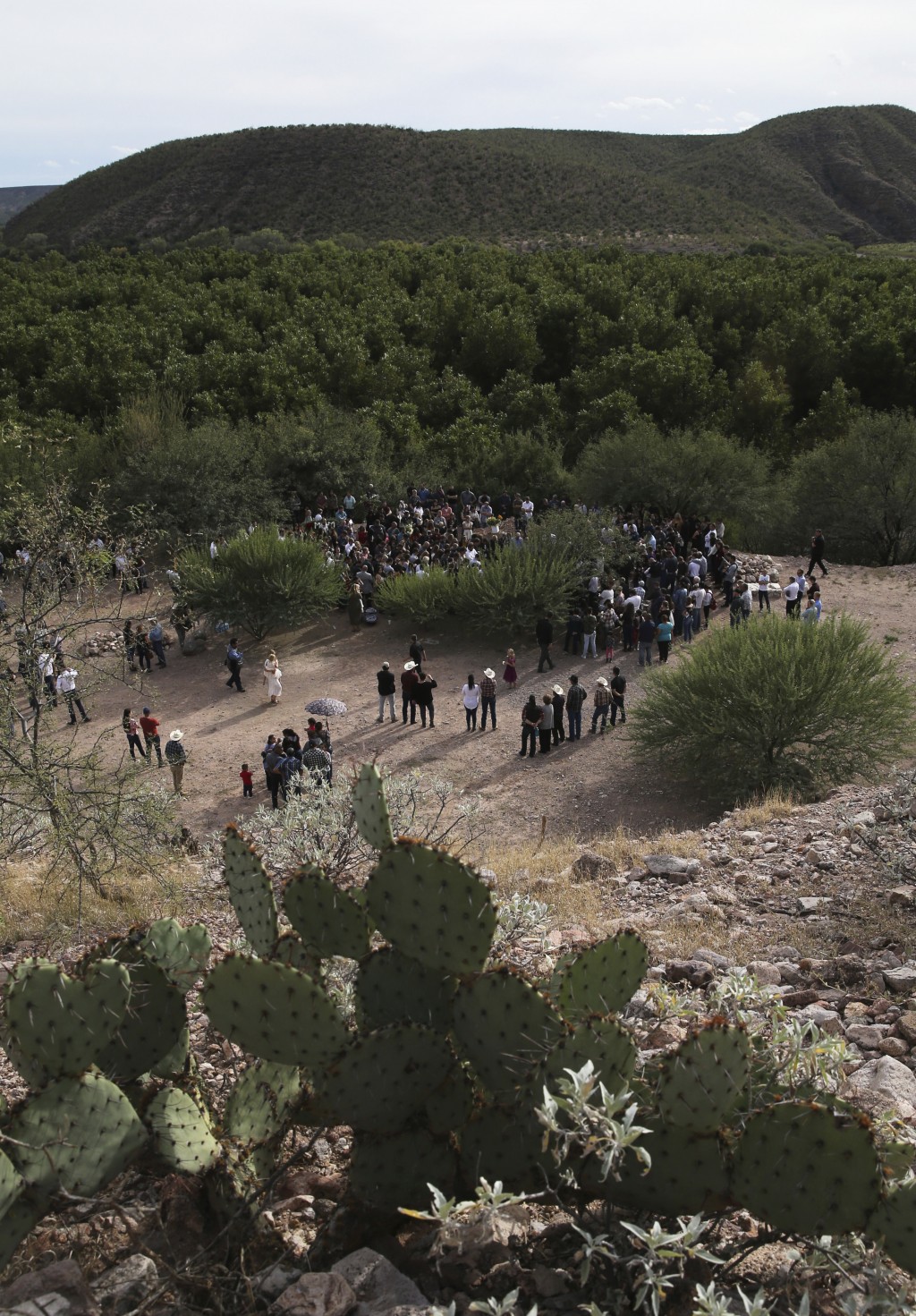 LA MORA, Mexico (AP) — After holding funerals for and burying some of the nine American women and children slain in a cartel ambush, residents of this town of about 300 are left to come to grips with the fear the attacks inspired among the tightly knit community.

"I do not feel safe here, and I won't, because the truth is we aren't safe here as a community," David Langford said between tears addressing mourners at the funeral for his wife, Dawna Ray Langford, Thursday in La Mora, whose residents consider themselves Mormon but are not affiliated with The Church of Jesus Christ of Latter-day Saints.

While the sibling community of Colonia Le Baron has been peaceful since the 2009 murder of one of its members and subsequent installation of a security base, La Mora lacks such a presence — at least until Monday's killings prompted state and federal forces to deploy to protect those who came to mourn. How long they stay could be crucial to its future.

"We here in the mountains, we have no access to authorities, or very, very little," David Langford said.

The burials Thursday took place as Mexican soldiers stood guard, a reminder of the dangers they face living amid a drug cartel turf war.

The first funeral was for a mother and two sons who were laid to rest in hand-hewn pine coffins in a single grave dug out of the rocky soil. Clad in shirt sleeves, suits or modest dresses, about 500 mourners embraced in grief under white tents. Some wept, and some sang hymns.

Members of the extended community — many of whom, like the victims, are dual U.S-Mexican citizens — had built the coffins themselves and used shovels to dig the shared grave in La Mora's small cemetery.

Mourners filed past to view the bodies and pay their final respects to Dawna Ray Langford, 43, and her sons Trevor, 11, and Rogan, 2.

They were laid to rest together, just as they died together Monday when attackers fired a hail of bullets at their SUV on a dirt road leading to another settlement, Colonia LeBaron. Six children and three women in all were killed in the attack on the convoy of three SUVs.

In a raw, tearful service, relatives recounted valiant efforts to try to rescue their loved ones after the ambush, and how some of the children walked miles out of the mountains to the town, situated about 70 miles (110 kilometers) south of the Arizona border.

There was no talk of revenge in the deeply religious community, only justice.

"God will take care of the wicked," Jay Ray, Dawna's father, said in a eulogy.

David Langford called his wife a hero for telling her children to duck as their vehicle came under fire.

"I find it hard to forgive," he said. "I usually am a very forgiving guy, but this kind of atrocity has no place in a civilized community."

"My children were brutally, brutally murdered," he said, "and my beloved wife."

Of the survivors, he said, son Cody had had a plate installed in his jaw, which was being wired shut for six weeks.

Dawna's younger sister Amber Ray, 34, eulogized her as a devoted mother to her 13 children and homemaker who loved a good laugh and baked the best birthday cakes around.

"There isn't anything in life that a cup of coffee couldn't make better," Amber said Dawna was fond of saying.

The three coffins, two of them child-size, were placed into the beds of pickup trucks, and family members rode with them to the grave, hundreds of mourners following on foot.

Later in the day, a memorial was held for Rhonita Miller and four of her children, all of whom also were murdered on the road between La Mora and Chihuahua state.

In a grassy backyard before hundreds of attendees, she was eulogized as an "innocent spirit, beautiful heart" and a woman whose laugh "could light up a room."

Son Howard Jr. loved basketball and recently was delighted to make his first three-pointer; daughter Kristal was "the apple of her daddy's eye;" twins Titus and Tiana, born March 13, were remembered as "two perfect angels in the first precious moments of their lives."

Their bodies were to be taken later across the road where they died for burial in Colonia Le Baron. The two communities, whose residents are related, drew together in a show of grief.

Patrols of Mexican army troops passed by regularly on the hamlet's only paved road.

Gunmen from the Juarez drug cartel had apparently set up the ambush as part of a turf war with the Sinaloa cartel, and the U.S. families drove into it.

Mexican officials said the attackers may have mistaken the group's large SUVs for those of a rival gang.

But Julian LeBaron, whose brother Benjamin, an anti-crime activist, was killed by cartel gunmen in 2009, disputed that.

"They had to have known that it was women and children," he said. He said the eight children who survived reported that one mother got out of her SUV and raised her hands and was gunned down anyway.

To many, the bloodshed seemed to demonstrate once more that the government has lost control over vast areas of Mexico to drug traffickers.

And it called into question President Andrés Manuel López Obrador's "hugs, not bullets" security strategy of trying to solve underlying social problems instead of battling drug cartels with military force.

"Now this place is going to become a ghost town," said Steven Langford, a former La Mora mayor whose sister Christina Langford was among the women killed. "A lot of people are going to leave."