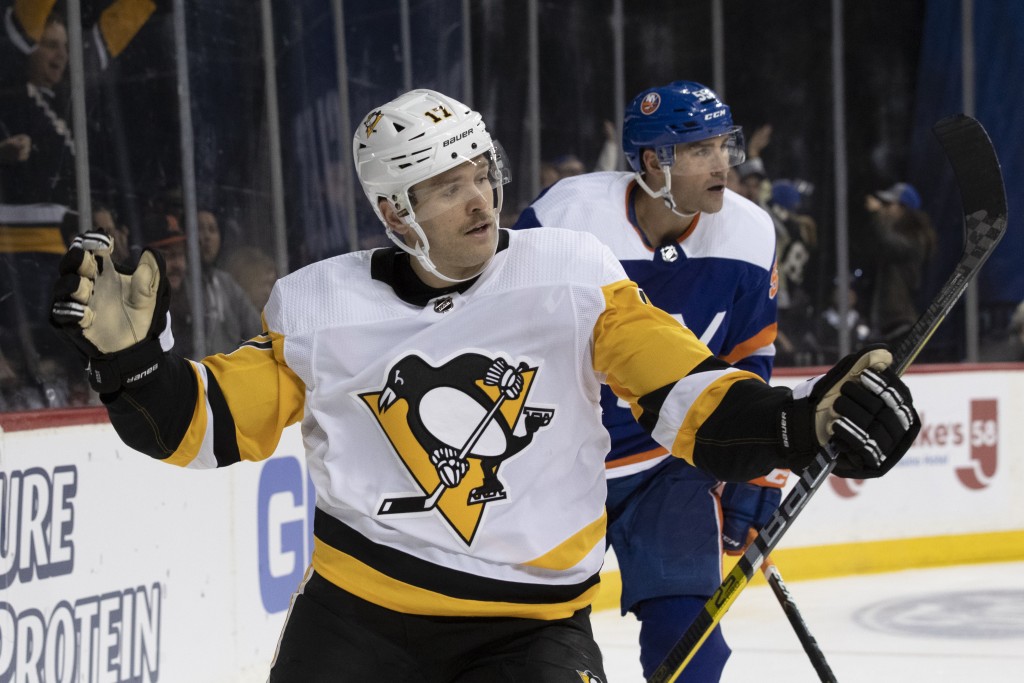 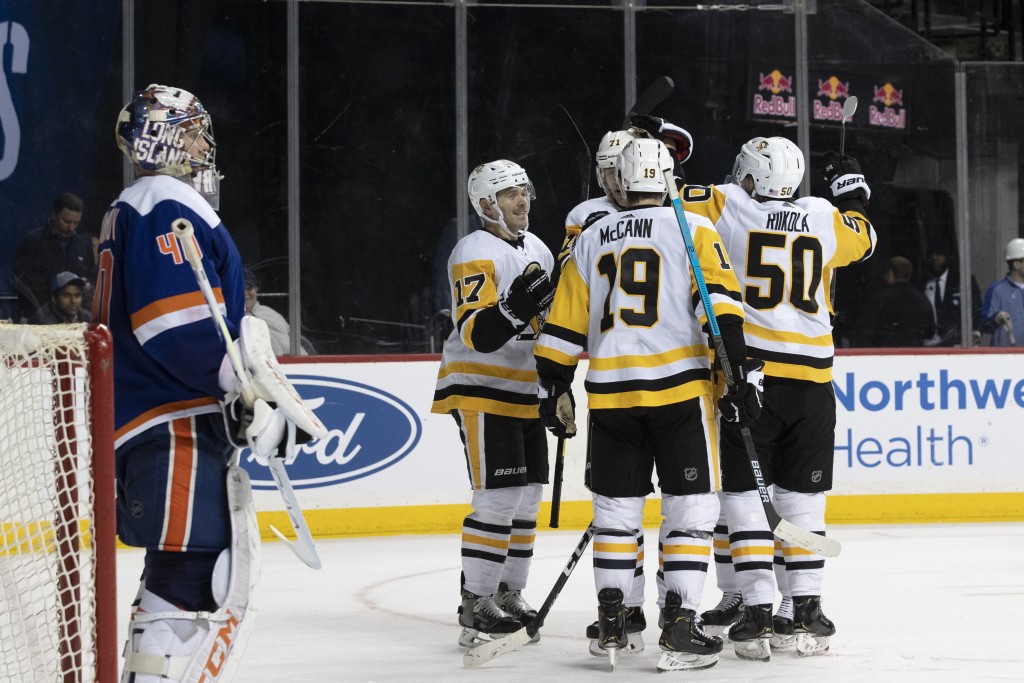 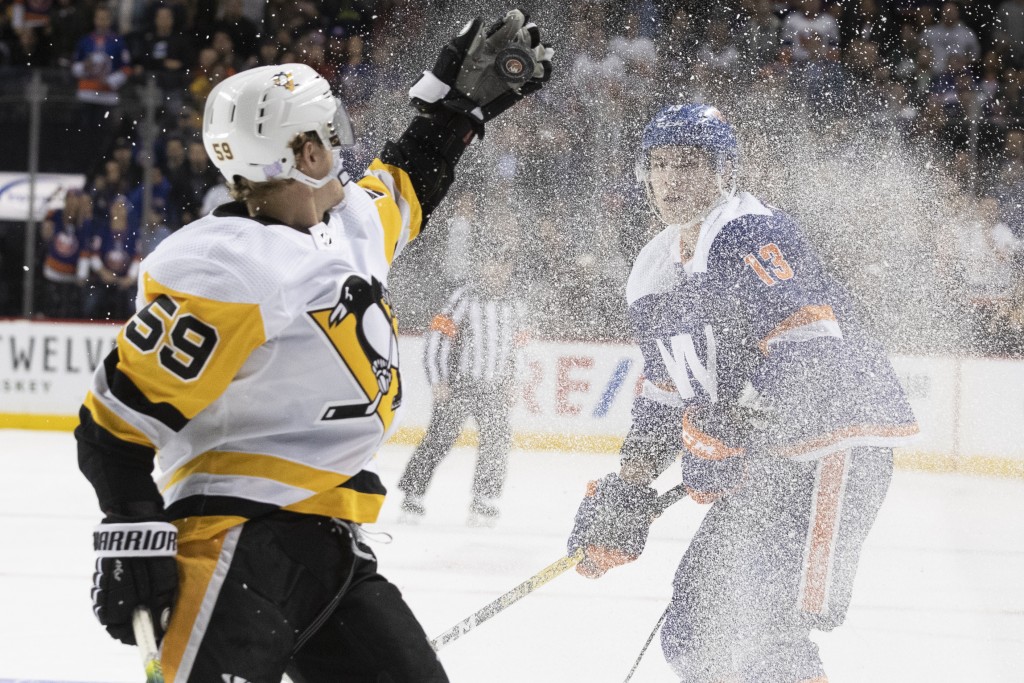 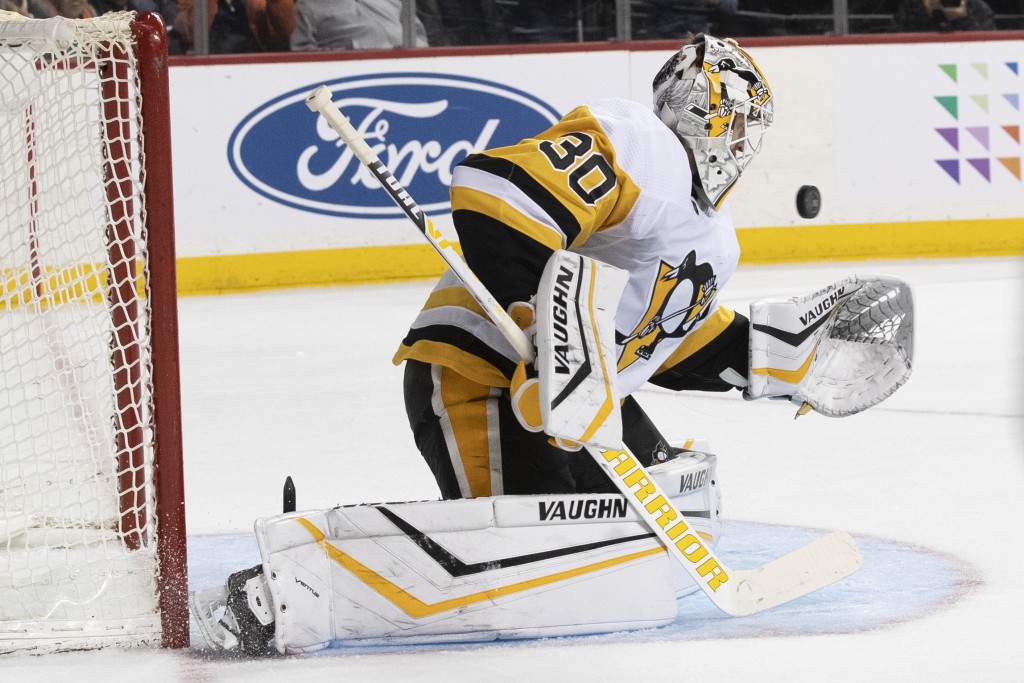 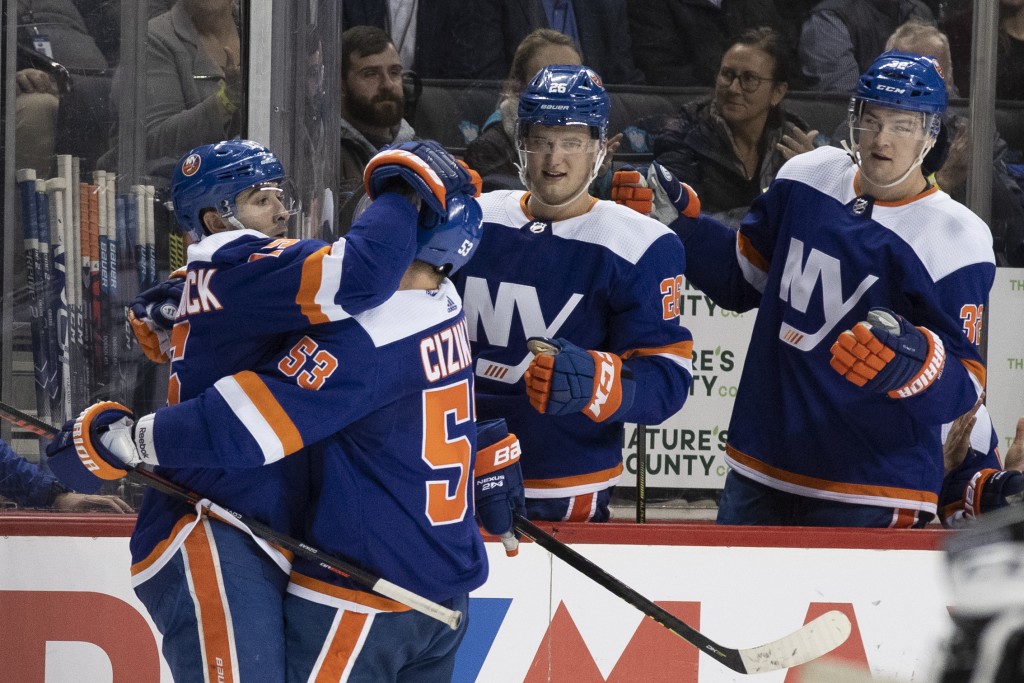 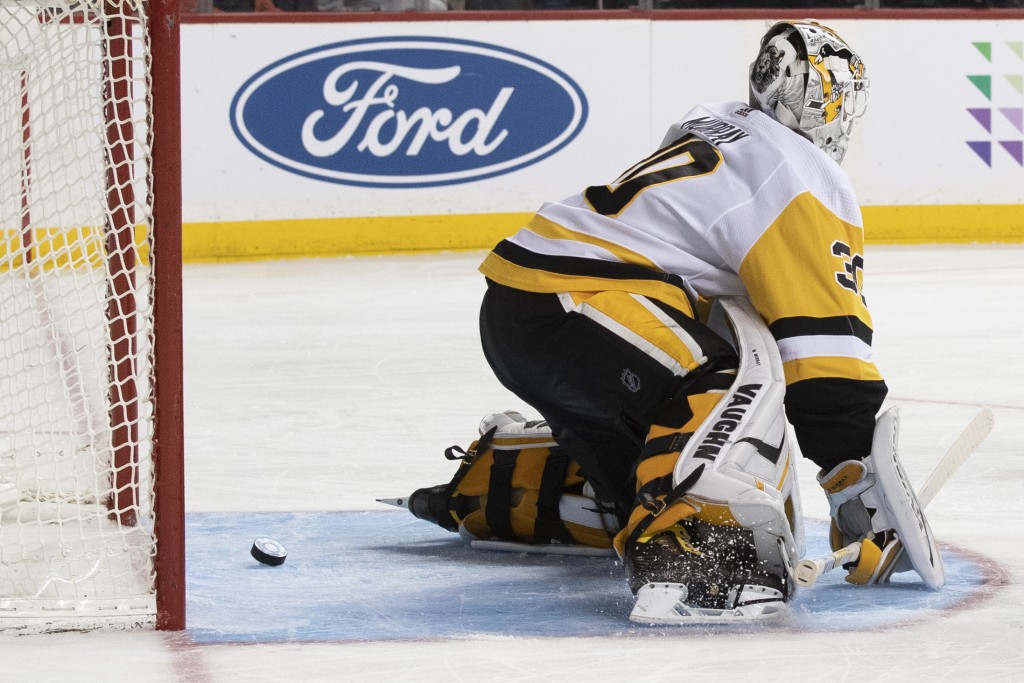 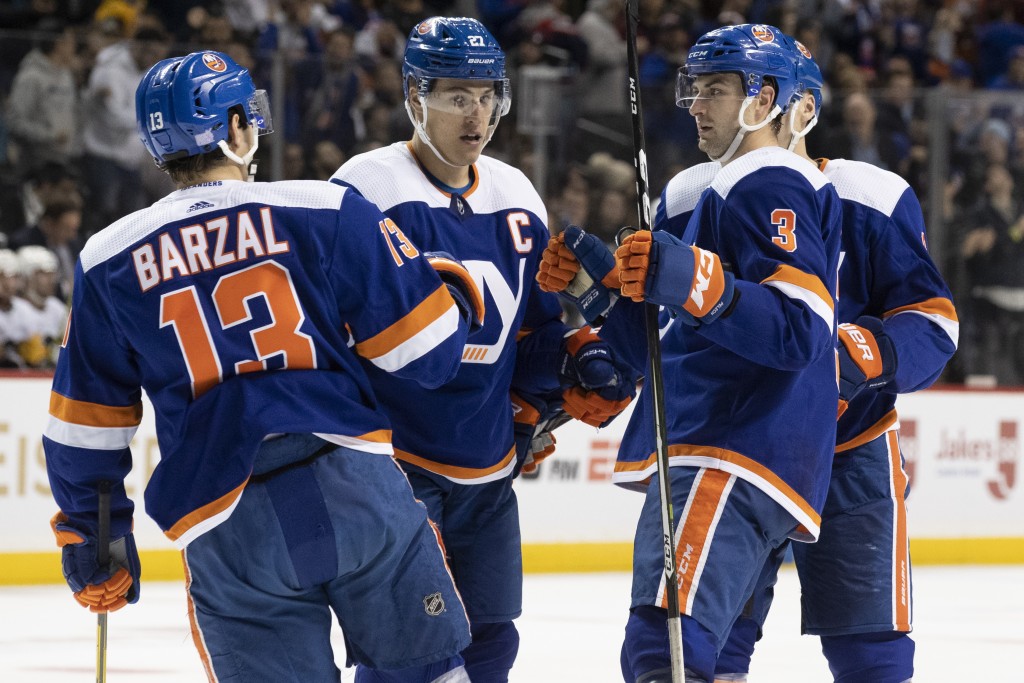 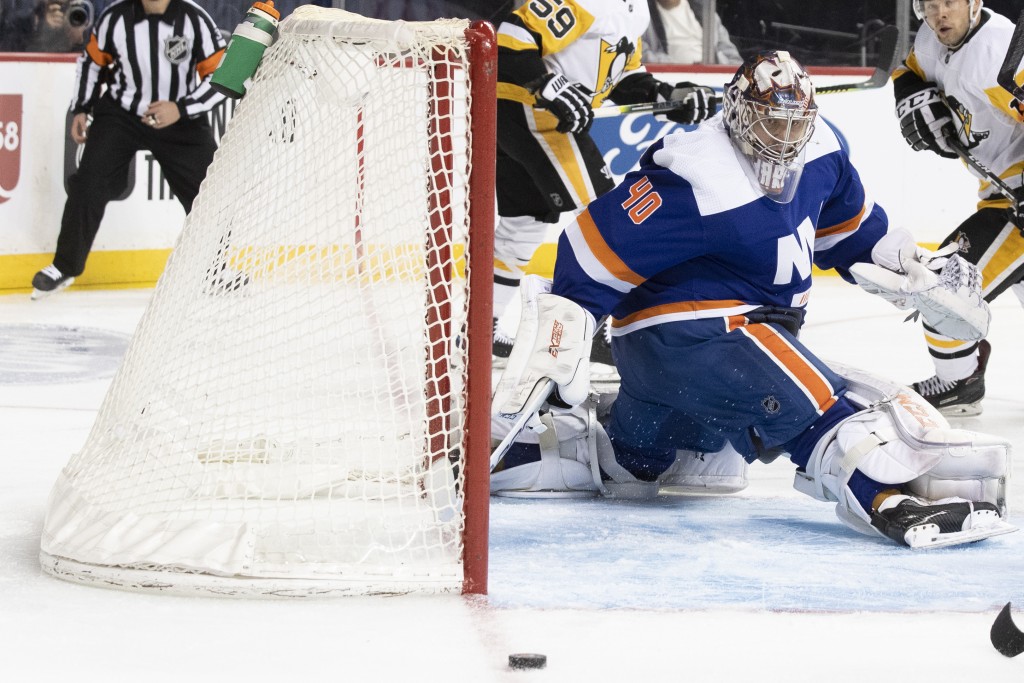 NEW YORK (AP) — Bryan Rust scored his second goal of the game in overtime and the Pittsburgh Penguins rallied past the Islanders 4-3 on Thursday night in Brooklyn to end New York's 10-game winning streak.

Pittsburgh erased a three-goal deficit in the third period and snapped its three-game skid. Jared McCann had a goal and two assists, and Evgeni Malkin also scored for the Penguins. Matt Murray made 20 saves.

Rust took the puck from Islanders center Brock Nelson behind the net and scored on a wraparound 3:25 into the extra session. Rust extended his point streak to five games.

McCann ended Varlamov's shutout bid when his wrist shot got by the goalie 1:38 into the third to spark the Penguins' comeback. Pittsburgh defensemen John Marino and Brian Dumoulin helped set up the play.

Rust and Malkin followed up McCann's goal with scores of their own as the Penguins wiped out their three-goal deficit in 7:10.

Rust snapped a wrist shot over Varlamov's glove after Murray made a sprawling save on Anthony Beauvillier's backhand at the other end. McCann and Malkin assisted on the goal.

Malkin tied it 3-all at 8:48 when he swatted home a long rebound. It was his second goal of the season in five games. Juuso Riikola and McCann assisted.

Cizikas opened the scoring when he sneaked a backhand past Murray just 19 seconds into the game. Michael Dal Colle deflected the puck behind the net, and Cizikas beat a confused Murray to the far post. Dal Colle and Ryan Pulock got assists.

Clutterbuck scored short-handed for the second straight game at 6:28 of the second period when his wrist shot whizzed between Murray's pads to give New York a 2-0 advantage. The Islanders have killed off 24 of 25 penalties over the past eight games.

Pelech stepped into a slap shot at 9:26 of the second to make it 3-0. The original shot was deflected by Penguins forward Teddy Blueger while Anders Lee provided a screen at the top of the crease. Lee and Mathew Barzal assisted.

NOTES: Pittsburgh played without defenseman Kris Letang, who sustained a lower-body injury in the third period of a 6-4 loss at Boston on Monday. ... Islanders defenseman Nick Leddy missed his third straight game while nursing a lower-body injury and is day-to-day. ... Lee has played in 215 consecutive games. . New York recalled Seth Helgeson and Otto Koivula from Bridgeport of the AHL, but neither dressed. . Dominik Simon's four-game point streak against the Islanders ended. . The Penguins scratched forward Sam Lafferty and defenseman Chad Ruhwedel.