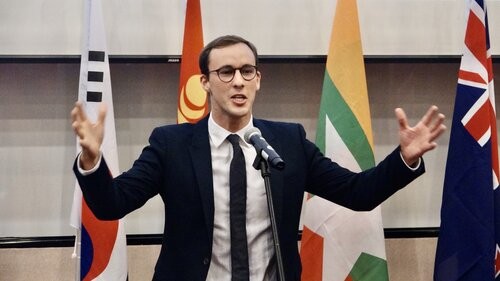 A language program student from New Zealand on Thursday won the top prize in a Mandarin public speaking contest in Taipei where foreign nationals described their experiences in Taiwan or shared other personal viewpoints in Mandarin Chinese.

Samuel Chetwin George, one of the 64 contestants and a Mandarin Chinese language student enrolled in National Taiwan University's International Chinese Language Program, won the first prize with a speech about using humor to resolve an embarrassing situation.


George took the audience through a scenario where he resorted to making fun of himself during an embarrassing moment to create laughter and defuse an awkward situation.

George, who started learning Mandarin in September last year, told CNA that he was born in Hong Kong and grew up in New Zealand where there is a large Chinese immigrant population.

"I'm from New Zealand, and there is a big population of Chinese -- mainland -- Taiwanese, Hong Kong families there, so I have always been really curious (about the language)," he said. "Beyond just the interest of learning a really fascinating language, I think it will be really useful."

Moving forward, he will continue his post-graduate studies in East Asian studies at Stanford University in the United States in September 2020 said the 30-year-old, who received NT$10,000 (US$330) in prize money for his win on Thursday.

The contest, which is now in its 47th edition, was organized by National Dr. Sun Yat-sen Memorial Hall to promote Chinese-language learning and Taiwan's culture, according to Liang Yung-fei (梁永斐), the memorial hall's director-general.

The contestants, from 12 countries, combined fluent Mandarin public speaking, lively body language, props, and a sense of humor in their speeches. Some sang and one contestant even waved around Sansing green onions from Yilan to add color to her speech.

American medical student Samuel Woodward Noble, who praised Taiwan for its freedom and democracy in his speech, finished second and won NT$8,000 in prize money.

The 36-year-old American medical student from Indiana, who is currently in his final semester at Kaohsiung Medical University said he spent most of the past three weeks preparing for his speech.

"I have a midterm on Monday, but I have pretty much been spending all my time on this," Noble said.

Noble said he began learning Mandarin Chinese in 2002 when he first came to Taiwan as a Mormon missionary, when he stayed in the country for two years.

"When I went back after my mission to the U.S., in college I took Chinese classes," he said, adding that he continued to improve his Chinese proficiency when he returned to Taiwan about five years ago, initially studying at National Taiwan Normal University's (NTNU) Mandarin Training Center before moving to Kaohsiung.

Meanwhile, Jana Nudelman, 23-year-old American language program student at NTNU's Mandarin Training Center, won NT$4,000 for finishing in fourth place and 12 other contestants received merit awards for their speeches.
Li Chen-ching (李振清), a professor at Shih Hsin University in Taipei and one of the judges, called this year's presentations "the most exiting and inspiring" because the jury saw some of the best public speaking at the contest in many years.

"We don't often see such excellent display of content, use of words, meaning and intonation," he said.