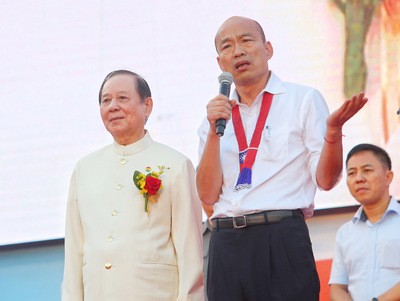 The policies include amending the Employment Insurance Act to allow workers on furloughs to receive 60 percent of their insured monthly salary, to be withdrawn from the employment insurance program, said Han's campaign manager Simon Chang (張善政).

In addition, the period of partially paid parental leave for parents with at least two children will be increased to nine months by further amending the Employment Insurance Act, he said after accompanying Han to a dialogue with young people in Hsinchu County.

Under the Labor Pension Act, employees have the option of depositing a maximum 6 percent of their salaries in employee pension accounts every month, with the deposits exempt from income tax, Chang noted.

However, they have little incentive to do so and so Han will provide subsidies for employees who opt to deposit a portion of their salaries in such accounts, according to Chang.

If elected, Han also plans to allocate NT$100 billion (US$3.36 billion) to the Labor Insurance Fund in 2021 and 2022, which it is estimated could benefit 6-10 million people, according to Chang.

Commenting on the proposals, Deputy Minister of Labor Lin Ming-yu (林明裕) said it takes considered steps and time to create a sustainable budget, but the most important element is how plans are executed.