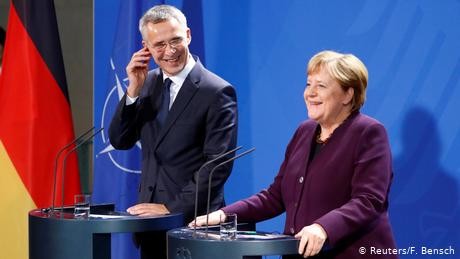 Both NATO Secretary-General Jens Stoltenberg and German Chancellor Angela Merkel reinforced the importance of Germany's role in the transatlantic alliance after a meeting to discuss German defense and other issues on Thursday in Berlin.

Stoltenberg described Germany as "at the heart of NATO," while Merkel said NATO was the "cornerstone of security" for Germany.

Merkel also condemned comments by French President Emmanuel Macron made earlier on Thursday. "This view does not correspond to mine," she said.

Macron described NATO as "brain dead," drawing special attention to the changing role of the United States within NATO.

Merkel described Macron's statement as "drastic words" that she did not agree with, and she reconfirmed Germany's commitment to its role within NATO. "Such a sweeping attack is not necessary," she said.

Stoltenberg is visiting Berlin to attend events linked to the 30th anniversary of the fall of the Berlin Wall.

Merkel: NATO must 'remain on speaking terms' with Turkey

When asked about the controversy surrounding Turkey's role in NATO given recent military action in Syria, the German chancellor suggested that throwing Turkey out of the alliance would achieve little.

"We have to foster dialogue and remain on speaking terms," she told reporters. Stoltenberg also expressed a desire for unity in troubled times, saying "We have to stand together."

Stoltenberg also welcomed the news that Germany will increase its military spending. He had met with German Defense Secretary Annegret Kramp-Karrenbauer to discuss this increase earlier on Thursday.

Kramp-Karrenbauer, a potential successor to Merkel, said Germany should set up a national security council to "do even more" in terms of defense.

Stoltenberg: US distance from NATO would 'divide Europe'

The role and relevance of NATO have come under fire recently given US President Donald Trump's threat to "moderate" the US commitment to NATO should the alliance's members fail to meet a defense spending target of 2% of GDP.

"The reunification of Germany and Europe would have been impossible without the United States' security guarantee," said Stoltenberg earlier on Thursday. "Any attempt to distance Europe from North America will not only weaken the transatlantic alliance, it also risks dividing Europe itself."

Stoltenberg has previously been credited with keeping a skeptical Trump onside in NATO.

US Secretary of State Mike Pompeo, who is also visiting Germany this week, stressed the important of the NATO alliance.

"I think NATO remains an important, critical, perhaps historically one of the most critical, strategic partnerships in all of recorded history," Pompeo told reporters in the eastern city of Leipzig.