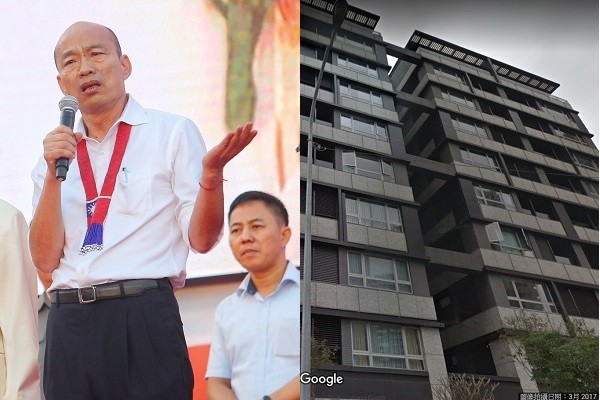 TAIPEI (Taiwan News) — Kuomintang (KMT) presidential candidate Han Kuo-yu's (韓國瑜) image as just another one of the "common folk" took a hit on Wednesday (Nov. 6), when news broke that he had previously purchased a home in Taipei for over NT$70 million.

On Wednesday, Next Magazine reported that Han had purchased a luxury home in Taipei's Nangang District for NT$72 million (US$2.3 million) in 2011. Han made the purchase of the over 90-ping home (one ping equals 3.3 square meters) while he was technically "unemployed" and before he took the position of general manager of Taipei Agricultural Products Marketing Corporation (TAPMC) in 2013.

At a news conference in Taipei that day, Democratic Progressive Party (DPP) Legislator Kuan Bi-ling (管碧玲) criticized Han as being a hypocrite pretending to be one of the "common folk" while living in luxury:

"The myth never ends. A couple with the wife making more money than the husband. They continue to use class struggle as a political rallying cry. A wealthy wife, a commoner husband. Is that possible?"

Kuan then sarcastically asked, "Was the last year of unemployment painful?" "You are aristocrats but pretend to be common folk," she declared, according to Formosa Television.

Also that day, campaign office spokeswoman Ho Ting-huan (何庭歡) tried to carry out damage control by saying that when Han says "common folk" (庶民), he means "civilians" (平民), reported Liberty Times. He went on to say that it refers to those who have no privileges and that "common folk" also have the right to buy and sell real estate, which is part of their personal financial planning.

When confronted by the media on Thursday, Han claimed that he had purchased the house one year before he became the general manager of TAPMC because he had hoped to have a house with convenient transportation near the MRT station. However, after a period of time, he had to allow it to be foreclosed because the payments on the principal were too high.

Han said the loan taken out to purchase the home was too difficult to repay, so he decided to sell it off. "It was a very simple matter," said Han.

However, when a reporter asked whether buying luxury houses makes him a "fake common man" (假庶民), Han responded that the house was put up for sale simply because of financial pressure. Another reporter then asked how Han was able to take out a loan on an NT$72 million luxury home while he was unemployed.

After hearing this, Han angrily pointed to the reporter and said, "Did you think the question all the way through? Because it was a bank loan. Why do you ask me why I spent NT$72 million to buy a house? Because it's a loan from the bank. But your question seems to be misleading. I don't know which media outlet you are," reported SET News. Exasperated, he then exclaimed, "Oh! It's SET News again!"

In the end, Han reiterated that he had not bought the house with NT$72 million in cash but instead had borrowed the money from the bank. He added that several years later, due to financial pressure, he had to bite the bullet and sell it to another owner, complaining once more, "What is this about taking out NT$72 million to buy a house? I find your question very strange."