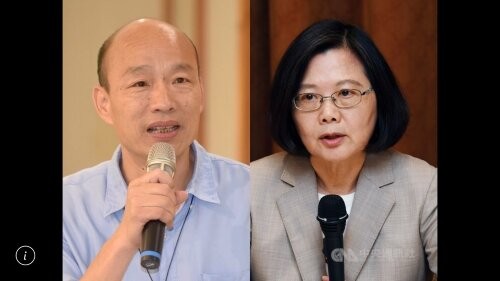 New Taipei City, which has 12 legislative seats up for grabs and is known as a bellwether municipality, has emerged as a battleground ahead of the January 2020 elections, drawing the attention of the presidential candidates and other major figures in the country's two main political parties.

Currently, nine of the 12 legislative seats in New Taipei are held by the governing Democratic Progressive Party (DPP), two by the main opposition Kuomintang (KMT), and one by the New Power Party (NPP).

During the recent two terms that the KMT was in power, from 2008-2016, it held a similar majority of legislative seats as the DPP now does in New Taipei, which indicates that the city may be something of a pacesetter.

For the upcoming elections, the election calculus is further complicated by the participation of smaller parties, including Taipei City Mayor Ko Wen-je's (柯文哲) Taiwan People's Party and the NPP, as well as several independent candidates.

In such a crowded field, the KMT is relying on its high profile figures like its presidential candidate Han Kuo-yu (韓國瑜), former New Taipei City Mayor Eric Chu (朱立倫) and the city's incumbent Mayor Hou You-yi (侯友宜) to drive turnout of its supporters, according to Lee Chien-lung (李乾龍), chairman of the KMT New Taipei City chapter.

Meanwhile, the legislative candidates can focus on laying the groundwork in their respective areas, Lee told CNA.

In the DPP camp, manager of the party's New Taipei City chapter Lee Chien-hsing (李建興) said the focus is on the many multi-candidate races, in which smaller parties such as the NPP may siphon off DPP votes, thus turning safe seats into competitive ones.

For example, in Constituency 1, which includes Tamsui, Bali and Linkou districts among others, the incumbent Lu Sun-ling (呂孫綾) of the DPP is facing a challenge in a five-way race, Lee said.

The DPP also has a tough fight in areas such as Constituency 8 (Zhonghe District), which is Han's hometown and where he retains a strong following, Lee said.

In both races, however, attention from President Tsai Ing-wen (蔡英文) and the party headquarters could give the DPP candidates a boost, he said.

KMT legislative candidate Huang Chih-hsiung (黃志雄) said that unpopular DPP policies such as pension reform and workday regulations have given his party an edge in areas like Constituency 5 -- Shulin, Yingge, and Xinzhuang districts.

In light of all those factors, the KMT said, it is confident it can win seven seats or eight seats in New Taipei.

The DPP, meanwhile, said it is hoping to pick up an additional seat, bringing its total to 10 in Taiwan's most populous municipality.

The deployment of the leading surrogates of both parties in New Taipei points to a shared recognition of the importance of the city and its role in determining the composition of the 10th Legislative Yuan.