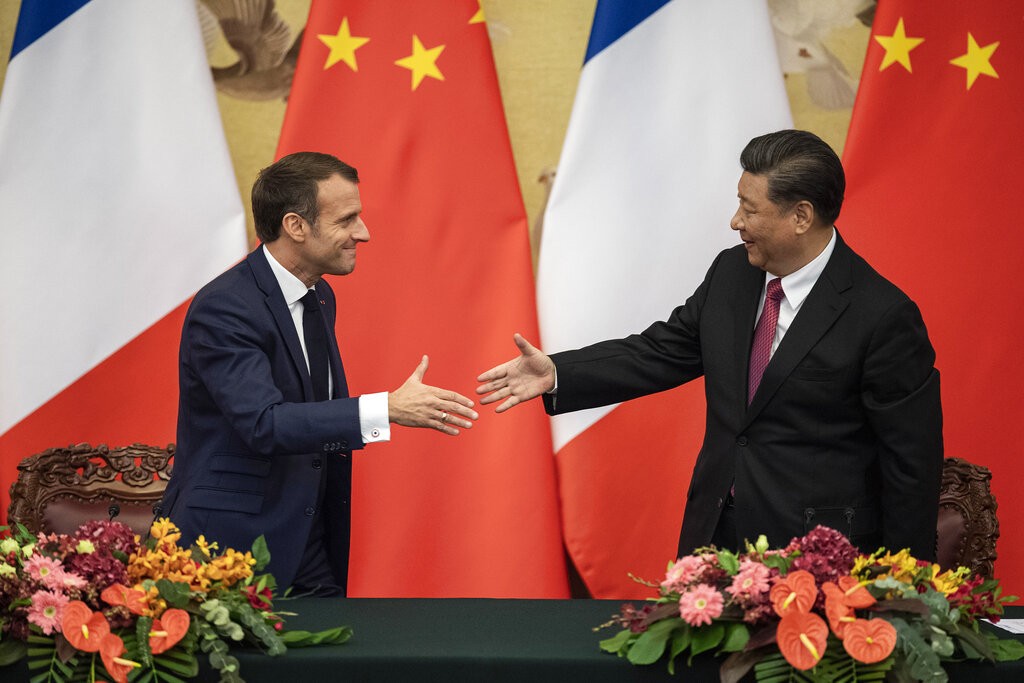 PARIS (AP) — When France's president wants to carry European concerns to the world stage to find solutions for climate change, trade tensions or Iran's nuclear ambitions, he no longer calls Washington. He flies to Beijing.

Macron portrayed himself as an envoy for the whole European Union, conveying the message that the bloc has largely given up on Trump, who doesn't hide his disdain for multilateralism.

Just as the Trump administration formally launched the process of pulling out of the 2015 Paris climate agreement , France and China issued a "Beijing call" on Wednesday for increased global cooperation in fighting climate change and better protecting biodiversity. Both countries have deplored the U.S. withdrawal.

"One country's isolated choice can't change the course of the world. It only leads to marginalization," Macron said.

While China's president tasted French wines and high-quality beef at an import fair in Shanghai, Macron was pushing for a broader opening of the Chinese market to European products.

"I think he discovered Languedoc wine. He wasn't familiar with it, he liked it. He tasted a Burgundy and a classic Bordeaux wine," Macron told reporters.

Xi said the two leaders were sending "a strong signal to the world about steadfastly upholding multilateralism and free trade, as well as working together to build open economies."

During his first state visit to China in January 2018, Macron vowed to return every year in an effort to establish "mutual trust."

Since then, Xi has travelled to France, when China signed an agreement in March to buy 300 aircraft from European plane maker Airbus.

This time, Macron travelled east, bringing with him an ambitious agenda that includes establishing a joint stance on reforming the World Trade Organization, fighting climate change and saving the nuclear accord with Iran.

After Trump pulled the U.S. out of the 2015 U.N. nuclear pact, France and China reiterated their support for the hard-fought deal both countries had helped negotiate.

In Beijing, Macron described recent Gulf tensions as "the negative impact of the non-respect of a multilateral agreement. ... The American error has been to leave (the pact) unilaterally."

"Strong multilateralism is more efficient than shrill unilateralism," Macron said, praising China's support for de-escalation of the tensions as the Europeans try to save the nuclear deal with Iran.

"China and France are together with the Europeans and Russians," he said. "We are convinced that we should increase our joint efforts to bring Iran back into compliance."

But whereas Trump has responded by aggressively imposing tariffs on hundreds of billions of dollars worth of goods from China, Europe and elsewhere, bypassing rules set by the WTO, the EU considers that a trade war is not the appropriate response.

"We must get stable and cooperative trade rules at the international level," Macron said, referring to a plan to reform the WTO. Trump complains that the WTO, which is tasked with resolving trade disputes, is weak and ineffective as China flouts its rules and it takes years to address trade complaints.

Macron said it is Europe and China's shared responsibility to make proposals to reform the WTO, because it would be a "fundamental error" to wait for "those who are calling into question the multilateral system."

The White House did not immediately comment on Wednesday.

Besides the tariffs on China, the U.S. has hit EU steel, aluminum and agricultural products with tariffs, drawing retaliation from the 28-country bloc. And the Trump administration is due to decide this month whether to impose tariffs on Europe's massive auto exports, a move that would significantly escalate tensions that are already hurting the global economy.

Eswar Prasad, a Cornell University economist and former head of the International Monetary Fund's China division, said "the Trump administration's antipathy to multilateralism, its repudiation of many international agreements, and hostility toward even longstanding allies, have all eroded U.S. economic and geopolitical influence."

"The U.S. is now seen by other countries as an unreliable and untrustworthy partner, leaving them to maneuver around the U.S. by striking bilateral and multilateral deals that protect and advance their own interests," Prasad said.