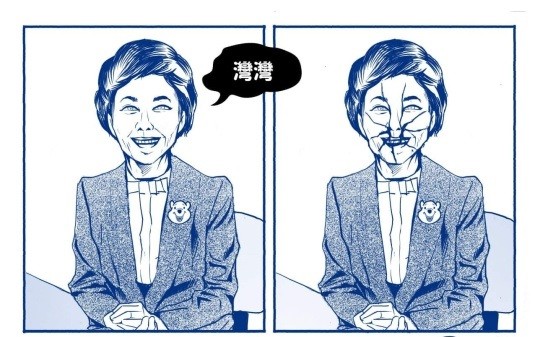 TAIPEI (Taiwan News) — In response to a creepy broadcast by a CCTV anchor calling on "Wan Wan [Taiwan]" to return home (湾湾, 回家吧) after China's release of "26 measures" to entice Taiwanese talent, multiple memes have surfaced online mocking the woman as being a wolf in sheep's clothing.

On Monday (Nov. 4), China's Taiwan Affairs Office (TAO) and the National Development and Reform Commission (NDRC) announced 26 additional "measures" to further promote economic and cultural exchanges and cooperation between the two sides of the Taiwan Strait," including 13 for Taiwanese companies and 13 for Taiwanese citizens, whom they purport will be provided "equal treatment with the Chinese populace."

That same day, CCTV anchor Hai Xia (海霞) appeared in a prerecorded video to announce the new incentives and said, "We show our sincerity to our Taiwanese compatriots because we are all Chinese. Taiwan's destiny is connected with its motherland. Wan Wan come home!" These words were rapidly shared on China's heavily censored and carefully orchestrated social media platform Weibo, but Taiwanese netizens were incensed at the condescending, childish word "Wan Wan" used to refer to Taiwan.

On Tuesday, cartoonist A Ray posted a disturbing illustration showing Hai saying "Wan Wan" before her face splits open to reveal a horrific monster with multiple rows of jagged teeth.

On Wednesday, New Power Party Legislator Hung Tzu-yung (洪慈庸) posted a screen capture of Hai's broadcast on Facebook and superimposed the words "Thank you for your concern. We Taiwanese are already at home." She then wrote that the "26 measures" and "31 measures" preceding them are "sugar-coated traps" and that "The lies of 'one country, two systems' have been seen very clearly by Taiwanese." Also on Wednesday, artist nagee posted an illustration on Facebook of a brownie topped with a strawberry patterned like the Chinese flag nestled on a bear trap. In the caption, nagee wrote:

"I heard they prepared 26 of these 'gifts.' The Tibetan people received one, and they're so happy that they burn themselves. The people of Xinjiang have received one and live happily in concentration camps. Everyone has a home and is living under justice. Hong Kong people have accepted it and have social harmony. Since then, there have been no cases of rape or murder, no suspicions, no disputes. Taiwan is safe! The people are rich! Make a big fortune!

Ah, when will our human rights activist Lee Ming-chul (李明哲) be able to come home???"

That same day, a user of the social media site Dcard sarcastically wrote, "Wan Wan is coming home." She then posted screenshots of Hai saying "Wan Wan, come home" with a photo of penguins waddling below with the caption saying, "Want to meet with Taiwanese company owners who returned to Taiwan to invest." Also on Wednesday, the Facebook page @memepowertw posted a meme with Hai making her infamous comment at the top and a bear trapped in a tiny cage at the bottom. The caption below the bear reads, "Then I'm dead meat."

The administrator then wrote:

"Xinjiang, Tibet, and Hong Kong are being tortured and killed by the Chinese. You Taiwanese are still not awake. In 2020, you will vote for Han Kuo-yu (韓國瑜) or even abandon your vote to let Han fans win with pleasure.

Then prepare to be like this black bear imprisoned by the Chinese for a lifetime. They collect his bile while he's still living and cut his paws off once he's dead." Batman slaps the petulant Robin and exclaims in Taiwanese Hokkien "Wan what? Tell Xi to go to hell. Do I know you?" 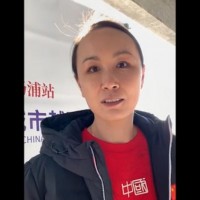