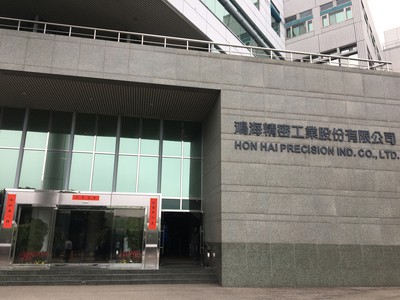 On the back of the debut of the latest smartphones from Apple Inc., Hon Hai Precision Industry Co., one of the most important iPhone assemblers, reported Tuesday that sales hit the highest level ever for October.

Data released by Hon Hai, also known as Foxconn on the global market, showed consolidated sales for October stood at NT$595.88 billion (US$19.60 billion), up 1.04 percent from a year earlier and also up 1.38 percent from a month earlier.

"The solid October sales report is evidence that Hon Hai benefited from the launch of the iPhone 11 series, which has posted more shipments than expected on the global market," MasterLink Securities analyst Tom Tang said.

Apple unveiled the new iPhones in September -- high-end models iPhone 11 Pro and 11 Pro Max and the cheaper iPhone 11 -- to replace the iPhone XS, XS Max and XR, which were launched in September 2018.

In the first 10 months of this year, Hon Hai posted NT$4.197 trillion in consolidated sales, up 2.99 percent from a year earlier. The sales figure for the first nine months of the year were also the highest level for that period in Hon Hai's history.

In addition, Tang said, Apple is likely to introduce 5G iPhones next year, a move expected to further boost shipments of iPhones and in turn benefit the U.S. consumer electronics giant's suppliers, including Hon Hai.

"That's why buying in Hon Hai shares has been solid in recent trading sessions on the main board on high hopes of higher shipments in the fourth quarter and even for next year," Tang said.

Hon Hai has scheduled an investor conference for Nov. 13 to detail its third quarter results and fourth quarter outlook. The market is waiting for the company to comment on its 5G technology development.

Due to the growth in sales for October, Hon Hai shares on Wednesday continued an uptrend from a session earlier to close up 0.44 percent at NT$90.40, off an earlier low of NT$88.90, and outperformed the broader market, where the benchmark weighted index ended up 0.08 percent, at 11,653.07.