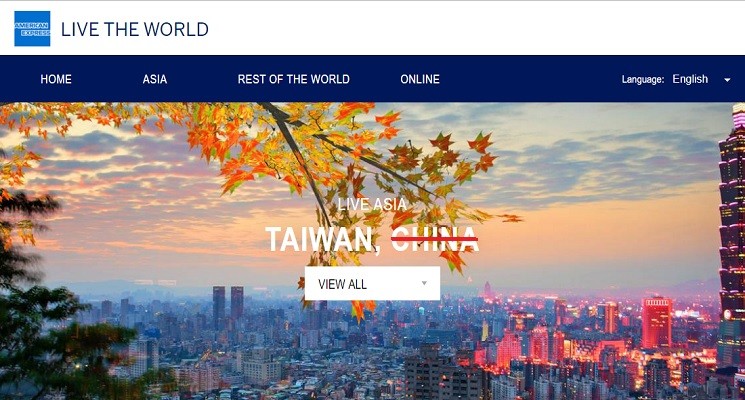 TAIPEI (Taiwan News) — American Express has joined the growing list of corporations that have kowtowed to the Chinese Communist Party (CCP) by changing the listing for Taiwan on its Live the World website to "Taiwan, China."

On its Live the World discounts website for card-holding international travelers, American Express suddenly and inexplicably changed its listing for Taiwan to "Taiwan, China" on its homepage. The change appears to have taken place over the weekend (Nov. 2-3), according to a regular user of the site who spoke to Taiwan News on condition of anonymity.

The American Express cardholder said he has used the website for over two years and that this was the first time Taiwan was listed as being part of China. The change appears to be deliberate and systematic, as "China" now appears next to all "Taiwan" entries on the website.

The main corporate website for American Express still lists Taiwan as a country at the bottom right-hand corner of the homepage. However, once one clicks on the "Change Country" link, it lists Taiwan under "Greater China," with "China" again placed next to Taiwan after a comma.

American Express did not announce the change, but it could have something to do with the fact that the conglomerate became the first U.S. credit card company allowed to build its own bank card payments network in China in November of last year. This incident marks the latest example of China using its economic leverage to bully private companies into dropping all references to Taiwan as a separate country from their websites.