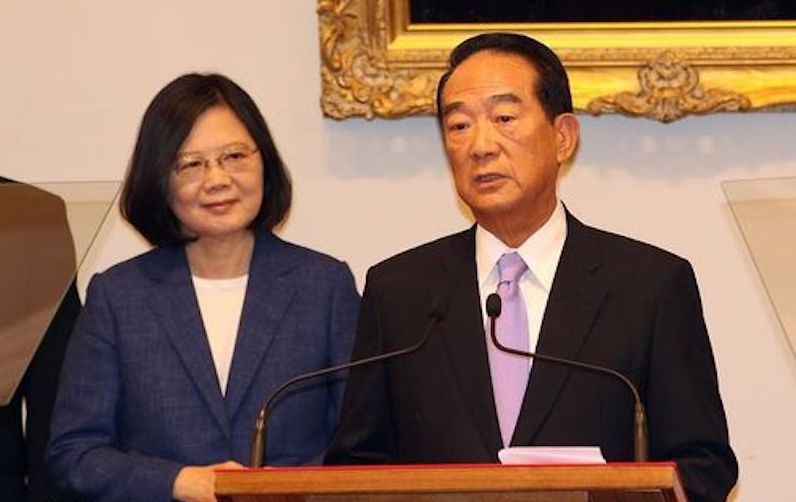 That has certainly been the case for President Tsai Ing-wen (蔡英文), whose re-election prospects are looking far rosier than they were this time last week.

This is an introduction that you might expect to head off into another catalog of gaffes from her main rival, KMT candidate Han Kuo-yu (韓國瑜). To be sure, Han has had his moments this week, such as when he claimed that the U.S. never bombed Taiwan during World War II.

But it is other circumstances that have gone Tsai’s way this week.

A week ago, it looked likely that there would be two pan-green candidates taking on just one pan-blue candidate in the upcoming general election.

Former Vice President Annette Lu (呂秀蓮) appeared more than happy to risk a Han administration by running for president herself, while Terry Gou’s (郭台銘) decision not to run as an independent appeared to leave the way clear for Han.

Then, over the weekend, came the news that Annette Lu was withdrawing her candidacy after failing to secure the number of signatures required to qualify.

It was a telling moment. While Lu’s late decision to throw her hat in the ring had always meant it was going to be an uphill struggle to make the numbers, she ended up with fewer than half of the 280,384 signatories she needed.

The fact that she failed shows that there is a lack of appetite among DPP supporters to split the pan-green vote, despite the concerns many may have with Tsai’s leadership. Meanwhile, her reaction to her forced withdrawal hints at a candidate who was not necessarily running with the country’s best intentions at heart.

Since Lu's departure, a number of pro-independence campaign groups have thrown their support behind President Tsai, indicating that the pan-green camp is finally just about united as we enter the crucial final couple of months of the campaign.

If that news wasn’t good enough, it looks like another notable pan-blue candidate might be about to enter the presidential race.

James Soong (宋楚瑜), chairman of the People First Party (PFP), has run for president on three previous occasions, and it is looking more and more likely that his party will nominate him again this time around.

Soong took 13 percent of the vote in the previous election, but the bulk of his support came from pan-blue voters. This probably didn’t affect the outcome but likely enhanced Tsai’s margin of victory.

But if he takes similar numbers away from Han Kuo-yu this time, it could prove decisive.

Interestingly, Soong was working as a presidential advisor to Tsai until earlier this year, acting as an envoy in talks with the communist regime in China on various issues. His resignation came as a result of Chinese media reports which quoted Soong as backing the so-called ‘one country, two systems’ model, something he denied.

Some pan-blue voters may be put off Soong by his willingness to cooperate with Tsai, but their political differences were always clear, especially with regard to cross-straits affairs.

No time for complacency

Soong’s candidacy is not yet confirmed at the time of writing, but once it is, some in the Tsai camp may feel that the battle is already half-won. That attitude would be an enormous mistake.

No less a figure than former President Chen Shui-bian (陳水扁) has already said that if Tsai wants to win, she must not rest on her laurels.

He is absolutely right. While the pan-green side appears to be coming together, there is still plenty of dissatisfaction with Tsai’s first term, and the divisions are far from fully healed.

Tsai needs to work hard to bring as much of her own side behind her as possible over the next couple of months. Every vote will be vital in this election, and the DPP camp must not take anyone for granted.

Her personal popularity with the electorate in Taiwan remains low. She has been hammered over controversial and badly-delivered policies and chronically poor communication of key policy issues.

At this stage, it would be advisable for Tsai to show some humility and admit that there are things in her first term she could have done better. If she can demonstrate a clear strategy to improve her own performance and that of her party and government over a second term, she could start to turn her low approval ratings around.

Her strong stance against China over its interference in Taiwan, Hong Kong, and other issues have proved popular with voters. There are plenty of sticks to beat the communist regime with, and her robust statements should continue.

The past week has undoubtedly seen the pendulum swing a little more in her favor. But if Tsai Ing-wen is to secure a second term in office and save Taiwan from four years of Han Kuo-yu in high office, there is still much work to be done.