TAIPEI (Taiwan News) — Taiwan will establish a unit designated for promoting trade with the United States by the end of 2019, according to the government-sponsored Taiwan External Trade Development Council (TAITRA).

In the 2019 Indo-Pacific Business Forum, an event of the East Asia Summit that took place in Bangkok on Monday (Nov. 4), TAITRA Chairman James Huang (黃志芳) met with Under Secretary for International Trade Diane Farrell and the Executive Vice President of the Overseas Private Investment Corporation, David Bohigian. The meeting explored opportunities for the two sides to deepen cooperation on trade affairs.

To foster closer ties, TAITRA in a press release announced its plans to set up the Taiwan-US Trade and Investment Networking Center. The plan is supported by the American Institute in Taiwan (AIT) and tasked with servicing the business sectors of both countries.

In addition, the non-profit trade organization of Taiwan is poised to establish a marketing center in the western United States next year to increase the presence of Taiwanese brands. It has also participated in the AIT-spearheaded Talent Circulation Alliance (TCA), which seeks to cultivate a pool of internationally-integrated and digitally savvy professionals.

Taiwan and the U.S. have been actively engaged with each other in many aspects. On Monday (Nov. 4), the two countries kickstarted their first joint cyberwarfare exercises in Taipei to test the island’s capability to fend off cyberattacks, which are believed to originate primarily in China. 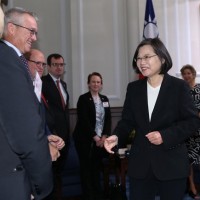