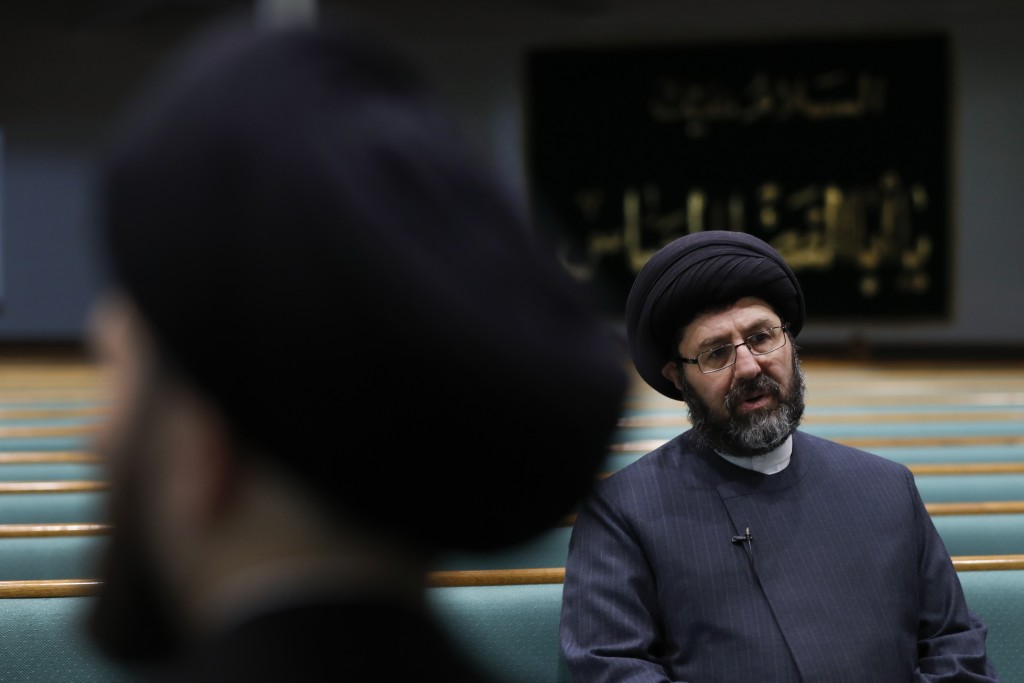 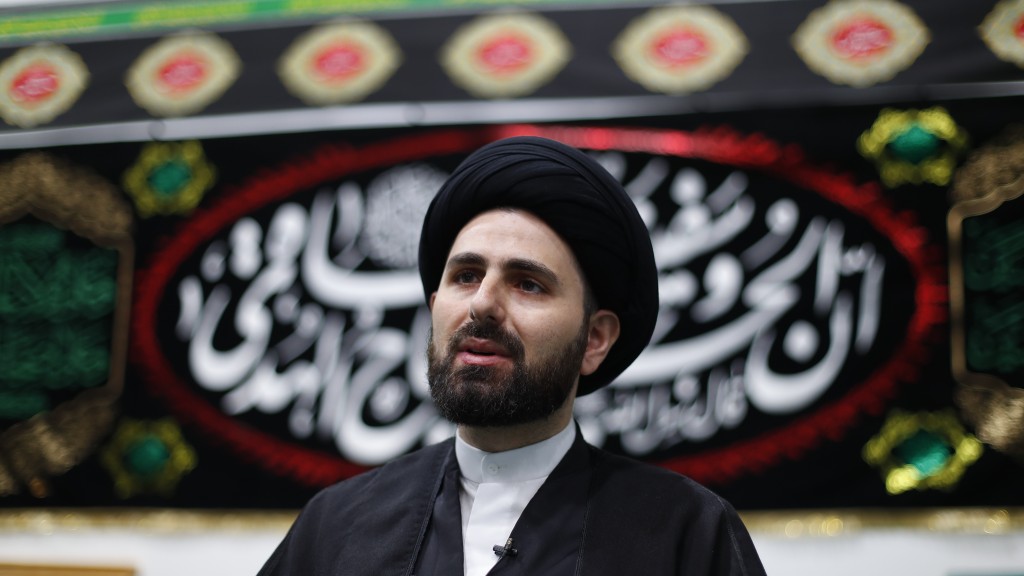 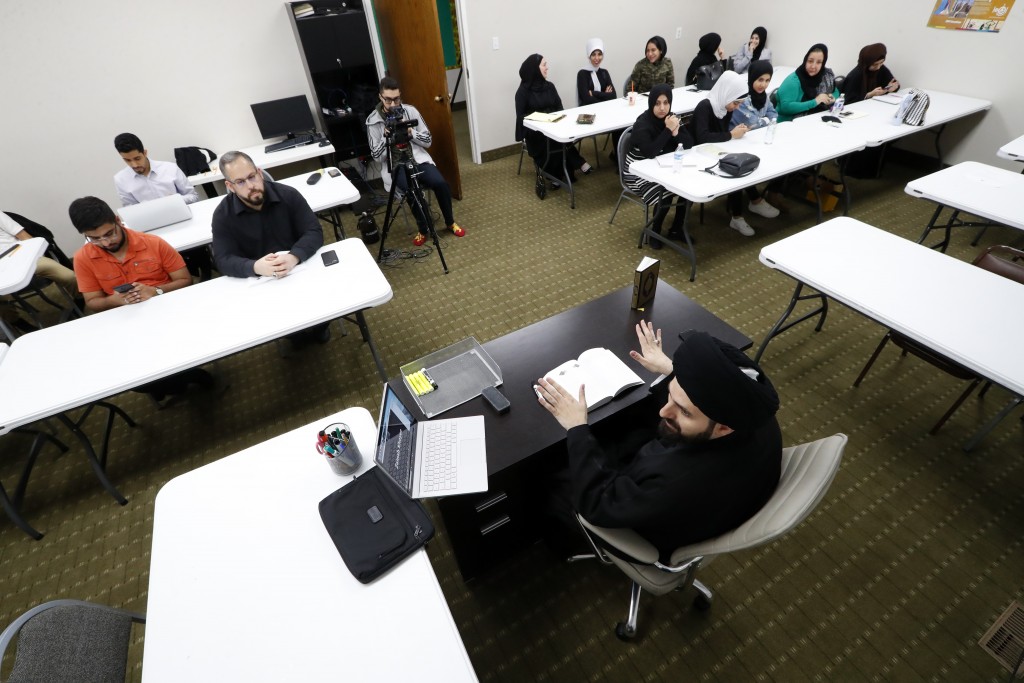 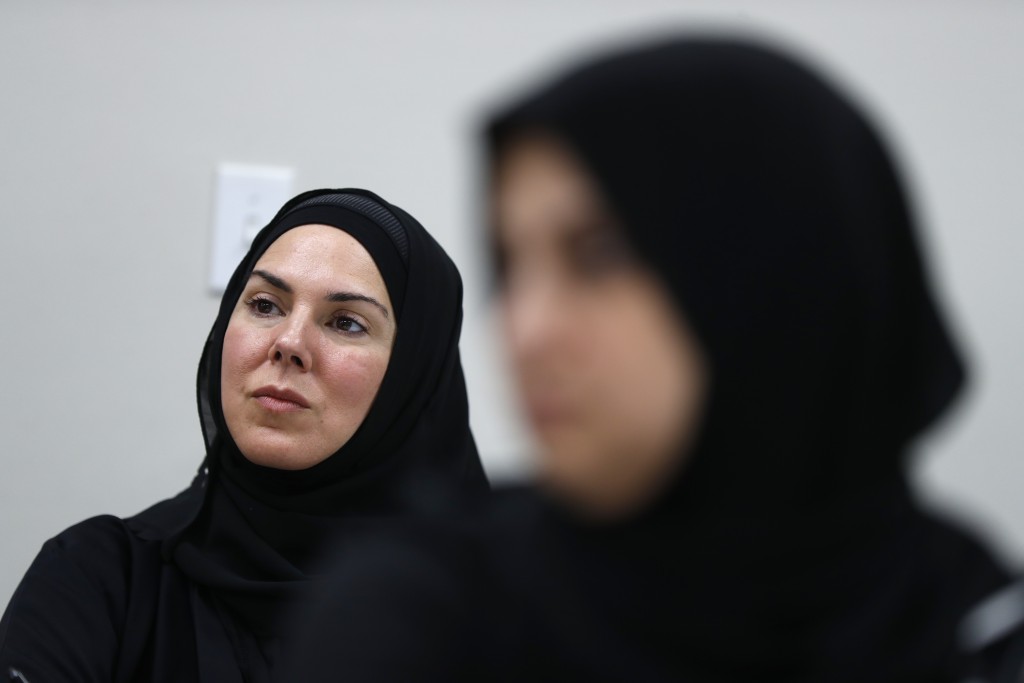 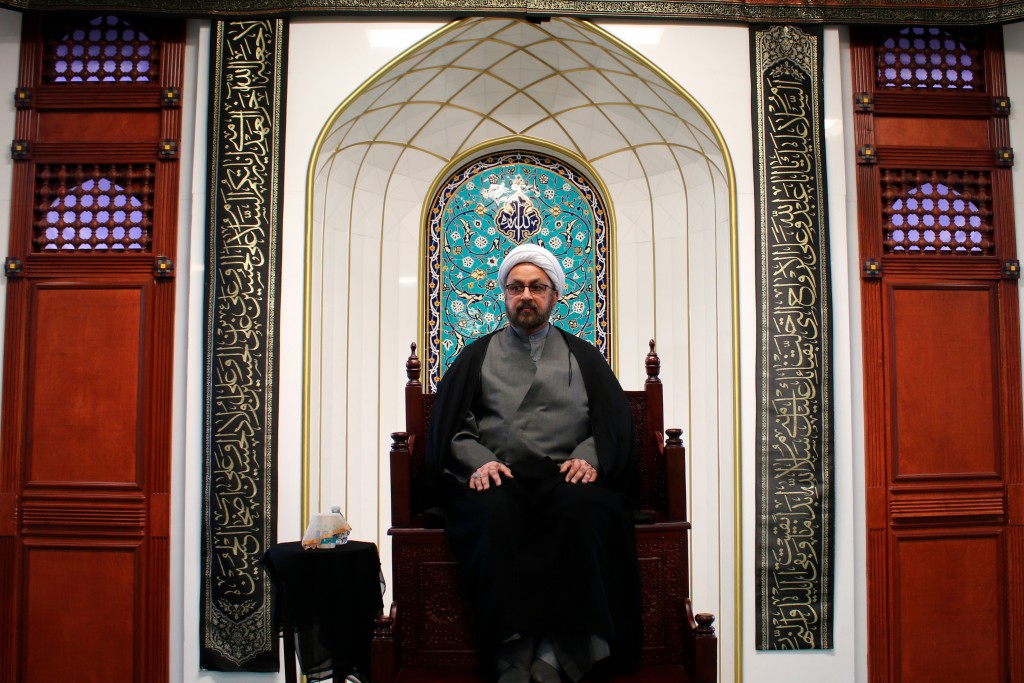 DEARBORN HEIGHTS, Mich. (AP) — The seminary instructor challenges his students: "Brothers and sisters" don't believe in God because your "parents believe in God," but because "you know why God exists."

The students are engaged, deeply engrossed in a discussion about faith with their teacher and one another. But more than Imam Mohammad Qazwini's interesting delivery, deep understanding of Islam and his formal training at a seminary in the holy city of Qom, Iran, have drawn them to this suburban Detroit classroom just off the large prayer room of a mosque.

He speaks their language — literally.

The Quran, Islam's holy book, is written in classical Arabic, but many of the students aren't well-versed in the language. Qazwini navigates its intricacies effortlessly — in the everyday English they use, opening a door for many of the students and possibly an option for solving a cleric shortage at the same time.

Al-Hujjah, started by Mohammad Qazwini and his father, Islamic Institute of America leader Imam Hassan Qazwini, is the newest of several seminaries focused on the Shiite branch of Islam in the United States and Canada working to address a shortage of leaders created by two realities.

An increasing number of U.S. Muslims want guidance from religious instructors who they can understand linguistically and culturally. And the traditional imams and scholars who once came from the Middle East or were educated in schools there are having more difficulty entering the United States. The Trump administration imposed a travel ban in January 2017 on people from several Muslim majority countries, and the government has made it harder to enter the U.S. entirely, with more rigorous interviews and background checks.

"In many other states there are mosques with no ... functional imam, who can assume the responsibilities of the religious leader or even speak," the elder Qazwini said. "I thought maybe a long-term solution for facing this shortage is to have our own Shiite Islamic seminary in the U.S., instead of waiting for imams to come."

The father and son started the seminary in fall 2017 with about 35 registered students. Now it has nearly 400, with some attending in-person, others watching live and still more watching recorded videos online. In addition to the Qazwinis, there are four other instructors.

The seminary has students in 25 countries, but the emphasis is on North America, according to the elder Qazwini, a native of Iraq. He said the desire to deepen the bench of U.S.-trained imams, scholars and speakers is also driven by the political reality of the travel ban.

In a class on a recent evening, Qazwini led an intense session on faith, proposing case studies, playing devil's advocate and prompting a philosophical back-and-forth with his students. His execution is informal but authoritative. The students understand him.

"I need to make sure he speaks the language, he's knowledgeable, he's respectful, he's truly caring and he's trying to adapt to the country we live in," said Alia Bazzi, 32, a graphic designer and seminary student. "Why would my imam speak Arabic if we live in America and the main language we speak is English? ... I want to know he's up to date, he knows what's going on."

About an hour's drive south, in Toledo, Ohio, the Ahlul Bayt Center mosque has been running for about four years without a full-time imam. Imam Mohammad Qazwini and other clerics travel there for services and special events.

Dr. Ali Nawras, a board member of the Toledo mosque, said the arrangement works for day-to-day needs because of its proximity to the Detroit area — a longtime hub for Islam in America. But the center seeks a permanent imam to meet its broader, long-term objectives: Having a strong understanding of challenges within their own community, particularly among youth, and forging stronger bonds between the Muslim and non-Muslim populations.

"On one hand, you can find an imam who is very knowledgeable, very strong background in theology, but that person might not speak English or might have lived most of his life outside the country," Nawras said. "On the other hand, you might find someone who is born here and educated here, but they don't have a good or strong theology background."

"To have a combination of both, that is where the challenge comes," he added.

Qazwini wants to expand the curriculum, faculty and enrollment at Al-Hujjah but another important step for the seminary is pursuing accreditation so it can award official degrees rather than completion certificates. In the meantime, he has spoken with other established schools offering Islamic studies about collaborating on accreditation.

Faezi, a Pakistan native who also studied in Iran, said the program is on hold while they seek more resources, but it plans to accept students in 2020.

Traditionally as a minority, Shiite communities are more dependent on having trained and accredited scholars leading their mosques, but as the community has grown in the United States, so too has the need for these trained scholars. Faezi said in the 1980s, Shiite communities began inviting scholars and imams from places like India, Pakistan, Iraq, Iran or Lebanon to fulfill the need. But many scholars were unable to get visas, especially as relations between the United States and some of the countries soured.

"Those who were able to get the visa and they came here, they were also not very effective, because their mindset was very different than the people who had migrated here... not to mention the communication barrier," Faezi said.

Jawad Bayat, 31, comes from a Shiite background and is part of the changing face of faith here. While in college, he began to explore his spiritual journey and considered going abroad to attend a seminary. Instead he enrolled at Hartford Seminary in Connecticut, a non-denominational graduate school for religious and theological studies. Bayat graduated in 2015 and now serves as an imam and Muslim chaplain at an academic medical center in Cleveland, Ohio.

"There is a shortage of Muslim leaders as a whole in the U.S., whether it's in Sunni or Shiite communities," Bayat said, adding the focus on applied spirituality that allows him to connect with the Cleveland Muslims he serves now may not have been covered in a more traditional seminary overseas.

Zaytuna College in Berkeley, California, was founded in 2009 and is the first accredited U.S.-based Muslim college, but it focuses on the Sunni branch of Islam. Overall, Sunni is the largest sect of Islam and Shiite the second-largest. The schism between them stems from the early days of Islam and arguments over the Prophet Muhammad's successors as the spiritual and temporal leader.

There are nearly two dozen other institutions across the United States offering varying levels of post-secondary degrees in Islamic scholarship. Most are also Sunni-based and are in the process of seeking accreditation.

For Ali Ghazala, 22, the purpose of attending the Michigan seminary is to gain a greater understanding of his faith so he can better represent it around those who don't practice or understand it.

"It is vital that if you are a Muslim growing up in the West interacting with non-Muslims that you present to them the correct religion," he said. "I have to be the one who is certain before I can go to other people and explain to them why I am the way I am or why we are the way we are."