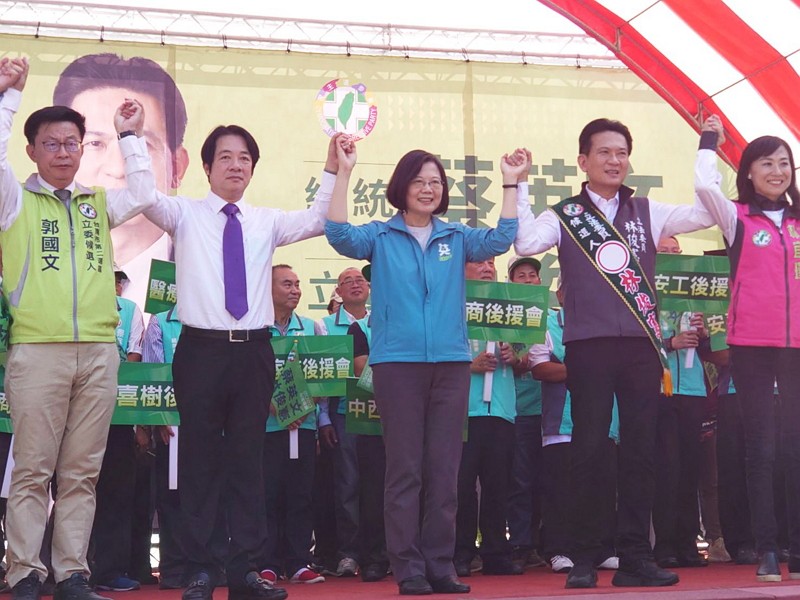 The legislator, Lin Chun-hsien (林俊憲), has established his headquarters in Tainan. The occasion marked the first time Tsai and Lai had shown up together following the bitter DPP primaries earlier this year.

The pair have not been seen together in public since they delivered their policy platforms in June, reported Liberty Times. Lai, who challenged Tsai for her re-election bid in January, has shunned public appearances after his defeat in the primaries.

He kept a low profile until October, when he traveled around the United States to drum up support for Tsai. The move was interpreted in some quarters as sending out a message that he could become Tsai’s running mate.

At the event in Tainan, Tsai expressed her gratitude to Lai for representing her on the American tour, and at the same time called for unity within the party. In turn, Lai rallied support for Tsai and called on the public to “safeguard the sacred status of Tainan as the origin of Taiwan democracy” by voting for DPP candidates in the legislative election, to be held in conjunction with the presidential election, reported CNA.

Lai stressed the fate of Taiwan could be at stake if Tsai of the pro-independence party was not re-elected, citing the turmoil in Hong Kong and Tibet. He called upon grassroots voters in the city of southern Taiwan, which is traditionally a stronghold of the DPP, to make the right choice and help the ruling party gain a majority in parliament, wrote the report.