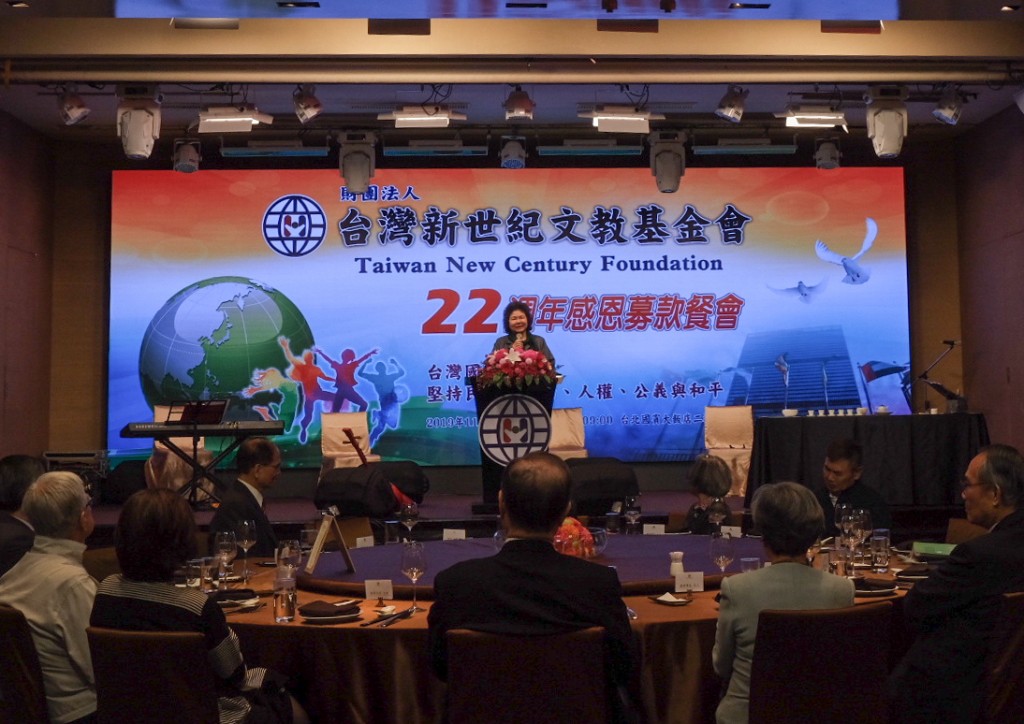 TAIPEI (Taiwan News) — Presidential Office Secretary-General Chen Chu (陳菊) and former Premier Yu Shyi-kun (游錫堃) on Friday (Nov. 1) attended a fund-raising dinner organized by the Taiwan New Century Foundation (TNCF) in Taipei, showing their support for the organization while calling on the audience to vote for President Tsai Ing-wen (蔡英文) in the key election next January.

Recalling her first experience in reading a book by TNCF Founder Chen Lung-chu (陳隆志) when she was part of the democratic movement in the late 1970s, Chen said the law professor’s dedication to Taiwan’s independence had inspired a generation of young people.

The normalization of Taiwan’s statehood is an ultimate goal that requires a sense of unity, said Chen, urging the guests to retain faith and support Tsai’s reelection. The government cannot satisfy all people, but Tsai has made a lot of effort in carrying out various reforms left undone by the Kuomintang, said Chen, adding that she has confidence in Tsai’s continual contribution to the country for the next four years.

Yu, who has once chaired the Democratic Progressive Party (DPP), expressed gratitude for Chen Lung-chu. His work discussing Taiwan’s independence and statehood has greatly influenced the DPP and Taiwan, said Yu.

Claiming himself as a civilian now without holding any official position, Yu stressed that Taiwan should work toward establishing diplomatic relations with the United States despite multiple challenges, in particular opposition from China, lying ahead. When Taiwan’s relationship with the U.S. is formalized, the opportunity for the island to join the United Nations will follow, Yu declared. Yu also expressed his support for Tsai’s reelection. The former premier commended Tsai for her contributions to diplomacy, especially in terms of strengthening Taiwan’s ties with the U.S. and seeking support from the international community in the face of China’s pressure.

TNCF founder Chen Lung-chu later also delivered a keynote speech on his newly-published book calling for the normalization of the country. At the book’s launch event last week, President Tsai expressed her admiration for Chen’s long-term care for Taiwan’s future and dedication to promoting the public debate in Taiwanese society.