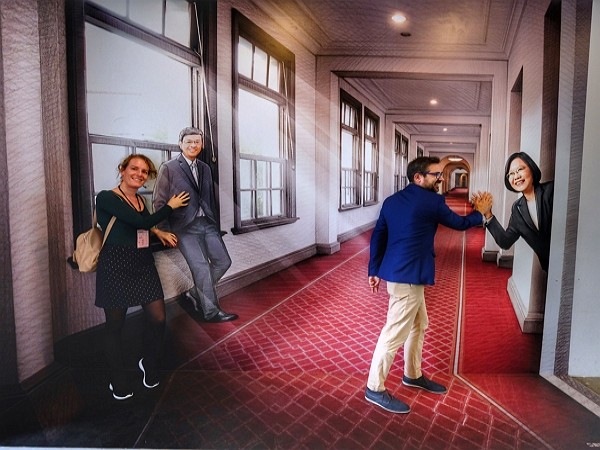 In August, Taiwan's General Association of Chinese Culture and the Ministry of Transportation and Communications held a competition in which foreign travelers competed to spend a night at the Presidential Office Building. Hundreds of international YouTubers and bloggers entered the competition, but only ten groups of winners were selected.

After South Korean travel vlogger Kim Juh-yeok and Japanese blogger Mikiko Ishii praised their stays at the Taiwan Presidential Office, Reveszm and Kenesei expressed their amazement at the idea of combining the country's historic political building with tourism. Reveszm said he has been to more than 50 countries but that this was his first visit to Taiwan, reported CNA.

The couple also received a handwritten card from Taiwan's President Tsai Ing-wen (蔡英文) as well as Taiwanese dried mango, which happens to be Reveszm's favorite fruit. Reveszm told the press that they are planning to visit a night market and famous Taiwanese attractions, such as Taipei 101 and Chiang Kai-shek Memorial Hall.

When asked about his first impression of Taiwan, Reveszm said that Taiwanese people are very friendly and professional. He also promised to write about his unique experience when he returns to Hungary, along with the pictures he took during his stay.