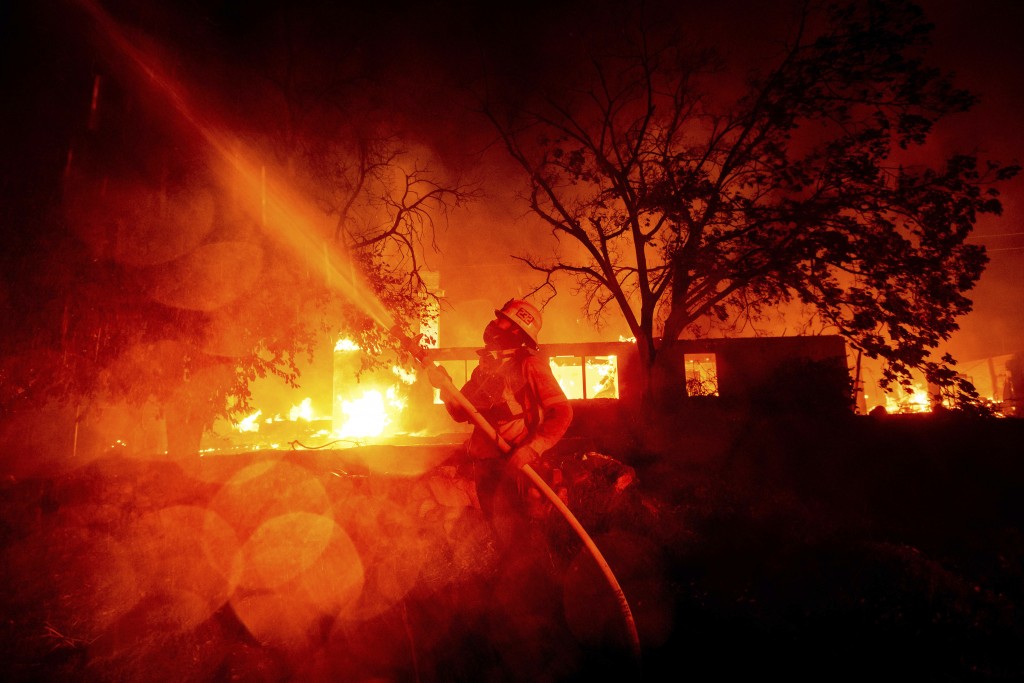 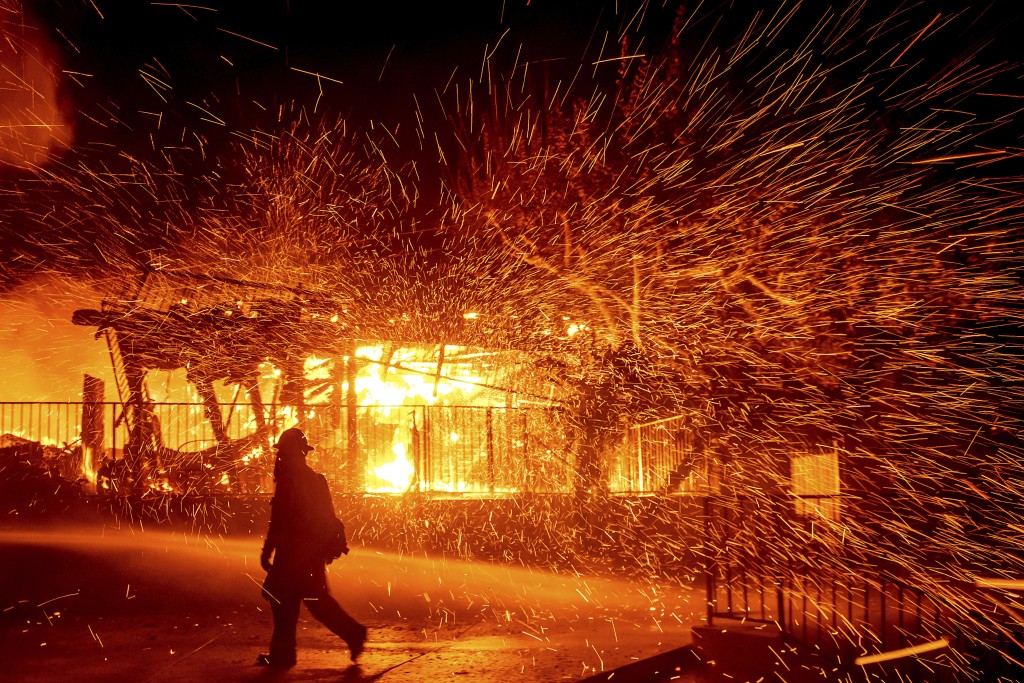 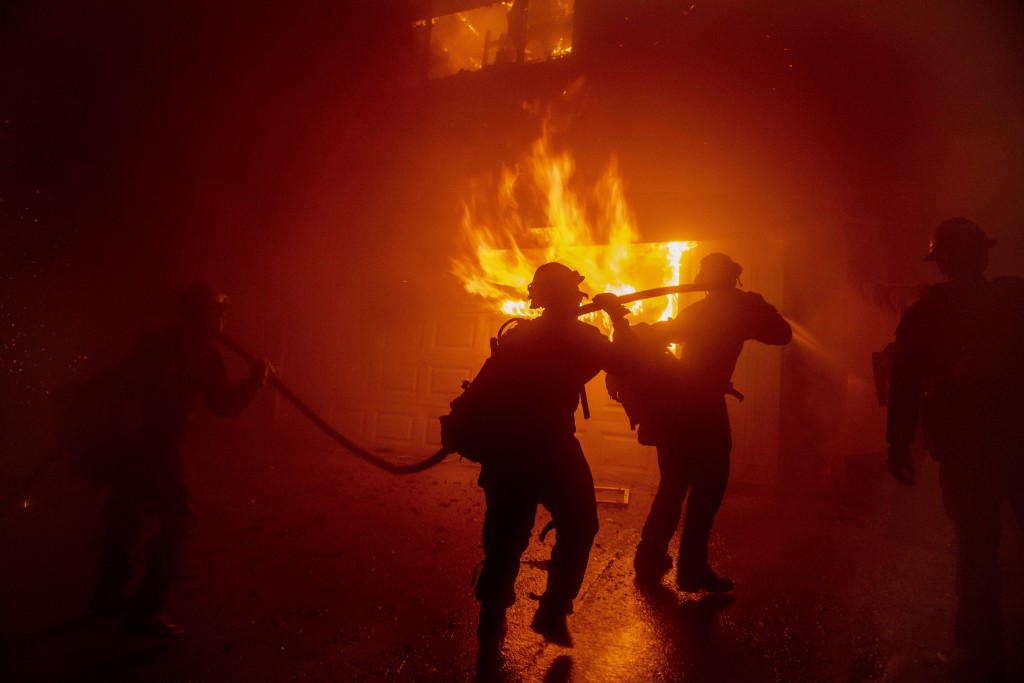 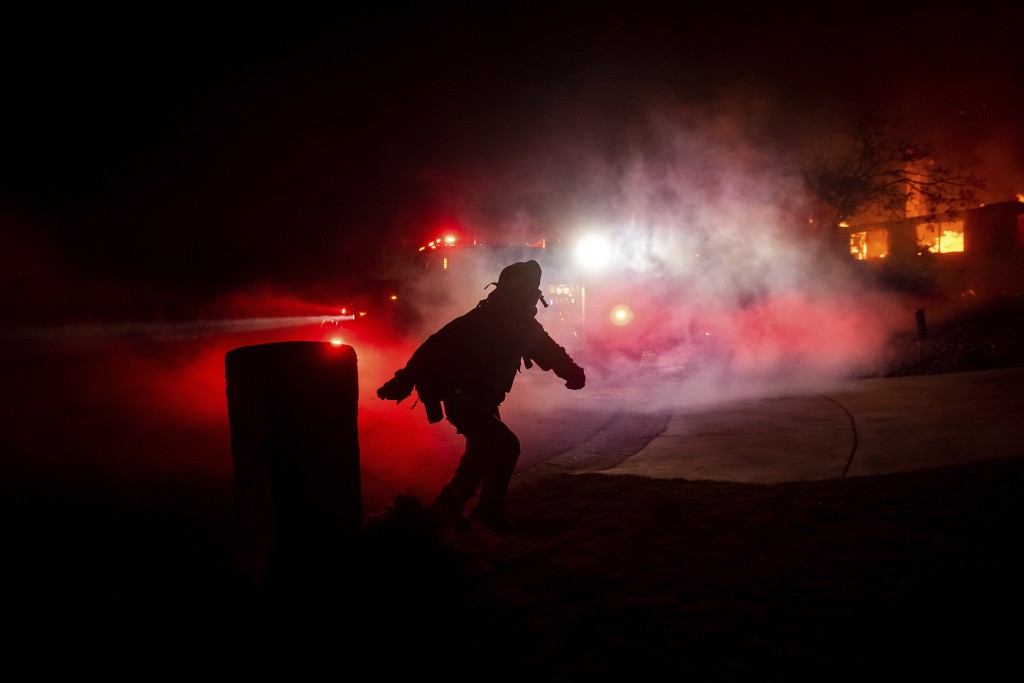 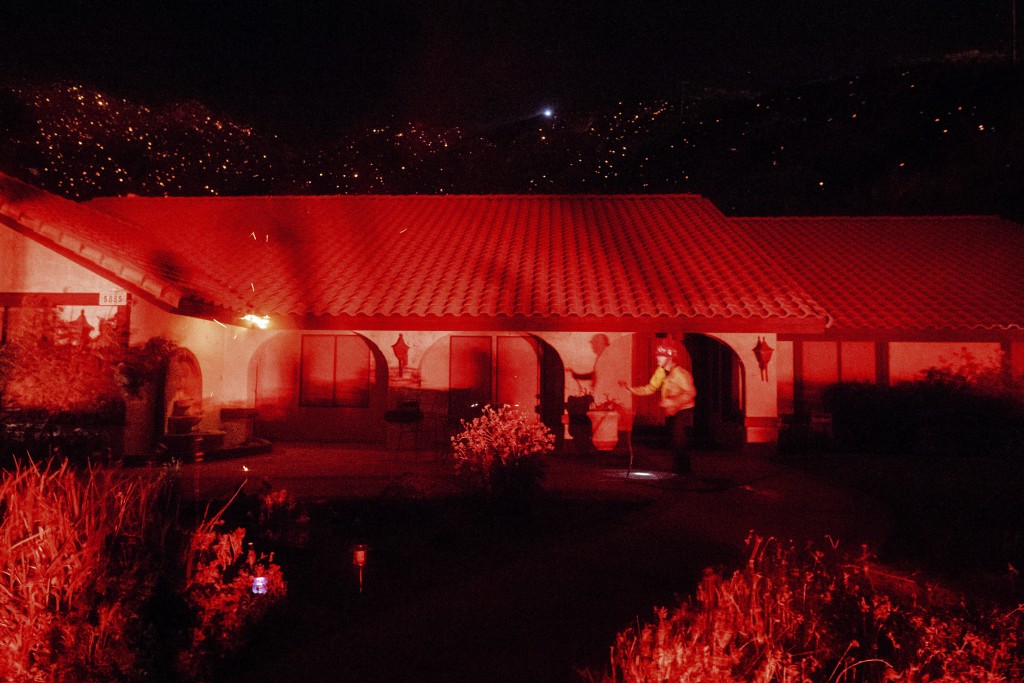 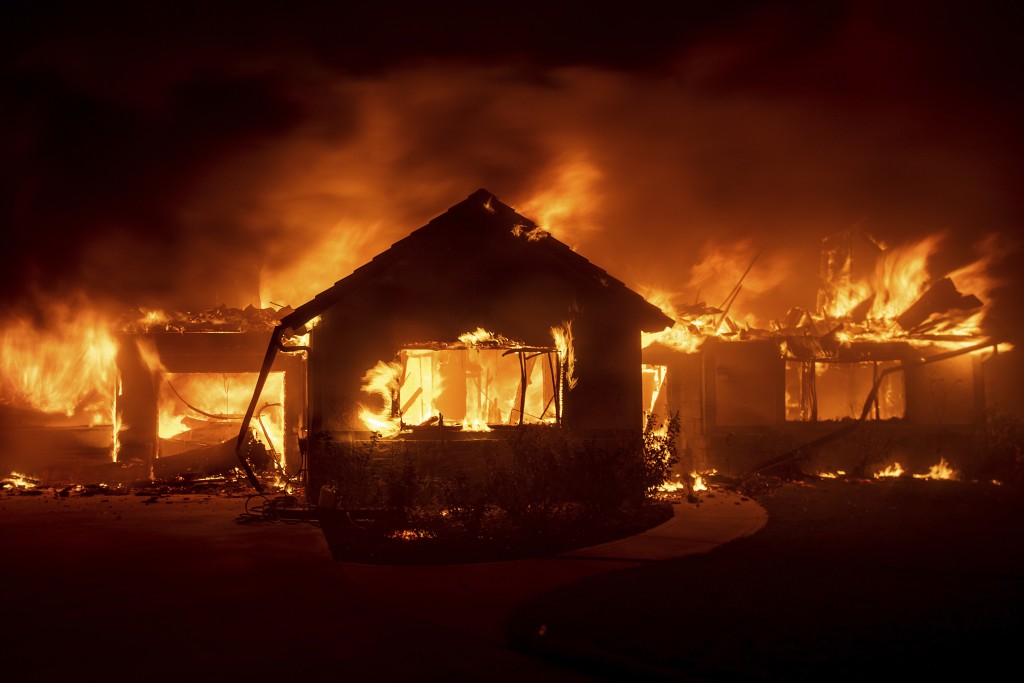 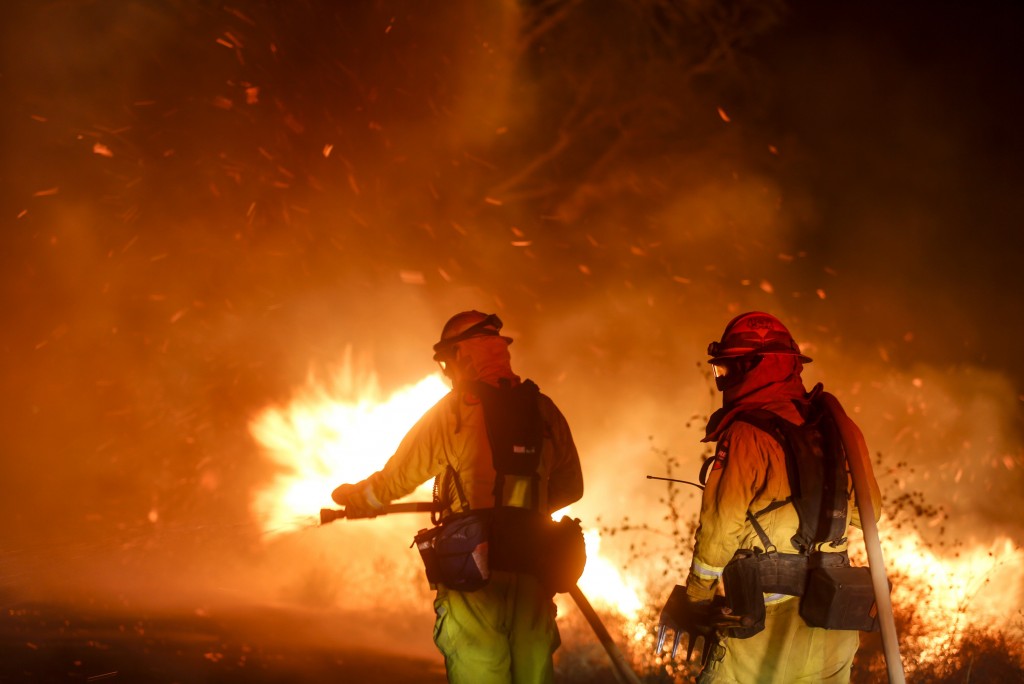 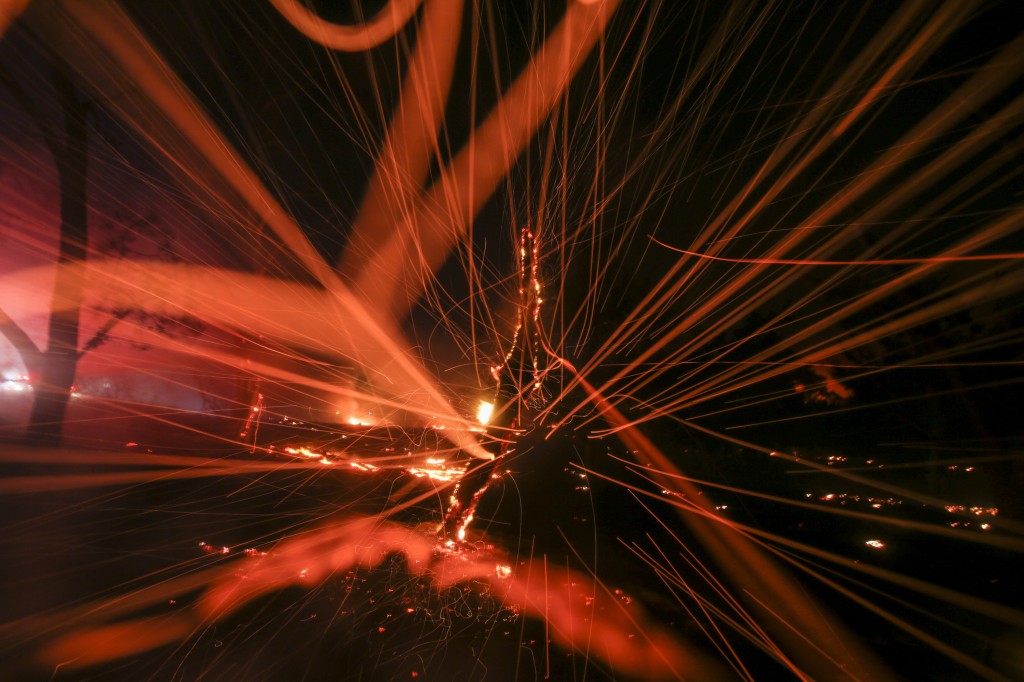 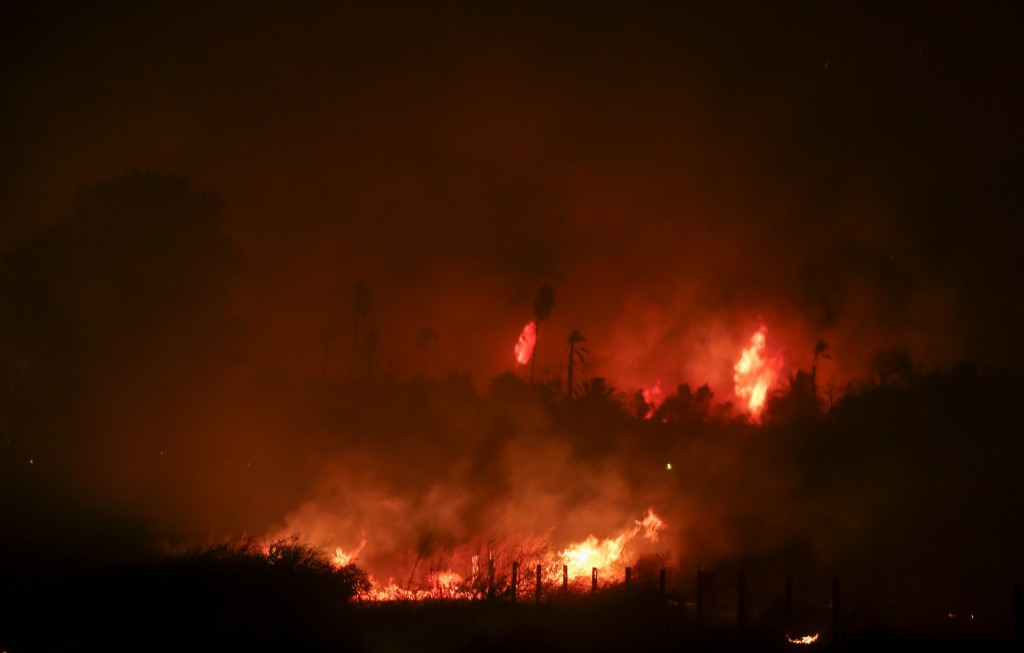 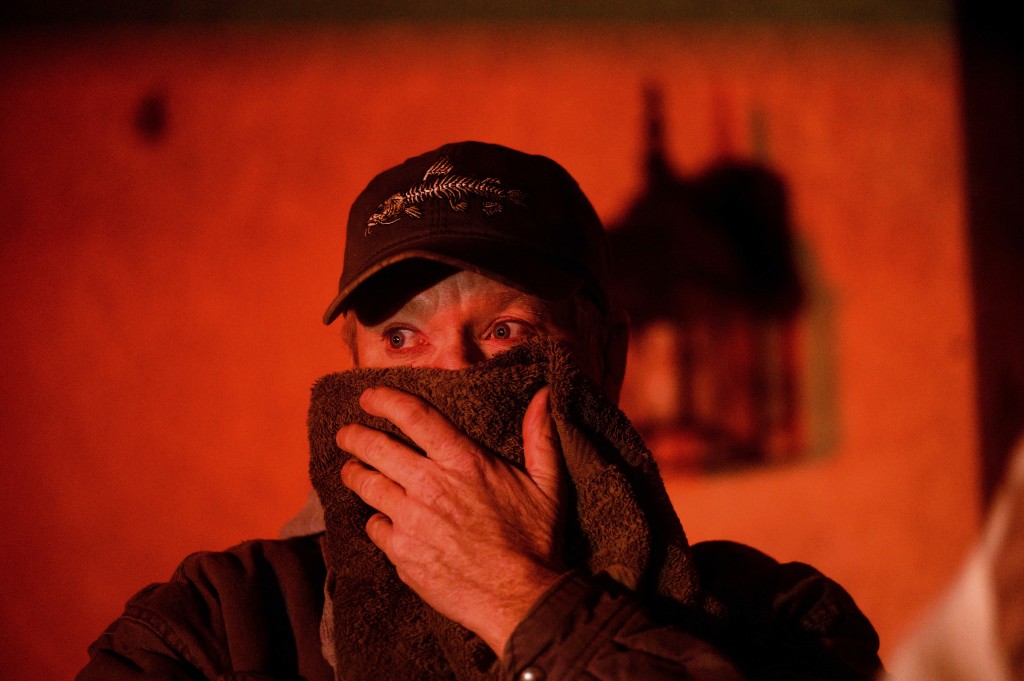 SIMI VALLEY, Calif. (AP) — Strong winds fanned new fires in Southern California on Thursday, burning homes and forcing residents to flee in a repeat of a frightening scenario already faced by tens of thousands across the state.

The latest blazes erupted in the heavily populated inland region east of Los Angeles as strong, seasonal Santa Ana winds continued to blow with gusts of up to 60 mph (96 kph) predicted to last until the evening before they fade away.

In the nearby city of Jurupa Valley, evacuation orders were issued for homes around a 150-acre (60-hectare) fire. Three residences and two outbuildings were confirmed destroyed, the county's fire department said.

That fire came after another blaze Wednesday in Jurupa Valley forced the evacuation of two mobile home parks and a psychiatric nursing care facility, where elderly people wearing face masks and wrapped in blankets were taken out in wheelchairs and gurneys as smoke swirled overhead. The blaze grew to 200 acres (80 hectares) in size before its spread was stopped.

"There was one moment when I could see nothing but dark smoke and I was like, 'We're going to die,'" said Qiana McCracken, assistant director of nursing for the Riverside Heights Healthcare Center.

The Santa Anas winds that help create California's most destructive wildfires prompted a brushfire to quickly explode in size after it broke out before dawn Wednesday near the Ronald Reagan Presidential Library between the cities of Simi Valley and Moorpark northwest of Los Angeles.

Officials ordered about 30,000 people to evacuate, although some were being allowed back home Wednesday night as fire crews began to get a handle on the blaze.

Crews remained at the scene through the night to make sure embers would not rekindle more fires after an army of firefighters helped protect the hilltop Reagan museum, which sat like an island in a soot-black sea. There was no damage, library spokeswoman Melissa Giller said.

Nearby residents had little time to heed evacuation orders as the flames approached.

Elena Mishkanian was able to gather only some basics. Her son, Troy, 13, netted six pet fish from a tank and put them in pots.

"Fish have feelings!" he said when his sister Megan teased him about it.

Frightened horses screamed in a nearby barn as Beth Rivera used a garden hose to water down the edges of her home to keep embers from igniting dry grass and trees. Friends helped evacuate 11 horses.

The cause was not yet determined, but Southern California Edison filed a report with state regulators to say it began near its power lines. Electrical equipment has sparked some of California's worst wildfires in recent years and prompted utilities to resort to precautionary power outages. SoCal Edison had not cut power in the area at the time this fire started.

As winds buffeted the state this week, utilities deliberately cut power to more than a million people to prevent high winds from damaging power lines and sparking wildfires.

Pacific Gas & Electric, which has staged three sweeping blackouts this week, restored power to hundreds of thousands of people Wednesday and expected to have it back for the others sometime Thursday.

In the Northern California city of Novato, at least 20 seniors with wheelchairs and walkers were essentially trapped , in the dark, in a low-income apartment complex during a two-day power shut-off.

The waves of days-long outages have been angrily condemned by state officials and consumers.

"As long as they remain the best tool that we have to keep people safe, and our communities safe, they're the tool we will use," he said.

PG&E equipment that wasn't de-energized may have ignited a massive blaze in Sonoma County wine country that has destroyed 133 homes.

Firefighters reported making significant progress as high winds in the area eased Wednesday and the fire was 45 percent contained.

Southern California Edison said its safety power cuts still affected about 215,000 people by late Wednesday night and warned that outages were under consideration for about 800,000 people.

The days of windstorms are not unusual for the fall season, which has seen vicious gusts propel a series of deadly and destructive California wildfires in recent years.

But at least in the short term, there was good news from forecasters.

"This is the last event in our near future. We are not expecting any Santa Anas next week," weather service meteorologist Kristen Stewart said.

But she noted the forecast only extends out seven days.

"Once we get past that, all bets are off," she said.