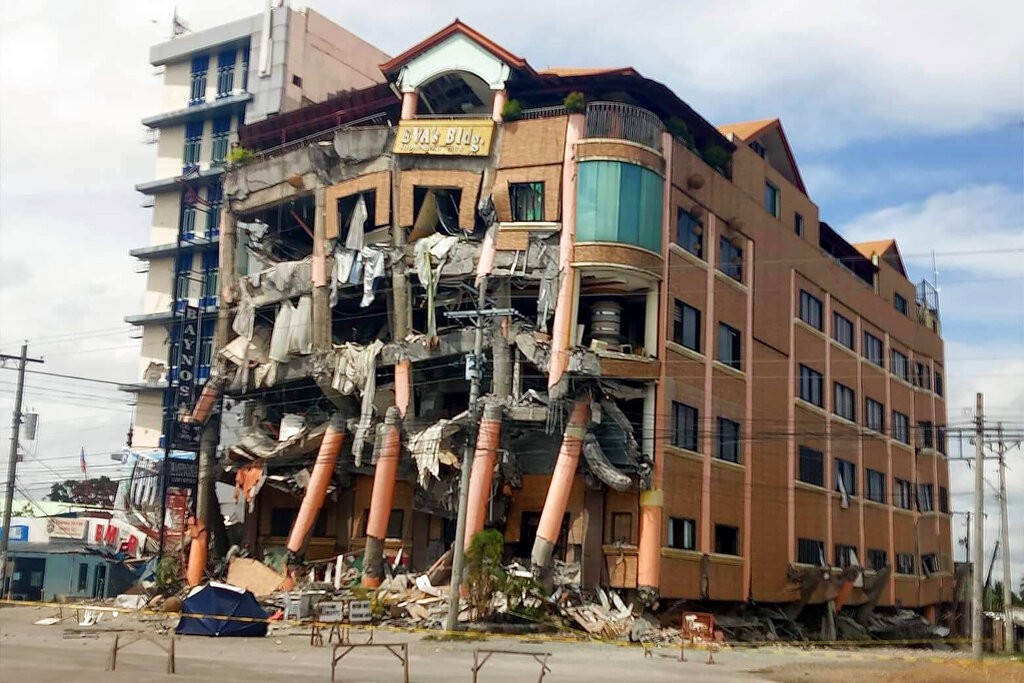 KIDAPAWAN, Philippines (AP) — The third strong earthquake this month killed five people Thursday, injured several others and destroyed buildings that were already damaged by the earlier shaking in a devastated region in the southern Philippines, officials said.

Several cities and towns in the quake-hit area suspended school classes and office work due to fear of more tremors. Many residents may have returned to already-damaged houses despite the risks because of the humid tropical heat, causing some injuries due to falling debris, officials said.

A village hall collapsed in Batasan village in Makilala town of hard-hit Cotabato province and the village leader was pinned to death, Gov. Emmylou Taliño-Mendoza said. Another man was pinned to death by a fallen tree and a woman died after being hit by heavy debris elsewhere in Makilala, government welfare officer Rosemarie Alcebar told The Associated Press by telephone. Two other villagers died due to quake-related injuries in Cotabato's Arakan town but details of their deaths were not immediately available, Alcebar said.

In Cotabato's city of Kidapawan, a small hotel partially collapsed, crushing the lobby and a bank on the ground floor and causing the building to lean on an adjacent hospital. Both the hotel and the hospital were ordered abandoned because of the previous quake damage but six employees and an engineer were inside Eva's Hotel when the ground shook at midmorning, Mayor Joseph Evangelista said.

"They're supposed to inspect the building with an engineer then it happened. They managed to run out," Evangelista told DZMM radio. The hospital and the hotel, its concrete columns precariously leaning and its rooms exposed without walls and windows, were cordoned off as they may collapse completely anytime.

In Davao city, President Rodrigo Duterte's hometown, a five-story condominium partly crashed down on its basement and rescue workers scrambled to bring out nine residents, one of whom was injured and brought to a hospital, officials said.

The residents of the 56-room building had been urged to evacuate after it was damaged by the earlier quake on Tuesday but some defied the warning. Duterte and his family were safe in his Davao city home but engineers would check the stability of his house just to be sure, said Brig. Gen. Jose Eriel Nembra, who heads the presidential security force.

The Philippine Institute of Volcanology and Seismology said the 6.5-magnitude quake was set off by movement in a local fault at a depth of 6 kilometers (3.7 miles) about 28 kilometers (17 miles) east of Tulunan town in Cotabato province. The region already was devastated by two powerful earthquakes and hundreds of aftershocks this month.

At least eight people died in Tuesday's 6.6 magnitude quake, two were missing, 395 were injured and more than 2,700 houses and buildings, including schools and hospitals, were damaged, according to the Office of Civil Defense. An Oct. 16 earthquake with a magnitude 6.3 killed at least seven people, injured more than 200 and destroyed or damaged more than 7,000 buildings.

The Philippine archipelago lies on the so-called Pacific "Ring of Fire," the arc of faults around the Pacific Ocean where most of the world's earthquakes occur.