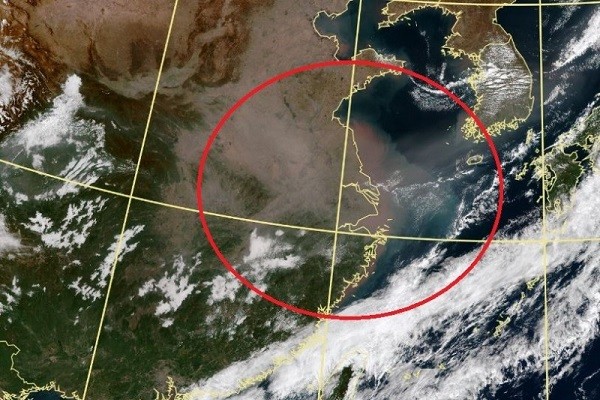 TAIPEI (Taiwan News) — A Taiwanese weather forecaster on Monday (Oct. 28) uploaded an ominous photo of a massive dust storm spotted over eastern China and warned that it could strike Taiwan by Wednesday (Oct. 30).

Cheng Ming-dean (鄭明典), director of the Central Weather Bureau (CWB) Meteorological Research and Development Center, on Monday posted a satellite image on Facebook showing a huge dust storm covering a vast swath of east China. Cheng warned that based on current weather patterns, the dust storm could descend on Taiwan Wednesday and Thursday.

Cheng said that the dust storm has shifted south into the coastal areas of eastern China. He said that based on the current weather patterns, the dust could continue to drift southward over Taiwan during the next day and a half. Taiwanese netizens expressed concern about the latest bout of bad air from China, posting comments such as "My nose will suffer again," and "Everyone should watch out for their health." However, Cheng said that a portion of the dust will be filtered out by a band of clouds and rain and that the impact should be limited, "so people should not worry too much."